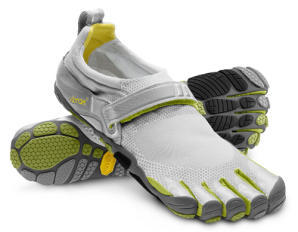 Contrary to what you may read in the coming days about a new study that just came out, Vibram just got the best Christmas present they could have received.

The question of whether minimalist running shoes reduce or increase injury risk has been debated extensively over the past 3-4 years. Much of this debate has been based largely on anecdotal reports from runners and therapists: many runners have reported resolution of long-term injuries by moving into more minimal shoes, and many therapists claim that they have seen upticks in the number of patients reporting injuries resulting from moving to more minimal footwear.

I believe that anecdotes can provide valuable information, and in this case I  do believe that individuals making these claims are speaking the truth. I believe that people have overcome injury by going minimal, and I also believe that others have gotten injured as a result (I have seen both sides in my own client population). But, what we have largely lacked to date are published studies investigating injury risk associated with footwear along the spectrum from maximal to minimal.

One such study was just published in the British Journal of Sports Medicine, and at first look it might seem to shoot down the claims of minimalist aficionados. The study, authored by Michael Ryan and colleagues, is titled “Examining injury risk and pain perception in runners using minimalist footwear.” I’m quite sure it will be the source of considerable debate, so I thought I’d give my take on the results.

The study employed a prospective, randomized controlled design (not blinded, tough to do that with shoes!), which gives it more weight than other injury studies that have been done to date on this topic (many of which are survey-based). The authors recruited participants with a minimum of 5 years of running experience to participate, and all had to be capable of tolerating a 20-40 km/week training load (in other words, these were experienced runners). A key point is that individuals who already use minimalist footwear were excluded. So, moving into minimal shoes was a change from the norm for those in the experimental groups. Thus, they were essentially studying transition injuries.

“Following a 1-week break-in period to their assigned footwear, participants began a 12-week run training programme developed by the authors targeting a 10 km run held in Vancouver, British Columbia in November, 2011. The programme followed a gradual increase in total running minutes from 160 min the first week to a peak of 215 min in week 10 before a 2-week taper. Participants did not always run in their assigned footwear, rather had a gradual increase in exposure as a percentage of their total weekly running time starting at 10 min (19% of volume) in week 1 to 115 min (58%) in week 12. If a participant felt that repeated use of a shoe was significantly contributing to pain anywhere in the lower extremity, they were given the option of withdrawing from the study.

The programme incorporated three to four run workouts a week, with a longer group run on the weekend and interval training during the middle of the week. The 2–3-weekday workouts were based on time, while the long run on the weekend was based on distance, in order to accommodate different training paces but ensuring adequate preparation for the 10 km event…it was estimated that the weekly volume started at approximately 15 km and increased to 30–40 km at the peak of the programme.”

The study authors tracked injury events (an injury was an incident that caused 3 consecutive missed runs) and pain with running at several points during the 12-week duration of the experiment.

Results for pain during running were mostly non-significant, with only calf/shin pain in full minimalist runners being significantly higher.

Based on a statistical analysis of the results, the authors conclude “Based on injury event data, there is a higher likelihood of experiencing an injury with minimalist footwear, particularly with the partial minimalist condition.” (I disagree a bit with this phrasing since injury risk was not elevated in the Vibram group)

1. The first point I’ll address is sample size. People are going to complain that sample sizes here are too small, particularly the number of people injured in each group. I’ll address this by saying that studies like this are time consuming, expensive, and not easy to carry out. So, we have to work with what we have. That being said, I do think the small samples prevented identification of some possible significant differences between groups (e.g., the Pegasus group was over 70% female, whereas the Free and VFF groups were closer to 50-50 male-female). Would the higher injury rate (20% vs. 13%) in the Vibram group have represented a significant difference if larger samples had been employed? Maybe, but we again have to work with the data in front of us. We use statistics for a reason, and the stats here say no difference in risk between the two groups.

For one example, if we wanted to ignore statistics and play the trend game with the data, we’d find that the Nike Free group had least pain in the shin/calf (is 4mm drop protective for the calf/shin vs. 12mm and 0mm???), but had the most pain in the knees (plausible case for lack of form change interacting with less cushion?). But, we can’t do this because the stats say the differences are not significant.

2. The injury rate in the Nike Free 3.0 group was indeed fairly high, and risk of injury was significantly higher than in the other two shoes. However, in the Kaplan-Meier plot (Figure 2 in the paper) as well as in the tables presented in the supplementary data, risk of injury in the Vibram Fivefingers was not significantly different from the Pegasus (for example, confidence interval for absolute risk reduction in VFF compared to Pegasus overlaps zero, confidence interval for relative risk in VFF relative to Pegasus overlaps 100% or 1 – statisticians, correct me if I’m wrong on my interpretation!).

So in reality, this study shows that transitioning to running in a full minimal shoe isn’t any more risky (or better) when it comes to injuries than continuing to run in a traditional shoe like the Pegasus. It’s moving to a cushioned but more minimal shoe like the Nike Free 3.0 that poses increased risk, and the authors suspect this may be due to the fact that the moderate amount of cushion in the Free isn’t enough to encourage form modification, and isn’t enough to protect runners who continue to run as they did in a heavily cushioned shoe like the Pegasus. Makes sense to me (and interesting personally since the Free 3.0 was my gateway-shoe to minimalism!).

3. The authors don’t talk much about pain, mainly because most differences observed were not significant (I think the sample-size effect comes into play here). The only significant difference observed was that runners in the full minimal Vibram Fivefingers reported greater pain in the calf/shin. My guess is that this was mostly calf pain (they don’t specify), as a period of initial calf pain is almost universally experienced by those transitioning into minimal shoes (myself included). The study authors explain this as follows:

I had bad calf pain when I started running in VFFs back in 2009. It was transient delayed onset muscle soreness that diminished and eventually went away after I adapted to running in the shoes (much as starting to lift at a gym can cause bad muscle pain for a period of time). It would be helpful to know if this calf pain was muscle soreness or something else, but I suspect this is something that would lessen over time.

4. I dread seeing headlines touting this study as the nail in the coffin for minimalism. You could just as easily turn it around and say that this study supports the notion that wearing a highly cushioned shoe provides no injury protective benefit over a shoe with virtually no cushion at all.

I also reject the notion that a study like this can say much about any entire class of shoes. The Nike Free 3.0 fared poorly, I don’t doubt the data. Though it is a personal favorite shoe, the Free 3.0 is fairly narrow, extremely flexible, and does not provide a lot of medial support (I moved my wife out of them because she tended to cave in the medial side of the sole). Is the Free 3.0 representative of all minimal shoes? Not at all. Just as I would not say the Pegasus is representative of all traditional shoes, or the Vibrams are representative of all fully minimal shoes (I get forefoot pain in Vibrams for example, but not in other ultraminimal shoes – something to do with the toe pockets I think).

If anything, this study shoots down claims that:

a) Minimal shoes are a panacea for running injuries. They aren’t. They can cause injuries for some, and for others they might just be the solution to a long-term injury. We’re all different, and it’s all about what works best on an individual level.

b) Barefoot-style shoes are too risky and running in them will get you injured. The results here actually suggest that transitioning into barefoot-style shoes is not as risky as some suggest (particularly those with an anti-minimal bias). I’d add the caveat that the transition should be gradual, much like the one employed in this study. But runners who transitioned from traditional shoes to Vibrams in this study were at no greater risk of suffering an injury than individuals who continued to run in a more traditional-style shoe. This is why I consider this study a Christmas present or Vibram – it gives them a prospective study in a high profile journal to cite that shows that their shoes are not any more likely to cause an injury than more typical running footwear. In fact, they are apparently safer than the Nike Free, which is one of the top selling shoes in the United States!

Update 12/25: I forgot about it when I first wrote this post, but I should point out with regard to the above statements that this is now the second study to find no difference in injury risk between minimalist shoe wearers and those in traditional shoes – I wrote about the other here (based on an abstract from the ACSM meeting).

5. It’s worth emphasizing again that this was a transition study. The Nike Free and Vibrams were novel conditions for all of these runners, and the Pegasus was presumably more similar to what they were used to. So, the study can only really assess injury risk when transitioning into minimal shoes. We really need longer term studies of how people fare in different shoes, and studies looking at how different shoes might be used to help with  (or if they are contraindicated for) specific injury types (this study did not break down injury types as diagnoses were not available). For example, I’d love to see a study on whether moving to a Vibram-style shoe helps with knee pain, or whether wearing a Hoka style shoe helps with foot pain. We need to confirm or refute the anecdotes in cases like these.

At the end of the day, what I think this study shows once again is that there are myriad options out there to choose from, and no one end of the shoe spectrum is inherently better or worse than any other. These results would not stop me from recommending a minimal shoe where I think it’s warranted, and they don’t support claims that minimal shoes are a cure-all. I sent a client home yesterday with the suggestion that he try a pair of Hokas, I myself prefer more minimal stuff. Different strokes for different folks, embrace variety and find what works for you.

For more on this study, view articles by Blaise Dubois and Craig Payne.