Home / Blog Posts / Do Runners Really Know How Much They Pronate?

Do Runners Really Know How Much They Pronate? 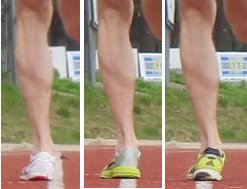 Two days ago I posted commentary on an article by podiatrist Ian Griffiths that discussed why the term “overpronation” is inaccurately applied and should be banished as a blanket criterion for assigning shoes to runners. I did quite a bit of research on this topic while writing my book, and my overwhelming conclusion was that pronation should not be given the primacy in the shoe fitting process that it is currently afforded.

One study that made a big impact on my thinking was published as part of a conference proceedings back in 2003. Titled “Do Pronators Pronate?” and authored by Stefanyshyn et al. from the University of Calgary, the study examined whether runner’s beliefs about which pronation category they belong to actually matched with how much their feet everted when measured in a laboratory (note, eversion is one component of the complex movement we call pronation and can be though of simply as the inward roll of the foot after contact).

The researchers attached markers to the legs and feet of the runners and had them run five trials barefoot and five in a neutral shoe. Runners were filmed in slow motion as they ran across a force platform – this allowed for a detailed quantification of foot eversion.

Here’s where things get interesting. The results showed that for the 41 subjects who called themselves “pronators,” only 5 fell into the “pronator” category in both the shod and barefoot conditions (12%!), and nearly 70% did not exhibit high eversion in either the barefoot or shod conditions. In other words, 70% of the runners who considered themselves to be pronators were actually well within the normal range based on the criteria established by the researchers!

Similar to the above, “normal” pronators were also pretty lousy at their self-classification. Eighteen of the 40 self-classified “normal” runners exhibited a level of eversion that exceeded the “pronator” cutoff – that’s nearly 50% of normal runners who were actually pronators based on the classification criteria.

The authors suggest that runners may define their pronation category based upon observation of their arch height, but found no significant differences between loaded arch height in the self selected “pronator” vs. “normal” groupings (the only significant arch height difference was a lower unloaded arch in male pronators compared to normal males). They also found no correlation between arch height and amount of eversion, indicating that arch height is not a valid indicator of how much a runner pronates (so much for the wet test! – for more on arch height, read this post).

Based on these results, the authors concluded the following:

Does not instill confidence that we know ourselves as well as we think we do, does it!

Even if you are an overpronator, unless it’s severe, it may not matter all that much. Dr. Benno Nigg, who was one of the co-authors of this study, states in his recent book, Biomechanics of Sports Shoes, that:

“Pronation and supination have long been the “danger variables” hanging over the sport shoe community, but their time as the most important aspects of sport shoe construction is over. Pronation is a natural movement of the foot, and “excessive pronation” is a very rare phenomenon. Shoe developers, shoe stores, and medical centres should not be too concerned about “pronation and supination.”

In his book Nigg also says that based on his extensive research into the topic, and his knowledge of the relevant literature: “overpronation, as it occurs in typical runners, is not a critical predisposition for injuries.”

(Incidentally, if you don’t know who Benno Nigg is, he’s a highly respected footwear expert and was one of the pioneers of the development of stability shoes in the early 1980’s. He has since changed his mind, and was quoted in Runner’s World saying the following: “I pushed the cushioning trend as much as anyone…And I take the blame for pronation devices as well.”)

The above information contributes to why I believe that the pronation control model of shoe fitting needs to disappear – pronation can still be considered on an individual level when problems arise, but it should not be a primary criterion by which shoes are suggested to people in a shoe shop.

Stay tuned, as I plan to follow up shortly with a summary of a more recent study that provides similar results.

You just finished reading Do Runners Really Know How Much They Pronate?! Consider leaving a comment!