Home / Blog Posts / Do You Pronate?: A Shoe Fitting Tale

Do You Pronate?: A Shoe Fitting Tale 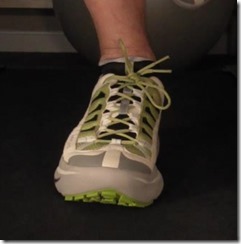 Last week I stopped by my local Dick’s Sporting Goods store one evening to pick up a pair of shoes that had just been released (yes, I know, that was my first mistake). It seemed that there was only one person working the shoe department, so I was sitting on a bench waiting for her to finish helping another customer who had arrived just before me. Listening to their conversation made me cringe.

When asked if she needed help, the woman told the clerk that she was looking for a pair of sneakers similar to the ones she was currently wearing. They were some model of Saucony, I think she called them Sonomas or something like that, so she clearly wasn’t a shoe geek. She just wanted a pair of comfortable shoes that weren’t too brightly colored.

The clerk’s next question for her was “Do you pronate?” It was all I could do to not intervene. The clerk told her that “If you pronate, you should get one of the shoes labeled stability.” The customer clearly had no clue what the clerk was asking her, and she was looking at her like she had three heads. The clerk attempted to clarify by saying something along the lines of “Do your ankles roll in?” Again confusion. I bit my tongue. No further attempt to explain, no attempt to assess. The clerk walked to the shoe wall and picked a few suggestions.

I always struggle in situations like this because I think a lot about this topic, and it was a perfect moment to help someone out and maybe educate a bit in the process. But at the same time, I’m not a confrontational sort (at all) and you never know how someone will react when you call them out [I once tried talking to the owner of a local shoe store – not a run specialty store – about his fitting process (they have a fancy arch scanner machine). I don’t think he appreciated my thoughts.]. It was pretty clear that the woman was not going to be running in the shoes based on her comments when trying them on, so I opted to keep my mouth shut.

This entire exchange reinforced for me why I hate the whole pronation model of fitting shoes. First, the question “Do you pronate?” revealed that the clerk didn’t really understand what pronation is, and was probably just repeating something she had been told to ask by a manager, brand, or store fitting procedure. The reality is that everybody pronates, and pronation is a completely normal movement. (I should note that the term pronation as used colloquially is typically equivalent to rearfoot eversion, the actual movement is a bit more complex) We might vary in how much we pronate, but asking someone if they pronate is like asking them if they breathe. I’d actually be much more concerned if the customer had revealed that no, she doesn’t pronate. At all. That would be worrisome.

The second thing that bugged me is that the customer had no clue what this clerk was talking about. So we have someone who doesn’t understand what pronation is asking a question about pronation of someone who seems to have never heard the word used before.

Third, asking someone if they pronate and expecting an accurate response is kind of silly. If you’re going to go so far as to use the level of pronation to help fit a shoe, shouldn’t you at least try to assess it somehow? Did she expect the customer to say “Why yes, I have 10 degrees of eversion.”

And finally, even if there was an accurate assessment of how much this customer pronated, I still have yet to see strong evidence saying A) how much pronation is too much for a given individual, B) that any given shoe is effective at controlling pronation when you look at the actual movement of the foot inside the shoe (and there are no data I’m aware of showing the relative pronation-controlling effectiveness of the various shoes on the market), or C) that fitting a shoe based on amount of pronation is warranted or effective from an injury prevention standpoint. I like this statement on the topic in the newly released guidelines on selecting running shoes from the American College of Sports Medicine (an interesting document that I should write about – I have mixed feelings about it on the whole):

“Be aware that all runners pronate, or drop the foot inward. Pronation is a normal foot motion during walking and running. Pronation alone should not be a reason to select a running shoe. Runners may be told while shopping that because pronation is occurring, a shoe with arch support is best. In fact, the opposite may be true. Pronation should occur and is a natural shock absorber. Stopping pronation with materials in the shoes may actually cause foot or knee problems to develop.”

For another example, Dr. Benno Nigg of the University of Calgary, one of the most widely respected experts on running shoes and biomechanics, had this to say in his 2010 book Biomechanics of Sports Shoes:

“…the perceived dangers of overpronating and the expectation of resulting injuries resulted in technologies (e.g., dual density midsoles and orthotics) being developed to decrease both the maximum pronation as well as the time to maximum pronation. These products were (wrongly) assumed to be methods for the treatment and prevention of pathologies such as plantar fasciitis, tibial stress fractures, and patella-femoral pain syndrome. Evidence for the effectiveness of such strategies is currently unavailable. It is speculated that there is no such evidence because “overpronation,” as it occurs in typical runners, is not a critical predisposition for injuries.”

“Pronation and supination have long been the “danger variables” hanging over the sport shoe community, but their time as the most important aspects of sport shoe construction is over. Pronation is a natural movement of the foot and “excessive pronation” is a very rare phenomenon. Shoe developers, shoe stores, and medical centres should not be too concerned about “pronation” and “overpronation.”

(For more along these lines, read this great article on pronation by Ian Griffiths.)

This pronation business frustrates me on a personal level because I was “diagnosed” as an overpronator when I first started running (and at the time I didn’t have the knowledge to know better). My diagnostic procedure involved me being eyeballed while trotting about 10 feet across the floor of a store. I’ve since come to realize that I do pronate a fair amount, but I seem to do better when I let the movement happen.

I’m also frustrated because I often see clients in the clinic who tell me they were sold a specific shoe because they are “overpronators.” Often these clients have very average pronation when considered in the context of the range of pronation that I have observed. Many of them are scared to try something else because they were told that they are an “overpronator” and thus need added support/stability. That’s what bothers me most. Once you get pigeonholed as a dreaded “overpronator,” fear of injury dictates your future shoe options (Don’t you dare try a neutral shoe!). It prevents you from trying something different that might be  a better match for your stride.

Coming back to the store clerk, I don’t blame her in this situation. She was probably just doing what she was told to do by management. I blame store management, or whoever helped them develop their fitting protocols. I blame brands that continue to promote this method of fitting shoes on their websites. I don’t think pronation should be the first thing asked about when fitting shoes. And if you are going to ask about it, at least explain to your employees what it is, when it might be relevant to an injury history, and train them how to assess it in a somewhat meaningful way (e.g., while someone is actually running, recognizing that there are limitations even here when you can’t see what the foot is doing inside the shoe). If you can’t do these things, don’t even bother bringing it into the fitting process.

Are there times when attempting to control pronation with a shoe is warranted? Sure, absolutely. But assigning a shoe based on asking someone “Do you pronate?” is just plain silly.

For more, you can read a free chapter on pronation from my book, Tread Lightly. Access the chapter here.

You just finished reading Do You Pronate?: A Shoe Fitting Tale! Consider leaving a comment!