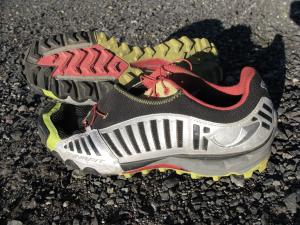 I wasn’t aware that Dynafit was in the trail/mountain running shoe market until this year when I first saw a picture of a runner from the Transvulcania Ultramarathon wearing a shoe I didn’t recognize (rare these days). After a short google search I found out they were made by Dynafit.  A month or so later, another runner recommended I check Dynafit out, so I reached out to make contact with the folks there.  They sent me a pair of the Dynafit Feline SL (Disclaimer: the shoes were provided free of charge for my review) and I’ve since put some good time in them.

When trying a completely new (to me) brand, I’m always leery when it comes to fit since you just don’t know what you are going to get.  I’m happy to say that, for my tastes, Dynafit really has a great last for the shoe and it fits my foot very well.  Medium to low volume overall with a snug heel/midfoot and medium forefoot width.  It also has a nice shape overall to the toebox that is not super squared off, yet not pointy.  inov-8 used to be the standard when it came to fit for mountain running footwear for me, but Dynafit might have just stolen the spot as best overall last for a mountain shoe.  That doesn’t mean that the upper is perfect, however.

While the shape is great, the material choice and usage is interesting to me.  The Feline SL just has too much going on in the upper in my opinion.  It looks cool, but in the end I think the shoe could have fit better, with less seams, and at a lighter weight by simplifying the overall upper design.  That said, the upper is still comfortable overall, and has so far been quite durable too.  I just think the shoe would be improved with an upper with less material overall.

One change I did make to the upper is I cut the speed laces off and replaced them with regular laces.  At first I thought the Feline SL was going to be one of the only shoes I could tolerate the speed laces on, but after a few runs with slight discomfort on downhills, I swapped them out and it made a world of difference.  To me, with regular laces, you can tighten the shoe down much better with less discomfort and you can also tighten it in specific places better too.  This is unlike speed lacing which tends to equalize the tension and also almost always uses thin, static cords that dig into my foot much more than a regular lace that disperses pressure and stretches just a bit.  A personal preference for sure, as I know others who don’t mind speed laces at all.  I’ve included pics of the shoe with the speed laces as well as with the regular laces I put on so you can see it both ways. 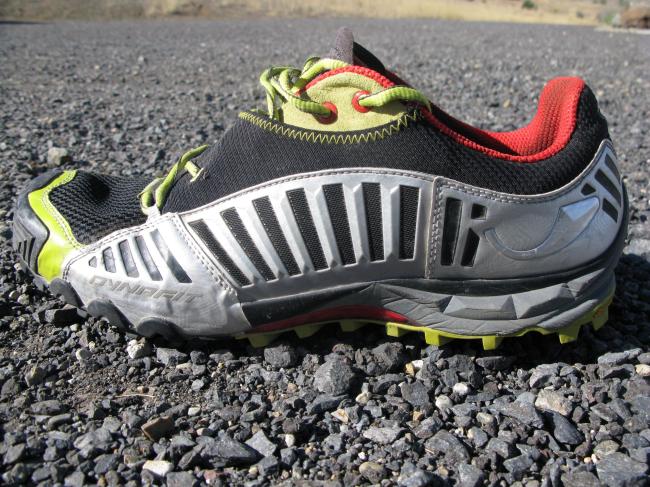 Busy upper, but functions fine. Forefoot overwrap on the side of the midsole is a nice touch that improves precision there. Pretty simple midsole setup with decent but standard EVA.

The Feline SL has a great overall ride in a mountain shoe.  I’d say its closest comparison is a cross between the inov-8 x-talon 212 and Mudclaw 300 (new red/blue version), but probably slightly more cushioned than either and more versatile since it runs better on dry trails due to a less pyramid-like lug design.  The shoe rides pretty firm with a touch of forgiveness.  This is about the sweet spot though for a mountain running shoe for me, since precision on technical terrain and off-trail is much more paramount than all-out cushion. The only addition I would make to the midsole is a rock plate in the forefoot.  I’m a big fan of rock plates on lower stack height shoes.  Recent shoes such as the adidas Terrex Boost and Montrail Fluid Flex ST (both reviews forthcoming) with rock plates done well have re-convinced me of their importance.  It adds such a huge amount of comfort and protection for a small weight cost and I would argue the slight reduction of forefoot flexibility is not even noticed, but actually appreciated, especially on technical descents.  I should note that there is a plastic insert in the midfoot that adds a nice touch of protection for the arch, but it doesn’t extend beyond that area (I wish it did!). 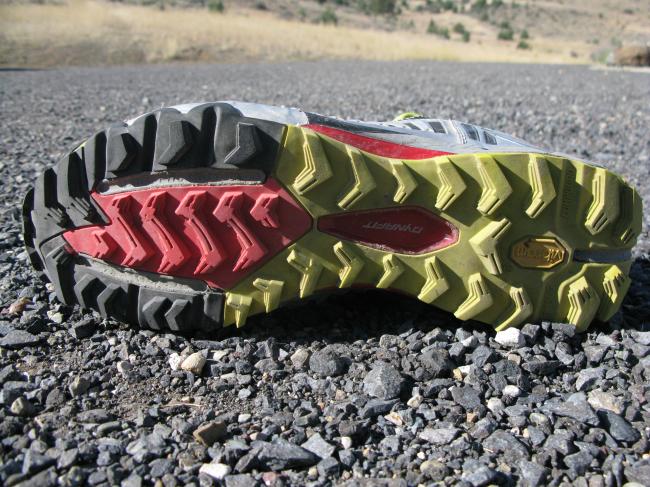 Nice overall outsole that is holding up well and is quite versatile. Noticed exposed forefoot groves, but no rock plate. Still adequate protection but would be a great addition.

A great overall Vibram outsole on the Feline SL that uses Vibram’s mapping compound, which I’ve never heard of or seen before.  The performance, however, is what you’ve come to expect from Vibram’s reputation.  While not as sticky as Vibram’s new MegaGrip compound, it provides plenty of traction for rocks, loose terrain, and even rides fairly well on hard packed trails which is less common for a shoe with as much lug depth.  From a purely shoe geek standpoint, I question some of the lug orientation on the lateral midfoot which are oriented in a breaking direction when I think they should be flipped around to allow more float on descents and would also reduce lug wear in that area.  It is not noticeably bothersome on the run, but would be a small improvement in what is otherwise a great design.

Dynafit put themselves on my radar with this shoe.  As a long time inov-8 fan, I hadn’t come across any other shoes that competed in the mountain running category with the x-talon 212 and Mudclaw 265 and 300.  With the Feline SL, I can’t say that anymore.  The shoe performs just as good or better than those inov-8s with more versatility.  The upper on the Feline SL is not on par with that of the Mudclaw 300 which is probably the best out there for a mountain shoe, but the ride and grip are great.  The price may be one other drawback.  At $149.95 MSRP I think it is probably $20 more than it should be (although they can be found as low as $80 for last seasons colors online), however, even at that higher MSRP, if you are looking for a unique mountain shoe that can hold its own in tough conditions there aren’t a ton of equivalent options out there, especially with such a great last shape.  Dynafit shows a lot of potential with this shoe and especially with the forthcoming Feline Vertical this next spring (preview post coming soon), I think mountain runners will start to take serious notice of Dynafit as a player in the quickly growing mountain running category.

The Dynafit Feline SL is available at Amazon.com.