Effect of Step Rate on Lower Limb Loading in Runners 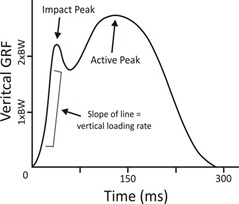 Just over a week ago Amby Burfoot wrote a post about a new study from Japan that provides additional evidence supporting the benefits of a shorter stride for reducing loading of the lower limbs. The study by Hobara et al. is titled Step Frequency and Lower Extremity Loading During Running and was published in Orthopedics and Biomechanics. I thought I’d follow up with a few thoughts of my own.

In the study, Hobara et al. wanted to determine how increasing or decreasing step rate would influence vertical impact force and vertical impact loading rate during foot strike (see first peak on the image above or read this post for a detailed discussion of these variables). Vertical loading rate has been linked to some types of running injuries (e.g., stress fractures), and the idea was to determine whether altering stride rate could lead to alteration of loading, and thus possibly reduce injury risk.

The study itself was fairly simple. They had 10 subjects run on an instrumented treadmill at 2.5 m/s (about a 10:45 min/mile pace) at five different step rates: freely chosen step rate, and –30%, –15%, +15%, and +30% of the freely chosen step rate. Modifying step rate at a constant pace results in a change in stride length, so increased step rates lead to a shorter stride, and decreased step rates lead to a longer stride. The researchers monitored peak impact force, instantaneous vertical loading rate (VILR; this is the peak loading rate observed during impact), and average vertical loading rate (VALR) as each runner ran on the treadmill.

Results are pretty well summarized in the following figure adapted from Hobara et al. 2012 (any errors in reproduction are my own – I recreated it to avoid copyright issues): 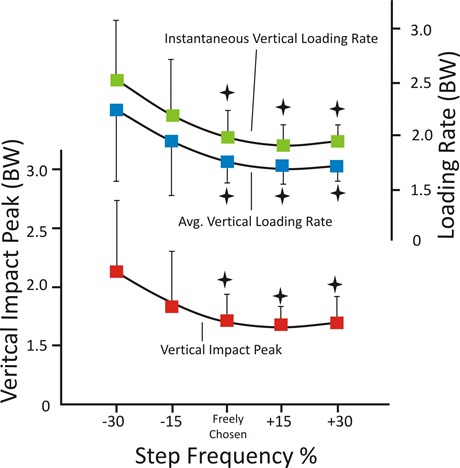 The stars in the above figure indicate values that are significantly different from that observed at the –30% step frequency. This implies that running with a really slow step rate/long stride significantly increases impact force and the rate at which that force is applied. Though there appear to not be significant differences among the other stride frequencies, a quadratic regression analysis found that impact peak, VILR, and VALR were all minimized at a step rate of roughly 17-18% higher than the freely chosen step rate (i.e., this is the low point of the black curved lines fit to the sample data for each step frequency). Data for individuals were unfortunately not provided.

This is not the first study to suggest that a shorter, quicker stride might be beneficial when it comes to reducing loading of the lower limb. Others have found similar results (e.g., read this post on stride length and leg joint loading), and the topic has received a lot of attention of late. In fact, I wrote an entire chapter on the topic in my forthcoming book that summarizes historical advice on stride length as well as what modern science has to say about the topic. I’ve come to the conclusion that stride length is likely one of the more important form characteristics to consider when it comes to reducing injury risk. Though there is a great deal of debate about proper foot strike, most people seem to agree that overstriding is bad, and there appears to be some solid science backing this up.

Limitations of this study are that it’s difficult to say whether the results are generalizable to runners across a range of paces (all ran at a 10:45 min/mile pace here). It’s also difficult to know whether treadmill-derived results are applicable to overground running. Nonetheless, the fact that these results are consistent with previous research on the topic adds further support for the use of stride length modification as one potential tool in the prevention and treatment of running injuries.