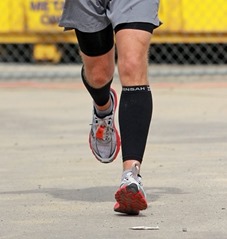 It’s becoming more and more clear based on existing research (and research coming soon) that foot strike patterns in running are influenced by a wide variety of factors. It’s not simply the case that humans use a single foot strike type under all conditions – factors like footwear, surface hardness, speed, and experience all seem to play a role.

A new study was just published on-line by Medicine & Science in Sport & Exercise that looks specifically at the influence of speed on foot strike. Previous research has suggested that some runners (not all) migrate foot strike from the heel toward the midfoot/forefoot as they run faster,  and this new study provides additional evidence to support this observation. But, it also goes beyond that finding and proposes the identification of a new foot strike type. I find this study quite compelling as it relates to my own running experience and shoe preferences!

Purpose: This study assessed initial foot contact patterns (IFCP) in a large group of distance runners and the effect of speed on the IFCP.

Methods: We determined the strike index, to classify the runners in IFCP groups, at 4 speeds (3.2, 4.1, 5.1, 6.2 m[BULLET OPERATOR]s-1) by measuring center of pressure (COP) with a 2 m plantar pressure plate. Such a system allows a direct localization of the COP on the plantar footprint and has a low threshold value (2.7 N[middle dot]cm-2) resulting in more accurate COP data at low ground reaction forces than when obtained from force plate.

Results: The IFCP distribution evolves from mostly initial rearfoot contact (IRFC) (82%) at 3.2 m[BULLET OPERATOR]s-1 to more anterior foot contacts with about equal distribution of IRFC (46%) and initial midfoot or forefoot contact (IMFC+IFFC) (54%) at 6.2 m[BULLET OPERATOR]s-1. About 44% of the IRFC runners showed atypical COP patterns with fast anterior displacement of the COP along the lateral shoe margin. Apart from the different COP patterns, these atypical IRFC were also characterized by a significantly higher instantaneous vertical loading rate than the typical IRFC patterns.

Conclusion: The IFCP distribution changes were due to intra-individual alterations in IFCP at higher speeds. That is, 45% of the runners made one or even two ‘transitions’ towards a more anterior IFCP (and 3% shows some other type of transition between initial foot contact styles as speed increases). Although, 52% of the runners remained with the same IFCP.

The authors recruited 55 runners and had them all wear the same model of cushioned, neutral running shoe (Li Ning Magne). Specs for this shoe were reported as follows for a US size 10: forefoot width 11.2 cm, heel width 9 cm, sole length 31.8 cm, heel thickness 2.9 cm, a heel toe offset of 1.15 cm, and impact testing results following ASTM F-1976-06 procedures of ~950 N or peak g of ~11.5 g. (I wish specs like this were reported for all shoes!)

The authors viewed using a single shoe for all subjects as being a more controlled situation than letting the runners wear their own shoes. I agree to an extent, but I do worry a bit about studies that put runners in novel footwear without allowing enough acclimation time (only a 5-10 warmup in the new shoe completed here). The authors acknowledge this possible limitation and they report that an initial “questionnaire did not indicate a systematic difference in habitual shoe type between different IFCP (initial foot contact pattern) groups.”

Each runner ran along a 25 m trackway at 4 speeds: 3.2 m/s (8:22/mile), 4.1 m/s (6:32/mile), 5.1 m/s (5:15/mile), 6.2 m/s (4:19/mile). The trackway was fitted with a force plate mounted with a pressure plate on top. This is a unique approach in that the added pressure plate is more sensitive at detecting smaller forces associated with initial contact and thus is more accurate at defining initial contact location.

The authors defined foot strike using the Strike Index (SI), which divides the foot into thirds from heel to toe. This is a standard method to classify foot strike in the lab, but I do agree with Daniel Lieberman who described his concerns about the ability to accurately classify forefoot strikes using SI:

“…strike index…uses the center of pressure at landing relative to maximum shoe length, with a RFS being less than 33%, a MFS between 34% and 66%, and a FFS as 67% or higher (4). This index, however, is arbitrary with respect to the foot’s anatomy. My observation is that the 4th and 5th metatarsal heads are often less than 67% of the foot’s length, leading one to classify FFS and MFS landings in the same category.”

Foot strike patterns for the left foot at each speed were classified as follows:

Foot strike patterns for the right foot at each speed were classified as follows:

These results agree with expectations based on previous research in that some, but not all, of the runners shifted from a rearfoot strike to a mid or forefoot strike with increasing speed (variation once again!). The left-right asymmetry at the fastest speed is curious, not sure what to make of that. In my own Manchester marathon foot strike study I did find that “..asymmetrical runners tended to heel strike more often on the left side, forefoot or midfoot strike on the right side.” But, that was at a considerably slower pace than 6.2 m/s.

The authors also performed statistical analyses (a three-level linear regression for you stats folks) to test for a relationship between speed and strike index within individuals. They found a significant effect of speed on strike index (faster speed = increased strike index = contact further forward on the foot), with only 3.2m/s and 4.1m/s not being significantly different. This basically means that at the two slower speeds strike index remained pretty consistent, but once pace dropped to 5:15/mile initial contact moved forward on the foot, and then moved even further forward at the fastest speed.

One fascinating thing about the results is that the authors identified a group they referred to as transition runners. 37% of subjects shifted foot strike type once at a faster speed (mostly heel to midfoot), and a second group shifted twice as speed increased (heel—>midfoot—>forefoot). In contrast, 46% were heel strikers at all speeds, and 6% were midfoot strikers at all speeds. Again, there is variation among individuals in the way they alter stride with increasing speed. The authors point out that “These ‘transitional’ runners create the complex task of a shoe design that, both at low and high running speeds, is functionally adjusted for changes in IFCP.” Or, simply, that such gear shifting runners might be best served by choosing different shoes depending on the type of workout they plan to do.

One other fascinating result is that they found two subgroups of rearfoot strikers that could be distinguished based on the underfoot pressure patterns. One group (72% of rearfoot contacts) had “…a COP trajectory with the initial contact at the posterior lateral shoe sole side, after which the COP moves rapidly towards the midline of the shoe sole.” The pressure then moves forward and takes a bit longer to reach the forefoot. You might think of this as the typical heel-forefoot roll seen in many runners (I might call it a classic heel striking pattern).

In the other group (28% of rearfoot contacts), “initial contact was made in the rearfoot zone, immediately followed by a fast anterior COP movement along the lateral shoe margin into the midfoot zone, which was then followed by the COP moving medially in the midfoot zone.” The atypical heel striking group shifts pressure to the region under the metatarsals of the foot much faster than the typical heel strike.

I’d summarize the primary conclusions of this paper as follows:

2. There are two types of heel strikers. One exhibits a slower heel-forefoot transition, which the authors term the “typical” heel strike. Overall contact time is longer in this group, but in a shoe with a cushioned heel the vertical loading rate is the same as in a midfoot or forefoot striker. The “atypical” heel strikers contact on the heel but pressure moves rapidly to the forefoot. Contact times is shorter than in a typical heel striker, but vertical loading rate is higher than in any of the other categories.

I’ll finish with some thoughts relating to the second conclusion.

I suspect strongly that my stride fits within this newly proposed atypical heel strike category, and further that this may be why I am very sensitive to firmness and amount of flare of the lateral portion of the sole of running shoes. Most of my shoe wear is a bit forward from the posterolateral corner of the heel (I used to chew that area up, not anymore), but not on the midfoot or forefoot (except maybe in very minimally cushioned shoes). Having run on a force-plate equipped treadmill I’ve been told my SI is a midfoot strike, but this did not utilize the more sensitive pressure pad method used here.

This study found that vertical loading rate was highest in the atypical heel strike group (to which I think I may belong). About this the authors write the following (my comments in parentheses):

This is brilliant. Most shoes are designed to cushion a typical rearfoot strike starting near the back of the shoe. A forefoot striker relies less on cushion and more on the calf muscles to slow the landing. An atypical contact can’t make use of either of these strategies if the shoe is not designed for it.

I find that shoes with a soft heel and firm forefoot work best for me. A shoe with an overly firm or rigid heel does not work well for me at all – I might describe the ride on pavement as jarring. Examples of shoes like this include the Mizuno Sayonara and Saucony Ride 7.  I can make such shoes feel comfortable by forcing a more pronounced heel strike or by getting up on my forefoot, but that requires conscious effort. I would be very interested to compare my vertical load rate in a shoe like the Sayonara to a shoe like the New Balance 1400v2 or Newton Energy. I’m really curious if identifying these heel strike patterns could lead to better shoe recommendations for runners, and might explain why a shoe that works well for one heel striker might not work well for another.

As always, lots of additional work needs to be done!