Finding a Runner’s High in Maine 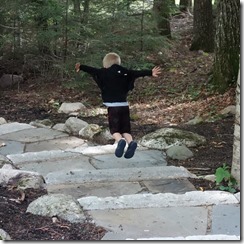 The “Runner’s High” is an elusive thing. I sometimes think that non-runners believe that we all go out there in search of the high on every run. That running is some kind of addiction. Maybe it is, but I can honestly say that in the seven years that I’ve been running with purpose I’ve felt what I might describe as a runner’s high on only a few occasions. I can probably count them on one hand.

For me, a runner’s high is not so much a state of euphoria as it is a sense of strength and invincibility. You feel like you can tackle any obstacle placed in front of you. Big hill? No problem, just power up it. Steep downhill – let’s fly (kind of like my son in the photo at the top of this post)! Your legs have an energy that they don’t usually possess – hills that might reduce you to a slog one day feel like nothing when you are on a high, and you can run a minute or two per mile faster than your usual training pace and it feels like nothing.

Last Wednesday I experienced my first runner’s high in what feels like years. I was up in Maine for a final family fling before school starts back up (and my schedule normalizes again, something I need badly!). The day was pretty much a wash-out. I think it rained as much that day in some parts of the state as it had the rest of the summer combined. But I’m in the final stages of training for the VT 50K and I needed to get in some miles.

I headed out with a plan to run 5 miles – up to the top of a ridge and back down. I told my wife that if she heard thunder she should come pick me up (thankfully it held off). The first mile was a 9:00 slog, wasn’t feeling great and I wasn’t optimistic about the run ahead. But things started to click in mile two as I loosened up and the rain started to fall a little harder. I headed up a 250 foot climb to the ridge top where I was going to turn around, and I was feeling so good I decided to add a loop along the ridge to add some distance. That’s when it hit, I suddenly began to feel a strength in my legs that has been missing for most of the summer.

I clicked off mille three in 7:35, then mile four in 7:00 and I kept feeling stronger. The rain had soaked my shirt and I was starting to feel a bit of nipple chafe so I took it off (going shirtless a rarity for me, but I’ve dropped a bit over 10 pounds this year so I wasn’t too self-conscious!). There’s something about running with nothing more than a pair of shorts and shoes on that is freeing, and doing it in the rain feels even better. Mile five went by in 6:57, mile six in 6:52.

During mile seven I headed back down the ridge and clipped off a 6:35. And for the final 0.6 I headed back up a hill toward home at 6:44 pace. I don’t think I’ve strung together 3 consecutive sub 7:00 miles since my last 5K in May, and it felt great to do so on a training run. I was elated!

I’m not sure what precipitated my runner’s high on that day. Maybe it was the cool, wet weather that felt so different from many of the hot slogs I’ve dealt with over the past few months. It allowed me to realize that my training has been paying off even if it hasn’t felt like it for much of the summer. Maybe it was simply running in a different place than I’m used to. Maybe it’s just a flukey thing that happens from time to time and it’s not possible to predict when. Maybe it was the confluence of all of these things. Whatever it was, I wish I could bottle that feeling and uncork it on the day of the VT 50K – I’m going to need all the help I can get!

How about you – have you ever experienced a runner’s high? Any thoughts on what triggers one for you?