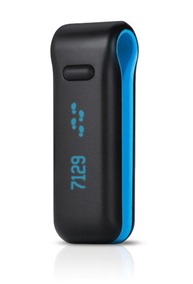 I have a confession to make: I love my Fitbit.

I’m actually a little bit addicted to it. The little guy does a good job letting me know when I’ve been a sedentary slob – a run-less day sitting at my computer will typically net me only a few thousand steps, which is my indicator to me that I did not move enough. Fitbit does not lie.

I’ve used a Fitbit Ultra for several years now, and I’ve miraculously managed to avoid losing it or destroying it. It has gone missing for days at a time, but always seems to show up again. Most often he reappears in the pocket of a recently washed pair of pants/shorts. His case is now cracking, be he keeps on working. But, I fear that if the cracks continue to grow it might soon be time for the Ultra to be retired.

My only real complaint about the Fitbit Ultra is that it seems to undercount running steps. I’m in Florida right now at Disney World and have been monitoring my steps for a forthcoming post. I’ve determined that I take about 2500 walking steps per mile (my walking cadence is about 110 steps/min). Fitbit seems to do a pretty good job of tallying my walking steps.

Running is a different story. My running cadence averages about 180 steps/min with some variation depending on speed (a bit lower for slower paces, and it can push toward 200 if I’m going sub 6:00/mile pace). If you figure an average pace of about 8:00/mile, then one mile should give me about 1400 steps per mile. As a test, yesterday I ran for exactly 40 minutes (5.19 miles) to Downtown Disney, around Saratoga Springs, and back to Old Key West where I’m staying. The ISmoothRun App recorded an average cadence of 176 steps/min for this run, and over 40 minutes that computes to a bit over 7000 steps (ISmoothRun counted 7149 steps total – held it in my hand on the run). On the same run my Fitbit Ultra clipped to my waist measured only about 4400 steps. So Fitbit appears to be recording only about 60-65% of my running steps.

I’m curious to know if others have found similar running step recording inaccuracy with their Fitbit, and whether any of the newer Fitbit models (Force, One) might perform any better?

I’m also wondering why the recording seems accurate for walking but not for running? And why my iPhone 5S measures running steps fine, but the Fitbit does not (is it just hand vs. waistband placement? – maybe need to test this by running with the Fitbit on my wrist or in hand).

In the grand scheme of things it’s really not a big deal as the real value of the device to me is the reminder that walking more makes a difference to my daily activity total and that a day below 3000 steps is bad, but as a tech junky I do wonder about how these devices work and why they might work well for one type of movement and not another.

Update: Shortly after writing this post I went for a run – 3.27 miles in 26:13. This time I attached the Fitbit to my watch band on my wrist. Result from iPhone in same-side hand was 4659 steps, whereas the Fitbit recorded 4543 steps. Much closer, so seems the loss of Fitbit step-counting accuracy while running has something to do with being placed on the waistband while running.