Home / Blog Posts / Foot Strike in Running: How Did Runners in the 1950’s Contact the Grou

Foot Strike in Running: How Did Runners in the 1950’s Contact the Ground? 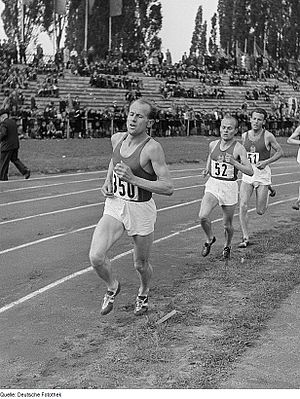 One of the difficulties that we face in trying to determine how to describe “proper” running form (if such a thing even exists) is that data on what runners did prior to the advent of modern, cushioned running shoes are hard to come by. Whereas videos of runners prior to 1970 or so are available, most are not filmed at a high enough speed to accurately analyze the more rapid motions that occur during the running stride. In particular, the question of how runners typically contacted the ground in the days before the cushioned shoe are difficult to address.

In 1964, a fascinating study by Toni Nett was published in the journal Track Technique. The paper was actually a translated English synthesis of an article published previously in a 1952 issue of the German publication “Leichtathletik,” and in it Nett reports the results of an analysis that he conducted on foot strike patterns of elite runners from the 1950’s (included in his sample was the great Emil Zatopek). Nett was able to film these runners in high-level competitions at 64 frames/second – not particularly high-speed video by modern standards, but fast enough to get a decent idea of what the feet of these runners were doing. His reason for doing this was to “throw light on the problem of more than 50 years standing: how the foot is planted.” He indicates that there had long been a polarized debate among coaches, with some insisting that “all runners at all distances plant the foot heel first,” while others insisted that “the foot is planted exclusively on the ball by all runners at all distances.” Nett was interested in determining which of these viewpoints was correct, or whether perhaps foot strike varied by event/distance run (i.e., speed).

Nett filmed runners in events ranging from 100m to the marathon and reported his results. He observed the following (image below is from Nett’s Track Technique paper):

1. All runners, regardless of event, initially plant the foot at the outside edge.

2. 100m and 200m runners initially contact high on the ball of the foot, including the joints of the little toe (Figure 1 above). 400m runners contact slightly further back from the sprinters. Nett calls this the “active or dynamic ball plant.”

3. 800m runners typically land along the length of the 5th metatarsal, with the heels and toes slightly off the ground at contact (Figure 2 above). Nett calls this the “metatarsal plant.”

5. Runners in events ranging from 1500m to the marathon contact “with the outside edge of the arch between the heel and metatarsus (Figure 3 above).” Emil Zatopek was included in this group. Nett calls this the “passive or static heel-metatarsus plant.” He found only one exception to this – one runner landed on the ball .

6. After contact, the heel touched down in all runners filmed, even sprinters.

One question that arises from these results is how to translate the above categories observed by Nett into modern foot-strike terminology? Based on the drawings above, I would suggest that the sprinting foot strike (Figure 1) is what we commonly refer to as toe running, or an extreme forefoot strike. The 800m to 1500m strike is what we now refer to as a forefoot strike since the heel does not make contact upon initial footpplant. The 1500m to marathon strike is probably what we now refer to as a midfoot strike since both the heel and base of the 5th metatarsal make contact simultaneously (this category might also include mild heel strikes, but it’s hard to tell from Nett’s descriptions). The base of the 5th metatarsal is located about midway from the heel to the base of the little toes, and if you try to place your foot down so that it contacts at both the heel and this location simultaneously, you will see that contact is roughly along the entire outer margin of the foot.

Based upon his observations, Nett makes the following conclusions:

1. The sprinting foot strike allows for a fast pace, but is “rather energy- consuming.”

2. The “metatarsal plant” is intermediate in terms of strength requirement and is thus suitable for middle distances.

3. The “static heel-metatarsus plant” is an endurance gait since it requires the least energy per step, but it is not suitable for high speed.

Nett emphasizes that foot-plant is correlated strongly with pace, and he recounts his observation that when sprinters run in a more long-distance situation, they adopt a foot plant like that seen in Figure 3 above. Because of this, he cautions us to not make conclusions on the foot plant of individuals based on still race photos since a middle distance runner sprinting to the finish line will adopt a sprinter’s footstrike (he is a believer that only high-speed video can truly provide an accurate assessment of foot strike – personally, I agree).

Nett goes so far as to say that “foot-plant evidently follows laws that lie outside the person, that lie in the rate of running speed.” In other words, foot strikes that he observed were so consistent in the different events that the speed at which an individual was running was a better predictor of foot strike than any type of inter-individual variation. In contrast, other aspects of running form (trunk, arms, head, etc.) were so variable that “not even remotely can so uniform a picture be obtained.” He considered these other factors to be elements of individual style rather than related to speed or the event being run.

Based upon all of this, Nett concludes that “shifting (of foot plant) the runner does unconsciously; but he correctly adapts it quite instinctively and reflexively to the distance as related to the pace.” Thus “arbitrarily interfering with the foot-plant of top-notch runners might therefore, be wrong because (sic) unsuitable.”

I find all of this fascinating because it provides a window into what runner’s did before the advent of the modern running shoe. Unfortunately, Nett was filming elites of the day, and it is difficult to compare these individuals to modern recreational runners. However, it does not seem that Nett observed any of the overstriding, massive heel strikers that are so commonly observed in modern races (even sometimes among very high-level runners). As an example of the variation seen among modern runners, take a look at the photo below showing foot strikes of runners from mile 20 of the 2009 Manchester City Marathon (yes, that is a Vibram Fivefingers heel striker – he’s a friend of mine – his quads locked up and he had to stop and walk most of the last six miles after this photo was taken):

Clearly we now see a lot of variation in foot strike, but we still have very little idea of how this variation might relate to either performance or injury risk. We also have little idea of how much of a role footwear plays in determining footstrike, as it is clear from the above that we see all types of foot strike variants even in similar types of shoes (though the vast majority of modern runners do land on their heels with no simultaneous metatarsal contact – a category not observed by Nett).

As far as the role of speed/event, the following video of elite female milers from the 2010 5th avenue mile shows that most are either midfoot or forefoot strikers:

Whereas this video of elites from the 2010 Boston marathon shows a mix of different types of footstrikes:

I will point out that I don’t think the reason that modern recreational runners are overwhelmingly heel strikers is due to their slower speed – I do think footwear is a big part of it. As one example, here is Paul Tergat on what appears an easy jog – he’s clearly not heel striking (n =1, but interesting nonetheless):

And I’ll finish with this great video of Herb Elliot from 1960 – just because it’s a thing of beauty:

You just finished reading Foot Strike in Running: How Did Runners in the 1950’s Contact the Ground?! Consider leaving a comment!