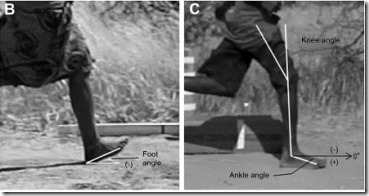 Yesterday I wrote a post about a study that examined foot strike patterns in Tarahumara Native Americans from Mexico. That study found that Tarahumara who habitually wear and run in minimal huarache sandals exhibit a mixture of foot strike types (40% midfoot, 30% forefoot, 30% heel), whereas Tarahumara who habitually wear and run in conventional running shoes heel strike 75% of the time. These results indicate that footwear can influence foot strike type, but that even within the minimally shod group foot strike patterns are highly variable.

In this post we’ll take a look at another study that examined foot strike patterns in a population that habitually wears minimal footwear. This study, led by Herman Pontzer, looks at Hadza hunter-gatherers from Tanzania, Africa. Like the traditional Tarahumara huaraches, the Hadza tend to mostly wear minimal sandals made out of repurposed tire rubber.

The Hadza are an interesting group in which to study running form since adult males and females exhibit a division of labor. Adult females spend the day gathering foods like berries and tubers, whereas adult males hunt game and collect honey. Both groups walk a lot, and though running is not a common practice, it is presumed that males engage in running more frequently during hunts. This difference allows for some insight into the role of running experience in contributing to variation in running form.

Here’s the abstract to the study (full-text available here):

Journal of Sport and Health Science

Investigations of running gait among barefoot and populations have revealed a diversity of foot strike behaviors, with some preferentially employing a rearfoot strike (RFS) as the foot touches down while others employ a midfoot strike (MFS) or forefoot strike (FFS). Here, we report foot strike behavior and joint angles among traditional Hadza hunter-gatherers living in Northern Tanzania.

The researchers traveled to Tanzania and recruited 26 Hadza adults (15 men, 11 women) and 14 juveniles (mean age = 8.6 years) to run trials while being recorded by a high-speed camera. The subjects ran along a hard-packed sand/silt trackway cleared of shrubs and loose rocks. Ankle, knee, and plantar foot angles were measured at initial foot contact from the video sequences. Some of the adults ran barefoot, others ran in minimal sandals. All of the juveniles ran barefoot.

No significant differences in foot strike patterns were found between barefoot and minimally shod adults (though non-significant, heel striking was actually more frequent in the barefoot condition). Speed was not found to significantly influence foot strike (though the sample was small for this subset of data). No forefoot striking was observed in any of the trials. Joint angles did not differ between the groups.

What I like about this study is that it may provide some evidence that running experience has an influence on the development of certain aspects of running form, in this case foot strike. Hadza children overwhelmingly tend to heel strike when barefoot, as do adult Hadza women. In contrast, adult Hadza males tend to midfoot strike when running. The authors write the following as a potential explanation of this pattern:

“This pattern of foot strike usage suggests running experience may be important in developing foot strike preferences. As children learn to walk and their gait matures, RFS develops as a normal part of the walking gait cycle;20 thus RFS is the behavior learned first. As the musculoskeletal system and motor control develop further during adolescence, experience running barefoot or minimally shod may lead to a preference for MFS or FFS during running, perhaps in response to the high impact forces21 experienced when running with RFS. Individuals who rarely run might not have the same accumulated experience of high impact forces due to RFS, and thus never switch from RFS to MFS or FFS for running.”

They point out that the only two adolescents who were classified as midfoot strikers were the two oldest boys in the group, and suggest that:

“…the change in foot strike behavior by Hadza men may develop as they learn to hunt and track wild game. While Hadza men do not typically engage in endurance running, it is likely that they run more often as they learn to hunt than their female counterparts do in learning to gather plant foods. Indeed, our measurements of travel speeds used while out of camp on forays, taken using wearable GPS devices,16 indicate that men use running speeds approximately twice as often as women.”

For me, the most surprising result in this study was the pattern observed for the Hadza children. If you asked me how I thought a group of kids who are typically barefoot or shod only in a pair of sandals would strike the ground when running barefoot, I would have guessed an overwhelming majority would be mid- or forefoot strikers. This study demonstrated the exact opposite – almost all were heel strikers. If you think heel striking is abnormal or bad, just think about that for a second. It’s not as simple as saying that barefoot runners forefoot strike, or that kids never land on their heels. It’s more likely that foot strike is determined by a number of factors, among which are experience, speed, surface properties, footwear, fatigue, and so on.

I’ll finish by saying once again that I don’t believe there is a perfect or “natural” running form that applies under all circumstances. Rather, form is determined by properties of the individual and the characteristics of their immediate running environment. There are things that many people could do better (e.g., reduce overstriding, better hip stabilization), but to say that every person should run a certain way simply does not sync with the range of variation we see, even in populations that are habitually barefoot or minimally shod.