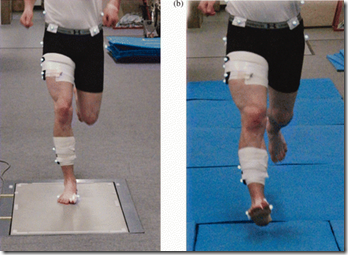 In this post we’ll take a look at another study on foot strike, in this case the influence of surface hardness on foot strike type in habitually shod runners who were asked to run barefoot in the lab. The study, led by Allison Gruber, was published in 2013 in the journal Footwear Science. They were interested in trying to determine whether pain associated with a barefoot heel strike on a hard surface might trigger a shift to a midfoot or forefoot strike.

Here is the abstract (full text is available here):

Footfall patterns during barefoot running on harder and softer surfaces

The researchers recruited 40 habitually shod runners who were confirmed to be rearfoot strikers in their typical training shoes. They had each runner run trials in the lab along a 25 m runway equipped with a force platform. Trials included two conditions: 1) concrete runway with no cushioning (the hard surface); 2) runway covered with 20mm EVA foam mats to simulate characteristics of a shoe midsole (the soft surface). Foot strike patterns and a variety of other biomechanical measurements were recorded for each subject in both conditions.

The results here could also explain why habitually barefoot or minimally shod people like the Daasanach, Tarahumara, or Hadza children and adult women have been observed to heel strike while running slowly on natural sand/dirt surfaces, whereas experienced Kalenjin runners moving fast tend to midfoot or forefoot strike on such surfaces. It might also explain why approximately 50% of runners in Vibram Fivefingers have been observed to contact on the heel when running on asphalt – there may be just enough cushion present in minimal shoes to allow this to be done comfortably if the pace is not too fast.

One interesting finding here was that 20% of the runners switched from their typical heel strike in shoes to a midfoot or forefoot strike even on the soft surface. The authors reported in their Discussion section that some of these subjects had previous experience with barefoot running, and that they indicated that they were more comfortable with the MFS/FFS when running barefoot. In other words, previous experience running barefoot could have led to development of modified form in this condition (similar to the role of experience in the Hadza runners). I would also suggest that even though cushion is present in both conditions, plantar sensation when running barefoot on a mat vs. with a shoe on the foot might differ and could explain some of these changes.

One other interesting finding was that 35% of subjects continued to heel strike when running barefoot on concrete. The authors suggest that the lab runway may not have been long enough to induce discomfort necessary to trigger a change in foot strike. However,  I have observed a similar proportion of barefoot runners heel striking on asphalt during a race, so length of the runway may not have been the only factor. It may be that a move to a less prominent heel strike could make barefoot heel striking comfortable enough for some runners, or it could be that some runners need more experience before adopting a different foot strike when barefoot on a hard surface.

As with most studies, this one provides some answers but also raises new questions. For example, I wonder if there is an individually specific threshold combination of speed and surface hardness that triggers a shift in foot strike to attenuate the impact forces associated with a heel strike? Also, why do some people shift but others do not? How much experience is required for a shift to occur, and are there some people who will never shift their foot strike? What role does plantar sensation or abrasions with the ground surface play in determining foot strike? To me, the continual search for answers to questions like these is what makes science so much fun.