Back in 2011 I attended the New York City Barefoot Run. I was in town for a meeting organized by Merrell Footwear (they invited a bunch of folks – scientists, writers, journalists, runners – to talk shoe trends), and the Barefoot Run was included on the list of events for the weekend. Rather than participate in the run, I opted to bring along my high-speed camera and use the opportunity to get some video of foot strike patterns.

I planted myself behind a bush about a quarter-mile from the starting line, and wound up getting slow-motion video (300 frames/sec) of 169 barefoot runners, and 42 runners wearing Vibram Fivefingers shoes (other footwear were represented as well, but sample sizes were small). My goal was to compare foot strike patterns between these two groups, as well as to compare patterns to those observed in other studies published on recreational runners wearing typical cushioned shoes.

I didn’t really do much with the video for a few years. I’d had some students analyze some of it for a senior research project, but the data needed some work if it was going to be publishable. Last Spring I met Martyn Shorten, head of the Runner’s World Shoe Lab, and we were chatting about our mutual interest in filming road races to look at form. When I told him about the NYC dataset he urged me to publish it, and put me in touch with Daniel Lieberman and Irene Davis. They were organizing a special edition of the Journal of Sport and Health Science on the topic of barefoot and minimalist running. They encouraged me to analyze and submit the data for publication – it was the push I needed, and I got it done.

The article I wrote was just published on-line – you can read the full text here. Here are the key points (note – midfoot strike means simultaneous contact of the heel and base of the fifth metatarsal):

2. For minimally shod runners: 33.3% were forefoot strikers, 19.1% were midfoot strikers, and 47.6% were rearfoot strikers. Yes, almost 50% of the runners wearing Vibram Fivefingers contacted first on the heel.

3. The foot strike distributions were significantly different between the two groups.

4. Foot strike distributions for both groups differed from previously reported distributions in shod road runners (where ~90% of runners tend to heel strike).

What does all of this mean? Here’s my take on the significance of these results:

1. Barefoot runners are less likely to heel strike on asphalt than both minimally and traditionally shod runners. That being said, some barefoot runners (about 1 in 5) do continue to contact initially on the heel. This could be due to a lack of experience with barefoot running for some subjects observed. Anecdotally, my experience is that some people will immediately switch to a forefoot strike when you take their shoes off, others do not. Research suggests that for some people foot strike may change with experience. It could also be the case that a mild heel strike as typically exhibited by the barefoot runners is not a problem on a hard surface.

2. It is not easy to quantify and I did not attempt to do so in the paper, but the heel strikes observed in barefoot and minimally shod runners were typically not characterized by the extreme dorsiflexion you sometimes see in traditionally shod runners. For example, you don’t tend to see this type of pattern: 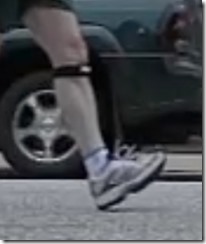 I’ve previously written about the fact that not all heel strikes are the same – we are beginning to realize that there is a lot of variation in how forces are applied even with the category we refer to as a “heel strike.”

3. The minimal shoe pattern differed from the barefoot pattern. Why? First, it’s possible that the Vibram runners were less experienced and thus opted to wear shoes rather than run barefoot in this “barefoot” race. Thus, they may not have had as much time to adapt their form. Second, the Vibram shoes may have provided enough cushion to make a heel strike on asphalt comfortable. Third, it may be that some factor other than a lack of cushioning is responsible for the reduced frequency of heel striking in barefoot runners. For example, a shoe sole also provides resistance to abrasion/friction with the ground. Removing that sole may require modifications of form to prevent damage to the plantar skin that are not required even when wearing a very minimal shoe.

What I’ve come to realize over the past several years is that determination of foot strike is multifactorial – I don’t think there is one right answer that applies to all conditions (and we now have evidence that some habitually barefoot humans heel strike a lot). The specific foot strike adopted by a given runner likely depends on some mix of footwear, running surface, running speed, running experience, etc. If you want to maximize the likelihood of observing a forefoot strike, I think you look at an experienced runner who is A) barefoot, B) has previous experience running barefoot, C) is running at a relatively fast pace, and D) is running on a hard surface like and asphalt road. That doesn’t mean that all runners under those conditions will forefoot strike, but I think the combo is most likely to encourage a form change from what we typically see in conventionally shod runners.

I elaborate on these points in a lot more detail in the actual paper, which you can read here. If you have any questions/thoughts, feel free to leave a comment.