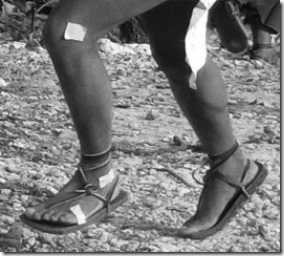 I’ve written a lot about foot strike variability over the years, but I still see people make claims that heel striking is bad, or that barefoot and minimally shod runners don’t land on their heels.

Personally, I view foot strike as one aspect of running form that varies with a range of factors. These factors would include running speed, running experience, surface hardness, surface incline, fatigue, footwear type or the lack thereof, etc. For example, I think we tend to see a shift more toward the forefoot side of the spectrum when experienced runners run fast on hard surfaces, particularly if barefoot. We see a shift more toward the heel strike side when inexperienced runners run slowly on soft surfaces or in heavily cushioned footwear. Mix and match these factors and we can get a variety of different foot strike types, and it’s unlikely that any one set of conditions will yield identical responses in all runners exposed to them (because people are variable).

As an example of the influence of both external variables on running foot strike and individual variability within the same condition, I thought it might be interesting to take a look at a research study that was published last year. Authored by Daniel Lieberman, the study takes a look at foot strike patterns among traditionally shod and conventionally shod Tarahumara Native Americans from Mexico (full text is available here). The running prowess of the Tarahumara was made famous by Christopher McDougall in his book Born to Run. That book, published in 2009, was largely responsible for kicking off the form and footwear debates that ensued over the following years, and the Tarahumara thus make for a great running form case study.

Here’s the abstract of the study:

These data reinforce earlier studies that there is variation among foot strike patterns among minimally shod runners, but also support the hypothesis that foot stiffness and important aspects of running form, including foot strike, differ between runners who grow up using minimal versus modern, conventional footwear.

Lieberman traveled to Mexico and collected kinematic data from 20 Tarahumara. Twelve of these individuals wore only traditional huarache sandals (see photo at top of post for image of huaraches), and eight wore conventional running shoes. After a five minute warmup, subjects were filmed while running 15 meters along a flat, natural surface free of grass and rocks. Each subject ran the 15 m trials until three usable videos were recorded for each. A variety of biomechanical variables were measured from the video sequences.

Minimally shod Tarahumara that ran their trials in huarache sandals exhibited the following foot strike patterns: 40% midfoot strike, 30% forefoot strike, 30% heel strike. In contrast, Tarahumara in conventional running shoes landed on the heel 75% of the time and on the midfoot 25% of the time. No forefoot strikes were observed in the conventionally shod runners. Of the other biomechanical variables measured, only overstride angle differed – minimally shod runners tended to land with the ankle in a position more underneath the knee at ground contact.

These results demonstrate two things to me:

1. Footwear does have an influence on foot strike. Those Tarahumara who typically wear conventional shoes and ran their trials in this type of shoe tended to heel strike 75% of the time. This is consistent with other studies that have found that 75% or more of traditionally shod runners land first on the heel.

2. Foot strike patterns are variable in Tarahumara runners wearing huarache sandals. Almost a third of them heel strike, and there is no overwhelmingly predominant pattern exhibited by this group. Lieberman himself writes: “…minimally shod Tarahumara runners appear to be best characterized as midfoot strikers who also employ forefoot and rearfoot strikes. These data therefore partially support but also modify earlier anecdotal reports that Tarahumara runners who use huaraches primarily FFS (forefoot strike).” As the source of these anecdotal reports, Lieberman cites McDougall’s book Born to Run and Scott Jurek’s book Eat and Run.

So here we have two levels of variability. Variability among groups due to the type of footwear typically worn, and variability within groups wearing similar kinds of footwear. It’s not as simple as saying that all huarache-wearing Tarahumara forefoot strike, and this suggests that there is no “perfect” or “natural” running form or foot strike that is or should be used under all circumstances by all people. Rather, running foot strike is dictated both by external influences (footwear here) and individual variation in response to a given set of conditions.

To me, this combo of adaptability and variability is what makes the study of human running form so fascinating – we are amazing and complex animals, and this is exhibited by both our incredible running ability as well as how we run.