Foot Strike Patterns of Runners at the 2012 Western States Ultramarathon 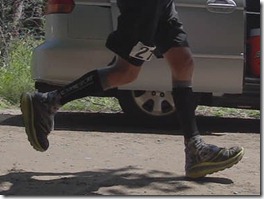 A friend on Twitter (thanks Josh N.!) forwarded me a link to a post on the Sharman Ultra blog that discusses research results from the 2012 Western States Ultramarathon.

A group of researchers had set up a study to look at foot strike patterns and stride characteristics of runners at several points in the race, and the post provides the text of an email summarizing their results (the blogger, Ian Sharman, had run in the race). In a nutshell, here’s what they found:

3. No relationship was observed between foot strike pattern and performance (I found the same among marathoners).

Making the likely assumption that all of these runners were shod, and that most were wearing somewhat cushioned shoes, these results don’t surprise me and are in line with my own findings on foot strike patterns among shod runners in a road marathon (I also did a bit of filming at the VT100 this year and would guess the results would have been similar there). It may turn out that in some of the locations heel striking in trail ultramarathoners was a bit less common than in road marathoners (I observed 88.9% heel strikers at the 10K point of a road marathon), but we’d need the raw numbers to address that (not just a range).

It’s also important to note that neither this nor my study examined variation among heel strikers – there is a great deal of variety in the amount of dorsiflexion at ground contact among heel strikers, and lower limb orientation is also highly variable – heel striking isn’t really a category so much as a spectrum that encompasses a wide range of variability.

What I like about studies like this is that they provide data on what runners in the “real world” do outside of an artificial lab environment. This study provides further evidence that when distance runners wear shoes, even those who run huge mileage on trails, they tend to land on their heels most of the time. The results don’t provide insight on whether heel striking is good or bad, and if anything they suggest that at least from a performance standpoint it doesn’t much matter how your foot contacts the ground. All of this contributes to my belief that as long as it’s not too extreme, it’s OK to be a heel striker!