Forefoot Striking and Pronation: Insight from an Ultrarunning Podiatry Student 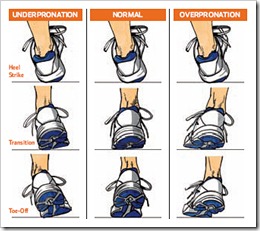 Image from the Runner’s World Wiki

Just before Christmas I received a very thoughtful and well researched email from ultrarunner Phil Shaw. In addition to being a very successful long distance runner, Phil is also pursuing a doctoral degree in podiatric medicine – quite a dangerous combination!

Like me, Phil feels that the current paradigm of attempting to control foot motion through fancy shoe technology of questionable effectiveness has gone too far (for more on my thoughts about this, check out my post on the “pronation control paradigm”). He wanted to share with me some thoughts he had put together on the topic as a result of an extensive review of the scientific literature on barefoot running and forefoot striking and how they can both help reduce pronation without any need for external technological intervention. Phil’s work largely speaks for itself, and I’d like to thank him for allowing me to share it here on Runblogger. Enjoy!

Forefoot Striking and Pronation: What Science Tells Us

It doesn’t take much time on the internet to realize that when it comes to minimalist and barefoot running, scientific evidence is spotty at best. Instead, one finds an abundance of anecdotes and an occasional citation. In an effort to parse the strong evidence from the weak, a few fellow doctoral students and I recently wrote a literature review of barefoot running biomechanics. Our goal was to formulate a complete and evidence-based biomechanical model of barefoot gait and describe its potential implications for overuse injuries. Ultimately, we reviewed 39 papers that met our inclusion and exclusion criteria. The publications covered many subjects relevant to barefoot running, and our review is beyond the scope of this blog (like most scientific papers, too dense as well!) but one pattern in particular may be of interest to minimalist runners. I’d like to share it with readers of Runblogger.

First, let me introduce myself. I’m 25 and I’ve been running ultramarathons for 9 years. I’ve raced 12 mountain 100 milers, won a couple of them, and run a 2:39 marathon. I usually run around 90 miles per week. I’m currently in podiatric medical school seeking my doctorate in podiatric medicine (DPM). I’ve been running exclusively in minimalist shoes (Brooks Mach 11 mostly) since Summer 2010, and generally I’ve benefitted from the change. Obviously, there is some personal motivation in my interest in running biomechanics.

One of the most frequent claims of barefoot and minimalist running advocates is that a forefoot strike reduces impact forces. I’d like to examine how those impact forces are attenuated in a forefoot vs. heel strike, and what it might mean for overuse injuries. Instead of focusing on impact force magnitude, which may or may not be implicated in overuse injuries, let’s look instead at pronation. Excessive pronation is associated with multiple overuse injuries including those awful nemeses plantar fasciitis, medial tibial stress syndrome (aka shin splints) and patellofemoral syndrome (aka runner’s knee). From our review of barefoot running, we found a pattern suggesting that a forefoot strike may reduce pronation compared to a heelstrike.

Six studies explicitly compared rearfoot motion in subjects running barefoot and shod. Of those six studies, three found a significant reduction in rearfoot pronation in barefoot runners,1,8,11 two studies found no difference between the conditions,4,12, and only one study found greater pronation when subjects ran barefoot.9 This is hardly an strong trend, but when we looked more closely, we found that all but two of the studies required participants to be heel-strikers (Runblogger’s note – unfortunately, this requirement is quite common in the scientific literature on running mechanics). Of those two studies that allowed forefoot striking, both found a significant reduction in rearfoot pronation when barefoot.1,11 Additionally, Morley et al. 2010 found a reduction in pronation when heel-strikers ran barefoot. Interestingly, individuals with the greatest pronation saw the most reduction in rearfoot eversion. Of the two studies that found no difference between conditions and the single study finding more rearfoot eversion in barefoot runners, all required participants to heel strike. Additionally, all studies agreed that rearfoot eversion velocity was slower in barefoot runners, suggesting that the pronatory motion is more controlled when barefoot.

What do these results imply? Not much, until we look at one more finding. Of seven studies that investigated sagittal plane motion at the ankle (I.e. dorsiflexion and plantarflexion, or pointing the front of the foot up and down in side view), all agreed that barefoot runners strike the ground with a significantly more plantarflexed foot (front of foot angled more downward).1-3,5-7,10 Even in studies that required subjects to be heel strikers, subjects struck the ground significantly more plantarflexed. Furthermore, the longer the accommodation period to barefoot running, the more the runners plantarflexed at contact. In other words, with more time running barefoot, runners are more likely to land with a midfoot or forefoot strike. This is most evident when subjects are “habitually barefoot runners,” meaning they’ve run barefoot or in minimal shoes for at least six months, but the trend is evident after just 4 minutes on a treadmill in runners who never train barefoot. Avoiding a heel strike is clearly an adaptation mechanism when the foot has minimal cushioning available.

We know that barefoot/minimal running is associated with a significantly more plantarflexed foot at contact. We also see data suggesting reduced pronation when runners shift toward a forefoot strike. We concluded that a forefoot strike may therefore reduce rearfoot pronation. Why might this be?

In a forefoot strike, impact forces are attenuated through a combination of rotational motion at the ankle joint and energy storage in the elastic Achilles tendon. Some pronation occurs, slowed primarily by the tibialis posterior muscle (the primary inverter of the foot and supporter of the arch). In a rearfoot strike, the ability to dissipate energy through ankle joint rotation and store potential energy in the Achilles tendon is dramatically reduced. Motion that would occur at the ankle joint occurs elsewhere: the subtalar joint (the joint in the rearfoot between the talus and the calcaneus that allows one to invert and evert the foot). Instead of sagittal plane motion at the ankle, the subtalar joint pronates excessively in the frontal plane, and it pronates very rapidly. In other words, heel striking may cause excessive pronation because impact forces cannot be transmitted through a mobile ankle to the gastroc-soleus complex (calves). Rather, the body dissipates impact forces at a different joint in a different plane of motion.

We reviewed many other facets of barefoot running, such as knee joint motion, shear forces, plantar pressures, and more. The idea that a forefoot strike in a minimally cushioned shoe without pronation control could actually reduce excessive pronation, however, was particularly interesting to me. I hope readers of this blog will think the same.

5. Kurz MJ, Stergiou N. The spanning set indicates that variability during the stance period of running is affected by footwear. Gait Posture. 2003 Apr;17(2):132-5.