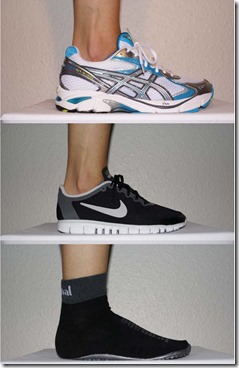 Based upon research published over the past several years, I’ve come to believe the following about the effects of footwear (or lack thereof) on running form:

2. Running in a shoe with no cushioning will simulate some aspects of barefoot running, but will not necessarily simulate the barefoot condition perfectly. This might in part be due to the ability of any type of sole, even one with no cushioning, to reduce friction between the foot and the ground and thus reduce plantar skin abrasion.

A new study was just published on-line in the journal PLOS One that adds additional support to some of what I have written above (full text available here). Here’s the Abstract:

Possible benefits of barefoot running have been widely discussed in recent years. Uncertainty exists about which footwear strategy adequately simulates barefoot running kinematics. The objective of this study was to investigate the effects of athletic footwear with different minimalist strategies on running kinematics. Thirty-five distance runners (22 males, 13 females, 27.9 ± 6.2 years, 179.2 ± 8.4 cm, 73.4 ± 12.1 kg, 24.9 ± 10.9 km.week-1) performed a treadmill protocol at three running velocities (2.22, 2.78 and 3.33 m.s-1) using four footwear conditions: barefoot, uncushioned minimalist shoes, cushioned minimalist shoes, and standard running shoes. 3D kinematic analysis was performed to determine ankle and knee angles at initial foot-ground contact, rate of rear-foot strikes, stride frequency and step length. Ankle angle at foot strike, step length and stride frequency were significantly influenced by footwear conditions (p<0.001) at all running velocities. Posthoc pairwise comparisons showed significant differences (p<0.001) between running barefoot and all shod situations as well as between the uncushioned minimalistic shoe and both cushioned shoe conditions. The rate of rear-foot strikes was lowest during barefoot running (58.6% at 3.33 m.s-1), followed by running with uncushioned minimalist shoes (62.9%), cushioned minimalist (88.6%) and standard shoes (94.3%). Aside from showing the influence of shod conditions on running kinematics, this study helps to elucidate differences between footwear marked as minimalist shoes and their ability to mimic barefoot running adequately. These findings have implications on the use of footwear applied in future research debating the topic of barefoot or minimalist shoe running.

In a nutshell, the study authors recruited 35 runners and had them run trials at 3 speeds (12:04 min/mile, 9:38 min/mile, 8:03 min/mile if I did the math correctly) in each of four different footwear conditions. The footwear conditions (see image at top of post) were barefoot, shoe with no cushion (Leguano), shoe with moderate cushion (Nike Free 3.0), and standard running shoe (Asics 2160). They recorded the following biomechanical variables during each trial: ankle angle at footstrike, knee angle at footstrike, stride frequency, step length, frequency of rear-foot strikes. 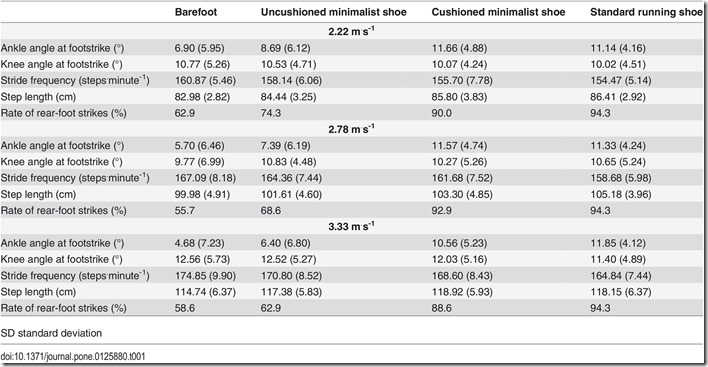 Barefoot running was significantly different from all other footwear conditions (including the shoe with zero cushion) for three of the five variables measured. When barefoot, runners exhibited reduced ankle dorsiflexion at contact (flatter foot strike), increased stride frequency, and reduced step length. Barefoot runners still exhibited a heel strike about 60% of the time, which was similar to the zero-cushion shoe condition. In cushioned shoes, heel striking was observed about 90% of the time.

The cushioned minimal shoe (Nike Free 3.0) differed from the standard shoe (Asics 2160) in that the runners exhibited increased stride rate and reduced step length. Ankle angle and frequency of heel striking did not differ between the two cushioned shoes.

Knee angle at foot strike did not differ between any of the footwear conditions (barefoot included).

The results of this study suggest a gradation of effect of running footwear on form. None of the shoes mimicked the barefoot condition perfectly, even the minimal shoe with no cushion. When barefoot, the runners had the smallest amount of ankle dorsiflexion, a higher cadence, and a shorter stride. The zero cushion shoe yielded similar results to barefoot for foot strike, and had intermediate values for ankle angle. Stride rate decreased incrementally from the zero cushion shoe to the standard shoe, and step length increased incrementally from the zero cushion to the standard shoe.

This study by Bonacci et al. found a similar reduction in stride length and increase in stride rate in the Nike Free relative to a traditionally cushioned shoe, so it does appear that a moderately cushioned shoe may induce some amount of form change in the direction of barefoot running. That being said, retention of a heel striking gait in such shoes can lead to increases in impact forces over traditional footwear.  Although the importance of impact forces to injury risk remains a source of debate, it seems prudent to suggest that care should be taken when migrating toward shoes with moderate cushion.

One of the disadvantages of this study is that it looked at immediate change in runners who were not familiar with running in minimal footwear, so we can’t know for sure if changes from the standard shoe might become more apparent with time and additional adaptation to such shoes.

In my own research I have found that barefoot runners on asphalt are more likely to midfoot or forefoot strike compared to runners in the minimally cushioned Vibram Fivefingers. Combined with results from the study discussed here (and others), these findings support my belief that barefoot running is different from running in any kind of shoe, and that although a zero or minimally cushioned shoe can alter form in the direction of barefoot running, it may never perfectly simulate what happens when you take your shoes off. At the same time, running in a minimal shoe is different than running in a more traditional shoe, but it might take removal of most or all of the cushioning to elicit major changes in running form (at least in the short term).