Gait Retraining and the Treatment of Running Injuries

In my previous post I summarized a slice of what was covered at a three-day course called “New Trends in the Prevention of Running Injuries” that I attended last weekend in West Virginia. In addition to discussing what we do and do not know about the causes of running injuries, the course instructor, Blaise Dubois, a Canadian physiotherapist from Quebec City (Blaise is on the far right in the image below), went in depth into some of his treatment strategies. Blaise feels very strongly that big, bulky modern running shoes are not helpful to runners, and he indicated that he has been prescribing racing flats to his patients for approximately 8 years with good success. In addition to shoe changes, Blaise is also an advocate for natural running form, and he feels that the form that high-heeled, heavily cushioned shoes allows is potentially a cause of injury in some (many?) runners. 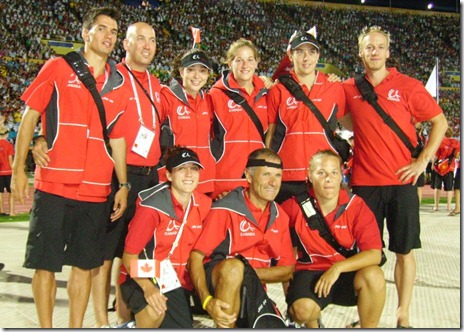 So what exactly is natural running form? Basically, natural running form is the form you would adopt if you regularly ran barefoot. Blaise, however, is a realist, and being from Quebec City where it is ridiculously cold and snowy in winter, he realizes that running barefoot is not going to fly with most of his patients. As such, rather than focusing on minute details of form, or advising patients to focus on their footstrike or other aspects of biomechanics, he instead focuses initially on cadence (check out Blaise’s 10 Golden Rules here). In addition to flatter shoes, he will generally recommend that patients aim for a stride rate of 170-190 steps per minute, and he finds that this will often be enough for a runner to make a noticeable change in form.

If working on cadence alone doesn’t achieve the desired result, he adds in other cues such as telling the patient to “make less noise” when they run, or he tells them to “run softly.” Generally, if you’ are pounding the treadmill or ground when you run, it might not be the best thing for your feet and legs. Blaise also does not seem to obsess too much about footstrike – if cadence and form look overall good, a mild “proprioreceptive” heel strike is not a big deal for him (Jay Dicharry from the UVA Speed lab echoed this – he indicated that footstrike is highly variable and not always perfectly correlated with things like impact force). A ground pounding overstride, on the other hand, is a different story – not all heel strikes are created equal.

Blaise indicated that in his clinical experience, making a shoe change (I love the fact that he prescribes racing flats!), working on increasing cadence, and coaching his patients to run quietly can have often have very positive benefits in terms of helping them overcome chronic injuries. During the course Blaise demonstrated his technique for coaching cadence on several participants – it was pretty amazing to watch. After observing the runner while running at a comfortable pace on a treadmill, he first looks for any obvious biomechanical flaws. Next, he determines their stride rate, and if it is low (say around 150-160), he makes use of a digital metronome to help guide patients to a faster stride rate of around 180 steps/min (you can also download an iPhone app that acts as a stride rate metronome). It feels awkward at first (and I can vouch for this as moving to a midfoot strike felt awkward to me for a long time), but with GRADUAL and PROGRESSIVE practice the new gait is learned and the motor patterns become ingrained (I’ll be writing more about this soon). The hope is that the gait change resolves the repetitive stress issue that caused the injury that landed the patient in Blaise’s clinic.

One often hears the magic number of 180 strides per minute thrown around these days as being the optimal cadence for a runner, and it is the number that Blaise generally recommends. I believe this number can be traced back to famed coach Dr. Jack Daniels observation that elite runners tend to run at a stride rate of 180-200 steps/minute. I’m not sure that we have any conclusive data saying that the 180 number is optimal for every person, but Heiderscheit et al. 2011 showed that running with a faster cadence/higher stride rate (5-10% increase) reduced loading on the knee and hip, allowed for a more level carriage of the center of mass (less vertical oscillation), shortened stride length, and created less braking impulse (read my post on the Heiderscheit paper here). All seem like reasonably positive outcomes if you ask me, and this paper might be a useful guide in that a mere 5% increase in you cadence might be all that is necessary to realize some benefit. It turns out that the 170-190 range would probably be where most people would land if they increased cadence by 5-10%.

To determine where I fall out, on my run today I wore a Wahoo fitness footpod that syncs via an ANT+ sensor (Wahoo Fisica) plugged into my iPhone and gives real-time cadence output. What I found was that my cadence hovered between 182-185 steps per minute for most of the run (pace ranging between 7:30-9:00 min/mile – lots of snow mucked up my ability to run steadily), but on two occasions when I surged to about a 6:30-6:45 min/mile pace, my cadence rose to around 200 steps/min. I wish I had cadence measurements from before I embarked on changing my gait, but I feel quite certain that one of the biggest changes I have made is adopting a shorter, quicker stride, and at this point it is more or less ingrained and feels completely natural to me.

I should point out before I wrap up this post that the approach of gait retraining as a treatment protocol for broken runners is not a new one in the world of physical therapy. Blaise has been doing this for many years, and Matt Fitzgerald actually wrote an article about gait retraining for Runner’s World back in 2004. As Fitzgerald points out in the article, there has always been some amount of debate about whether running form is too ingrained to be changed. However, recent scientific articles (e.g., this one by Crowell and Davis, 2011), suggest that form change via gait retraining is indeed possible, and that it can stick even after a patient leaves the clinic. My personal experience working on my own form would support this – I run very differently now than I did early in 2010. Is it better? I don’t really know, I just know that it’s different.

It’s also worth emphasizing that not everyone needs to pursue form change, or even a change in shoes for that matter. There seemed to be a general consensus among people in the course last weekend that if a runner is running well and has not had injury problems, it’s best to just leave things alone (I clearly didn’t get that message…). In Matt Fitzgerald’s article he quotes Dr. Irene Davis, one of the leading physical therapists working on gait retraining for the treatment of running injuries, who stated “If you try to ‘fix’ your stride when you’re uninjured,” says Davis, “it’s more likely that you’ll cause an injury than prevent one.” Caution is warranted, and consulting a physical therapist who has experience with gait retraining is a good idea if you are injured and apprehensive about doing it on your own. I plan to write a post summarizing a few of Dr. Davis’ recent papers in the coming weeks – some very interesting stuff!

For more on gait retraining, here’s another interesting article by Matt Fitzgerald, this one on Competitor.com.

You just finished reading Gait Retraining and the Treatment of Running Injuries! Consider leaving a comment!