Gait Variability Among Elite Runners at the 2011 Boston Marathon

Shortly after the 2011 Boston Marathon, Steve Magness posted a link on Twitter to a series of videos of the top runners from this year’s race. The videos were all shot at 300fps with the same camera that I have used to shoot my own race videos, and they were posted on YouTube by elvin314. All were shot about 0.5 miles from the finish line, and all provide excellent glimpses of the running form of these elite men and women.

What I’m going to do in this post is provide an analysis of some stride timing data for these runners, with the goal of showing that even though these runners all performed exceptionally well, their gaits differ in some fundamental ways. I do this fully recognizing that this is a tiny sample of footage from the end of a very long race, so what I present here is by no means a definitive analysis of the stride of any of these individuals.

Here are the videos (I downloaded them with Keepvid and went frame by frame to obtain timing data):

Video 1 – Geoffrey Mutai (green singlet) and Moses Mosop (black/red singlet). Both have absolutely beautiful form. Lower leg is near vertical on ground contact for both, and both have a slight forward lean. Mutai is a midfoot striker, whereas Mosop is a forefoot striker. Mosop has a slightly higher arm carry, whereas Mutai drops his below his waistline a few times.

Video 2 – Gebre Gebremariam (green singlet) and Ryan Hall (blue/red singlet). Hall’s form is similar to that of Mutai – low arm carry, slight lean, midfoot strike. Gebremariam appears to have an asymmetry – forefoot landing on left, midfoot on right. He also has a very upright torso and almost seems to be tilting his head backward. Both have a very similar vertical orientation of the lower leg on ground contact.

Video 3 – Caroline Kilel (green singlet, closer to camera), Sharon Cherop (green singlet, farther from camera), and Desiree Davila (yellow/orange singlet). Kilel appears to be a midfoot to slight forefoot striker with a high arm carry and fairly upright posture. Cherop is a midfoot striker with a slight lean and a lower arm carry. Both land with the lower leg vertical at ground contact. Davila is heel striking and appears to be reaching out a bit with the lower leg (slight overstride). She has a moderately low arm carry, and a fairly upright posture.

Video 4 – Kara Goucher. Goucher seems to have a slight heel strike on the left and an even slighter heel strike to a midfoot strike on the right. Lower leg is nearly vertical on ground contact, arms are moderately low, torso is very upright, and head is tilting back like Gebremariam.

So those are my general observations on the stride of each of these runners – feel free to add anything I might have missed by posting a comment. It’s hard to know how much of a factor fatigue might playing here, and whether that might be contributing to some of the observable variations (e.g., the posteriorly tilted head of Goucher and Gebremariam), but it’s clear once again that there is no single gait that defines all of these runners.

Next we’ll take a look at some stride timing data. To do this I used Quicktime to determine the number of frames between various events in the video, then divided the number of frames by 300 to convert into a value in fractions of a second (the video was filmed at 300 frames/sec). The variables I measured were:

1. Length of Stance Phase – time from initial contact of the foot with the ground to toe-off of the same foot.

2. Length of Swing Phase – time from toe off of one foot to next contact of the same foot.

3. Length of aerial phase – time from toe-off of one foot to initial contact of the opposite foot. This represents “flight-time” or the length of time when neither foot is in contact with the ground.

For each runner I calculated these timing measurements starting with the first observable contact of the left foot on each video, and where possible obtained data for both legs and computed the average (only swing phase in Mutai and Hall are based off just one leg). Below are the results (yellow depicts the highest value for each variable for each gender, green the lowest). Units for each value are seconds with the exception of stride rate, which is in steps/minute. The latter was calculated by dividing 60 by the value for step time.

The data are somewhat hard to interpret without doing some formal statistical analysis, but a few interesting things pop out. First, female winner Caroline Kilel is comes out as middle-of-the-road for all of her timing variables when compared to the other women. In other words, she is not doing anything exceptionally fast or slow compared to the other top women. Given that her stride rate here is lower than that of Davila and Goucher, she must have a longer stride length than the others in order to compensate (this assumes that these data are representative of the entire race, which they may not be). Despite being a heel striker, Davila has the shortest stance time and the highest cadence. Goucher has a relatively long stance time, a shorter swing time, and has by far the shortest aerial time of any of these women at this point in the race.

Among the men, Geoffrey Mutai has a faster swing time than the others, and less aerial time (both feet off the ground). He also has the shortest step time, and therefore the highest cadence of any of the men. Mosop, a true forefoot striker, has the shortest stance time and the longest aerial time – he is the only runner here who spends more time in the air than on the ground. Ryan Hall has the longest stance time and a relatively long step time. His cadence is the lowest of any of the runners examined here.

As an easier way to compare these runners, below is a scatterplot showing each runner plotted according to their values for  swing time and stance time. 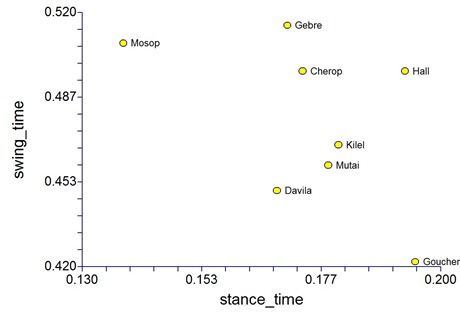 Mosop and Goucher come out at opposite extremes in this plot. Mosop has a long swing phase, short stance phase, whereas Goucher has a long stance, short swing. Interestingly, the male and female winners Kilel and Mutai come out very close to one another in this plot, suggesting that they share some similarity in their gait parameters.

I’m not sure what, if anything, all of this means, but it’s certainly interesting to put some numbers on the gaits of these elite marathoners. I need to digest this a bit before I can really say anything else, but I wanted to post it and see if anyone had any thoughts. If nothing else, it provides more evidence that even elites can vary considerably in their form – one need look no further than Mosop and Mutai. Both came in under world record time (though not record eligible), and they did so using quite different gaits, at least in terms of swing/stance/aerial timing. What’s strange is that if you look at the video of the two of them, their strides look almost to mirror one another. I initially didn’t believe the numbers I had recorded, but I went back and analyzed the video again and came up with the same results. When talking about differences in the hundredths of a second, it’s difficult to notice differences from stride to stride with the naked eye, but I suppose things can add up over the course of a 26.2 mile race….interesting stuff for sure…