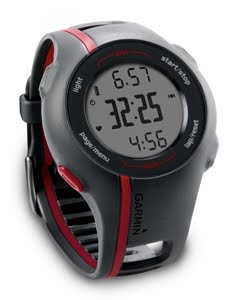 “Forerunner 110 fills the needs of runners of all levels by focusing on simplicity without sacrificing accuracy,” said Dan Bartel, Garmin’s vice president of worldwide sales. “Within seconds of stepping outside, you simply press start and instantly know your distance, pace and time – all without any complicated setup or excessive accessories.”
…
“In addition to displaying time and distance, Forerunner 110 shows pace in one of two ways, averaged out either over the current lap/mile (if auto-lap is enabled) or over the duration of the run. Runners wearing a Garmin heart rate monitor (included in some bundles or available separately) can monitor how hard they’re working while they exercise as Forerunner 110 displays current heart rate data and features heart rate-based calorie computation.“ 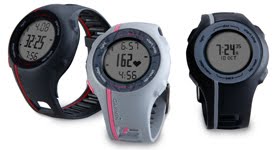 Based on the availble pictures on the Garmin website, it appears that the Forerunner 110 is a smaller profile model, more along the lines of the 405 than the 205/305 or 310XT – this means it’s probably suitable to wear as an everyday watch.  Garmin claims that the re-chargeable battery lasts “up to 8 hours in GPS/training mode and up to three weeks in power-save mode.” The Forerunner 110 syncs to a computer via USB, which is useful for uploading workout data to Garmin Connect or third-party training websites like my personal favorite, dailymile.com (you can read more about Garmin integration on dailymile here).

Although I like the sleek profile of the Forerunner 110, I question the suggested $250.00 pricetag for this supposedly entry-level model ($199.99 without heart rate monitoring) when the perfectly functional Forerunner 305 apparently provides more functionality (including heart rate) for almost $100 less. Granted, people aren’t going to be wearing the bulky Forerunner 305 as an everyday watch, but the need to recharge the 110 means it’s going to have to come off the wrist reasonably frequently anyway. I have no plans of running out to buy a Forerunner 110 (I’m perfectly happy using my 205 until it kicks the bucket), but it will be interesting to hear feedback once it starts to filter out into the market. To read more about the Forerunner 110, check out the official Garmin Forerunner 110 page here. They also have a nice flash-based overview page for the Forerunner 110 here.

Below are links to some of the other Forerunner models on Amazon (they’ve had consistently good prices for these devices).