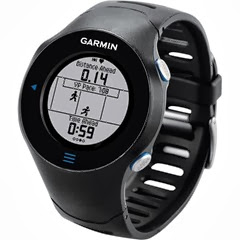 My first GPS watch was the Garmin Forerunner 205, and I used it for several years without a hitch (still works well to this day!). It displayed tons of data, tracked speed and distance nearly flawlessly (except when surrounded by tall trees or buildings), and had great battery life. However, my one big problem with the FR205 was its size – it was like strapping a brick on my wrist, and though I didn’t mind having it on during runs, it was not a watch that I would wear around all day.

I got tired of having to cart around two watches, one for all day wear and another for workouts, so I decided late last year to upgrade to the Garmin 610. I asked Santa to bring one to me for Christmas (meaning my wife, meaning me ordering it and giving it to her to wrap up…). Sure enough, the 610 was under the tree on Xmas morning, and I’ve been using it almost non-stop over the past 10 months.

I have mixed feelings about this watch. I mostly love it, but there are a few things that I find rather frustrating, which I’ll get to below.

Rather than going into exceptional detail about what the watch can do (which would simply involve me regurgitating the feature list on the FR610 info page on the Garmin website), I’ll simply say that as one of Garmin’s top tier watches it does almost everything a runner would need. Lots of data screens, lots of customization possibilities for data fields, easily readable screen, HR monitor and foot pod integration, and so on. I have not found the watch features lacking in any way when it comes to my needs as a runner. (For a crazy detailed review of watch features, you can also check out DC Rainmaker’s FR610 review)

The approach I’ll take to this review is to keep things simple and discuss what I really like about the watch, and what I don’t like. Here goes:

1. Small Size. The Forerunner 610 is much, much smaller than my old FR205. It’s small enough that I can actually use it comfortably as an all day watch without looking like a total running geek with a giant GPS device on my wrist. The 610 was on my wrist 24/7 until recently, when the wristband suddenly broke (more on this below). 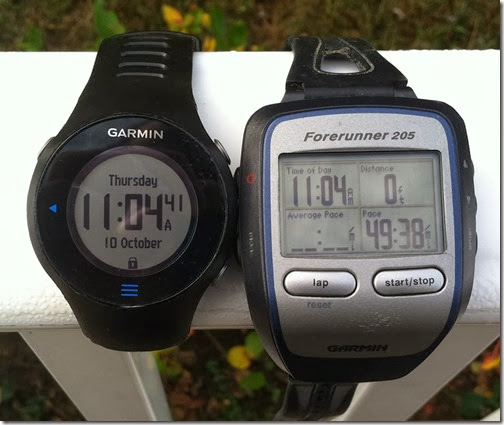 2. Fast Satellite Acquisition. The FR610 acquires satellites very quickly, particularly if you tend to start each run from the same location. It’s faster than my 205, and this means less time standing in the road with my dog barking at me because he’s ready to run and I’m staring at the sky searching for satellites (I don’t know why I do this, it’s not like I can actually see them).

3. Solid Tracking. I have found both real-time pace and distance tracking to be rock-solid. This is criterion number one for me in a GPS watch, and I trust that data coming from the 610 without hesitation (recognizing the inherent limitations of GPS data).

4. Wireless Upload. I love the fact that the watch shoots data to Garmin Connect wirelessly via a USB ANT+ sensor. Since I’m not always great about downloading workouts, this makes my life just tiny bit easier.

5. SportTracks Sync. Garmin watches play nicely with SportTracks, which is the software I use to log all of my runs. I don’t like having to take extra steps as required with Timex watches and some other brands, and this is one of those other small things that makes me happy and saves a few seconds of my time.

6. Screen Customization Options. You can customize up to 4 data screens, each of which can hold up to 4 data fields. Data field options include everything I could want, and this watch gives me the ability to replicate the screens I used for years on the 205. The screen is smaller than that of the 205, so when you use 4 fields the text is a bit small, but I have not had issues reading the data on the run.

All of the above make for a nearly ideal GPS watch that does everything I need it to do and a whole lot more that I didn’t cover here, since I mostly don’t use the other stuff (things like back-to-start navigation, virtual pacer, etc.). However, there are two biggish issues that make the watch fall short of perfection. Neither is a deal-breaker in my opinion, but they are things that should be mentioned. 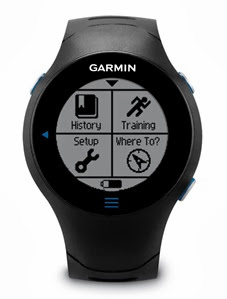 1. The Touch Screen. I’ll take a good set of navigation buttons (like those on the Timex Run Trainer 2.0) over the touch screen of the FR610 any day. The main problem with the touch screen on the 610 is that it is not particularly responsive. I typically have to drag my finger across the screen with a dramatic flourish to get it to do what I want. And, most of the time, this results in me pressing the wrong menu item unless I get the pressure just right. This is probably one of the reasons why I’ve resisted really getting into some of the more advanced features of the watch. I have it set to do what I need, and I avoid navigating the menus as much as possible.

On the plus side, the low sensitivity of the touch screen means that it does not often switch screens accidentally (once in awhile it’ll switch data screens if I brush it against a sweaty shirt, but that’s pretty rare). It also does not experience issues when wet – I ran the Vermont City Marathon in May with the 610 in a pretty steady rain and had no issues. Also no issue showering with the watch on (though I generally don’t use the GPS functions in the shower…). The sequel to the 610 (the soon-to-arrive Garmin Forerunner 620) supposedly has an improved touch screen so hopefully that will remedy the issue.

2. The Wristband. I was standing in the lobby of my office the other day chatting with our office manager and heard a thud. I looked at the ground, and there was my 610 sitting on the floor with the wristband broken off from the body of the watch on one side. I picked it up and it was clear that there was no way it was going to be re-attached – the connecting piece is made of softish plastic and had loosened to the point where the pins no longer secured it. I posted a photo on FB and Twitter and got many, many responses from other 610 owners who had experienced the exact same issue. It appears to be a design flaw with the watch. I proceeded to contact Garmin customer service, and they responded promptly that they would send out a replacement band (still waiting to receive it). 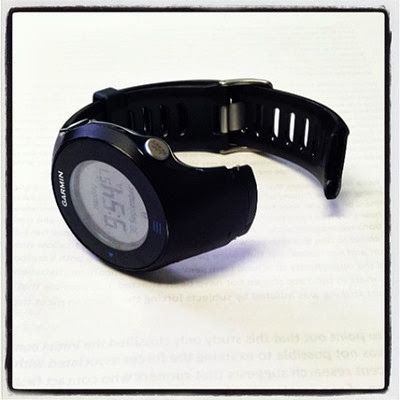 I have heard from several people that they have gone through multiple bands on their 610, so I’m not confident the replacement will be a long-term fix. I was given another tip that Garmin has an optional velcro wristband for the 610 that works much better, but that to get it to work you need to buy a set of 19mm spring pins since the ones that come with the velcro band don’t work too well. What a mess! Anyway, I just ordered the velcro band from Amazon for $18.75, and a set of 19mm spring pins for $4.50. Sucks that I have to pay extra to make the watch work, but better than giving up on a $300+ piece of technology. I will report back on how the new band works (Update 10/16/2013 – I now have the velcro strap and have installed it, you can read about it here).

Velcro Band for the Garmin FR610

So there you have it. The FR610 is a mostly great GPS watch that can be worn all day, but has a few flaws that hold it back from perfection. I can mostly live with the touch screen, but the watch band is an issue that just should not happen for an item at this price point. Should the velcro band solve the problem, I’ll be content, and with the 620 coming I’m guessing we will soon see a price drop on the 610 so buying the watch plus the velcro band will likely cost less than the original MSRP (the price has dropped to $309.99 at Clever Training.

The Garmin Forerunner 610 is currently on sale for $219.99 at my affiliate partner Clever Training.

Clever Training specializes in fitness electronics, and has agreed to provide a 10% off discount to Runblogger readers on most products that they carry – just enter the code RunBlogXJT at checkout.

The Garmin FR610 is also available at Amazon.com.

Purchases support this site and help me to write reviews like this one. Your support is very much appreciated!