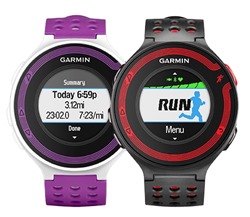 Next to running shoes, running tech gadgets are probably my biggest weakness, and lately I’ve found myself drooling over some of the running tech that is coming down the pipe.

I’ve tried a few products that were “almost there” in terms of being ground-breaking fitness devices – the Motorola MotoACTV is a good example. It was a touch-screen fitness watch and GPS tracker that was the closest thing I have seen to a smartphone fit into a watch-sized package. Unfortunately it suffered from some fatal flaws that made it come up well short of its revolutionary potential (lack of waterproofing of the headphone jack and poor battery life being a huge ones! – as far as I’m aware the MotoACTV has been discontinued).

Just this weekend I got an email from Garmin announcing the Forerunner 220 and 620 fitness watches. I watched the following video and have to say that I’m intrigued.

At first I though these might just be prettier, sleeker, color touch-screen screen versions of the Forerunner 610 (my current everyday GPS watch), but in watching the video they seem to be something a bit more than that. In particular, the ability of the FR620 to measure/estimate certain aspects of running physiology and parameters of the running gait jumped out at me. 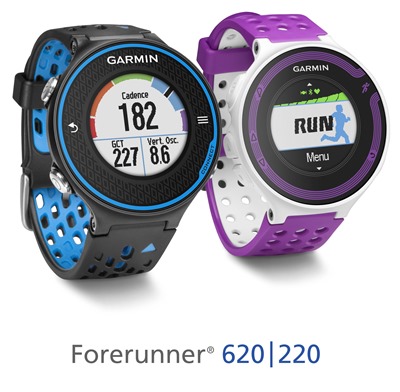 I followed up with the Garmin rep and he indicated that they would be willing to loan me a sample to try out and return, so hopefully I’ll have my hands one a 620 soon to play around with some of these features and report back. If it lives up to expectations, I may be upgrading from my 610 in the not too distant future!

In the meantime, below is a summary of the features of the two watches, with some additional thoughts.

1. Thinner and lighter than the 610. I wear the 610 as my all-day watch, and I like that GPS watches continue to get smaller.

3. Built in accelerometer. The watch itself contains an accelerometer that can estimate speed and distance (the Motorola MotoACTV had this feature). My presumption is that this operates by counting steps in a manner similar to the Fitbit Flex or other wrist-mounted step counters. This could be handy on a treadmill, but probably won’t work if you are pushing a jogging stroller (i.e., when your hands are stationary – the MotoACTV did not count steps when I was pushing my son in his stroller), and accuracy will not be nearly as good as the GPS. But, this feature saves the trouble of having to have a separate foot pod.

4. Bluetooth Enabled. Allows direct upload of workouts through the Garmin Connect Mobile app on a paired smartphone. Also allows for real time tracking of a runner via Livetrack if they are carrying their paired phone with them while they are running. This seems like a pretty cool safety feature. Could also be handy for those crewing runners in an Ultra, though battery life may limit it’s utility in this application.

5. Battery life estimated at 6 weeks in watch-mode, 10 hours with GPS enabled (should be good for distance up to 50K).

The Forerunner 620 has a number of additional features not found on the 220: 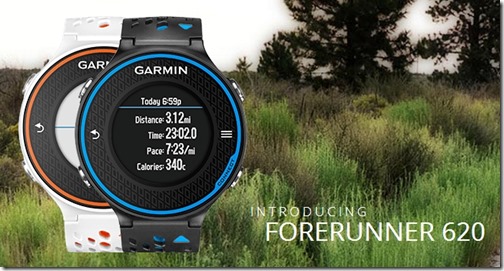 1. Enhanced Touchscreen. The 620 has a touchscreen that Garmin claims can be operated even when wearing running gloves, so sounds like it will be more responsive than the woefully difficult to operate touchscreen on the 610. The 220 is operated via buttons (not a touchscreen).

2. Wifi Upload. The 620 can be synced with Wifi networks to upload workouts to Garmin Connect (thus no need for a USB dongle for wireless uploads like with the 610?). Apparently with each sync the next 7 days of satellite data are loaded to the watch to speed up GPS satellite signal acquisition time.

2. VO2max Calculation. I’m curious about this feature. Garmin claims that they can estimate VO2max using data on speed, heart rate, and heart rate variability. They are using calculations produced by a company called Firstbeat, who has published a number of papers on estimating physiological variables from heart rate data. I’m very interested to try this out given that I have had my VO2max calculated using the traditional laboratory based method (running on a treadmill with a mask on till I feel like I’m about to die). I can put the watch to the test and see just how close it comes to my lab-based measure.

3. HRM-Run Heart Rate Monitor. The heart rate monitor that can be purchased with the FR620 has an accelerometer built-in, and can also measure heart rate variability. Garmin claims that it can determine how well you are recovered for your workouts by using the HRM-Run – I presume this is based again on algorithms from Firstbeat, most likely heart rate variability. I haven’t read any of the literature on HR variability as an indicator of training stress, but it seems to be gaining popularity.

4. Running Gait Measurements. The accelerometer in the FR620’s HRM-Run monitor can apparently calculate/estimate ground contact time and vertical oscillation (see readout on watch below). This is perhaps the thing I’m most excited to try out. I’m curious how accurate it is, but if it works reasonably well it could be a great tool for gait training. 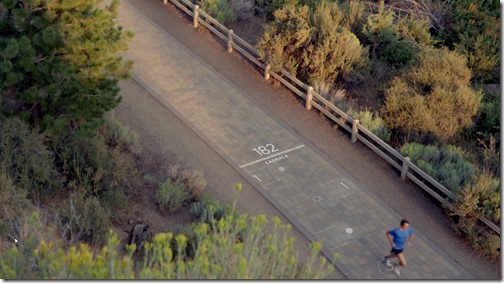 I’m hoping to have a loaner in the next few weeks, and will try to get some initial thoughts posted as soon as I have it in hand.

Both the Garmin Forerunner 620 and 220 are available for purchase at my affiliate partner, Clever Training. Clever Training offers Runblogger readers 10% off selected purchases with the code RunBlogXJT.

Below is the feature comparison chart for the two watches: 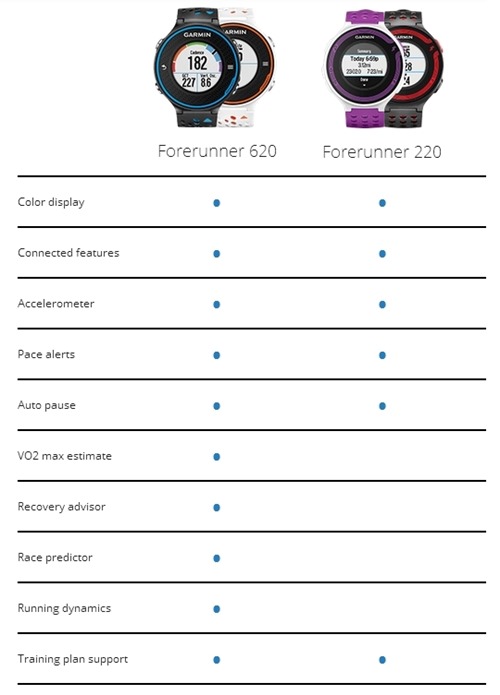