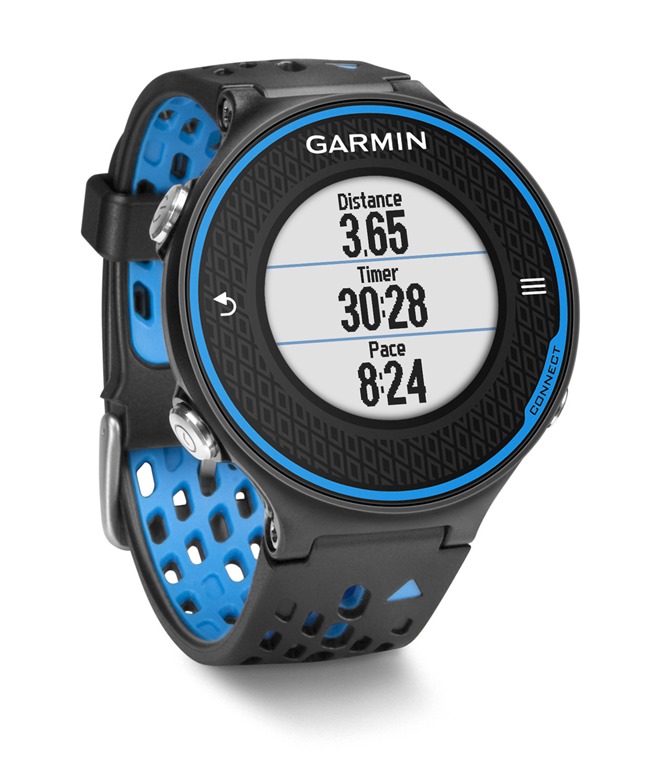 I’ve been working on a long overdue review of the Garmin Forerunner 620 – it’s been a tricky GPS watch to review because it does so much, but also because I’ve had some issues with it. One of my original reasons for buying the 620 was that I was interested in the ability to record data on running dynamics (i.e., biomechanical data) via the paired HRM-Run monitor. As part of the review I had included a section where I shared some running dynamics info from a few of my runs, but as a result the review was becoming incredibly long. As such, I thought I’d break out the running dynamics into a separate post here.

What I’m going to do is share data from a few runs that revealed some interesting patterns to give an idea of what you can learn from the device. I still find the data more a curiosity than something I would use to make changes to my form, but it is interesting to play with the information!

First, let’s take some data from a near-PR 5K I ran back in April – below you’ll see the run summary info and GPS track, as well as graphs for cadence, vertical oscillation, and ground contact time (GCT) all estimated by the HRM-Monitor: 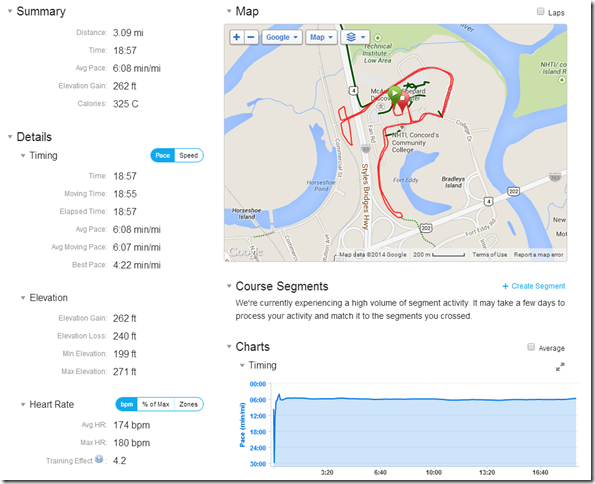 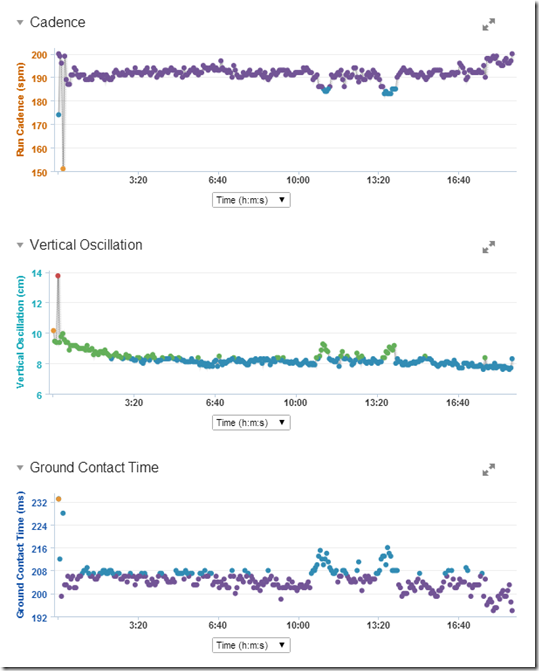 For frame of reference, here’s how Garmin breaks down running dynamics across a range of runners ((note: I’m not sure exactly how Garmin determined these groupings):

Looks like my cadence and ground contact time during the race were on the high end (mostly purple – >95 percentile), whereas vertical oscillation was more middle of the road. This suggests to me that I have a short, quick stride with a moderate amount of up and down movement (assuming the HRM-monitor provides an accurate measure of vertical oscillation).

What’s kind of cool in the above graphs is that right after the 10:00 mark we went up, over and down an overpass, then returned over that same overpass just after 13:20. You can see how my cadence, vertical oscillation, and GCT changed going up and down the hill. You can also see that my cadence trended upward, and oscillation trended downward over the course of the race (presumably in part as I sped up at the end).

For an even more interesting view of data from the same race, I pulled the following graph off of the Connect Stats app, which pulls data from Garmin Connect and lets you look at it in different ways:

In the above graph you can see how my cadence changed from the beginning (blue dots) to the end of the race (orange/brown dots). You can also see on the right are two downward loops that probably represent the overpass mentioned above. What I find particularly interesting is that at the end of the race my cadence shot up way higher than it was at the same pace earlier in the race – wondering if this is a way of compensating for fatigue (it was a pretty flat course except for the one overpass so terrain doesn’t seem to explain this)?

You can see a similar pattern with the vertical oscillation data in the graph below – greater oscillation early in the race, less toward the end, even at similar paces run earlier on – perhaps I had to compensate for reduced air time by increasing my turnover? 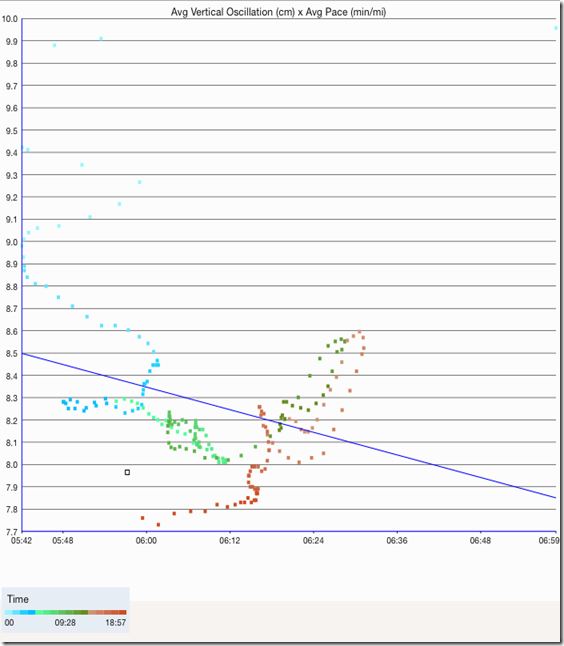 Here’s one more graph from a different run (also in the Spring) that I found interesting: 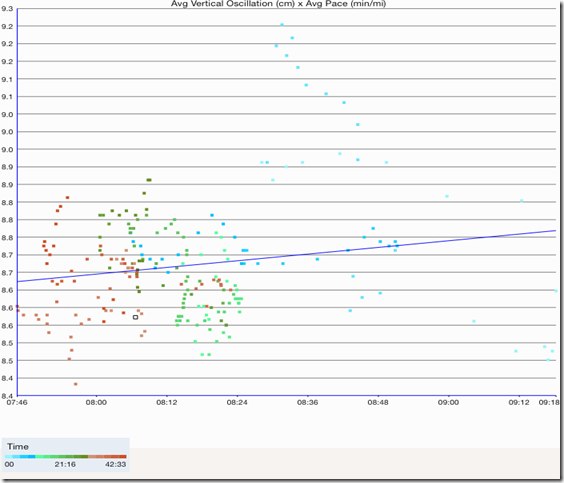 This one was from an easy training run, and I was puzzled by the higher vertical oscillation at the beginning of the run (light blue dots). After a bit of thinking over a few runs I realized that my left knee had been bothering me at the time. When it does I often accentuate a forefoot strike and stiffen my leg on that side at the beginning of runs. However, once it warms up I settle into my more typical stride mechanics. My guess is that the early numbers represent modified form until I warmed up. Pretty cool, and suggests that you can get some interesting data from a device like this. I’m still not sure how accurate the numbers are, but I do think they are at least representative of general patterns, and there seem to be plausible explanations for some of the unusual patterns observed.

I’m curious now to try out the HRM-Run monitor for a comparison between a few different shoes – perhaps Hokas versus something more minimal. May just have to do some experimenting!

Have any of you played with the running dynamics data on the Forerunner 620. Any interesting patterns observed?