Now that the weather has been getting colder and I’ve been running regularly in the NH winter, I have received a number of questions about how cold is too cold for me to get a run in. I have yet to reach a lower limit so far this year – the day I filmed my first videocast was my coldest so far (5-10 degrees F with wind chill). For me, cold is mainly only a problem for my head and hands – the rest of my body stays fairly warm while I run as long as I dress appropriately.  In this post I’ll talk about gloves, and in a future post I’ll focus on headgear. 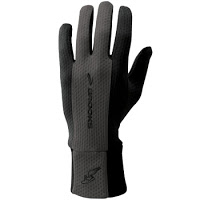 The Pulse Lite gloves are made of a lightweight, mesh-like material, and are good for runs in temperatures over about 30 degrees Fahrenheit.  I had to order a size larger than that suggested by following the measurement guidelines (I wear a large), but they are form-fitting and very comfortable.  I believe the pair that I own is last year’s model, and the newer edition apparently sports a flip-back thumb for easier mp3 player control. I initially thought this would be an insginificant feature, but the presence of the flip-thumb on the HVAC (see below) has come in very handy on several occasions already.  If you’re looking for a nice, lightweight glove for running in cool, but not frigid weather, the Pulse Lite is a good choice. It sells for $18.00 on the Brooks website. 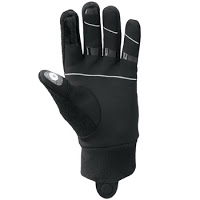 It’s hard to rave about something as seemingly simple as a pair of gloves, but I love the Brooks HVAC’s. They are made of a heavier material than the Pulse Lite, yet are also form fitting and very comfortable (I also ordered a size up – large – in these).  The HVAC gloves are great for colder runs, and have worked great for me down to below 10 degrees Fahrenheit (haven’t had weather colder than that yet this year – usually comes in January).  They have a nice terrycloth strip along the index finger to take care of the inevitable gushing from the nose that occurs on frigid runs, and there’s a handy little pouch on the back that will fit a key or a few dollar bills (I use this a lot when running at work).  The HVAC also has a flip-back thumb that is really useful if you run with music – it allows me to mess with the click-wheel on my Nano without having to take of the glove – very handy when it’s really cold outside.  The HVAC can be had for $28.95 on at Running Warehouse (you can get 15% off of this by clicking on the Running Warehouse link in the right sidebar of this blog).

In summary, both of these gloves work well for winter running.  If you live in the southern states where the weather rarely dips below freezing, the Pulse Lite would probably be fine, but if, like me, you live in a more northern climate, the HVAC will come in handy on those freezing winter days when you still want to get your run in.  Personally, I’m happy to have both.

For an addtitional overview of Brooks gloves, check out this glove guide on the Brooks Blog.  They also make a glove called the Vapor-Dry2 which is kind of intermediate between the two I’ve reviewed here.  I don’t have that model, which is why I haven’t commented on it here.