I receive emails frequently requesting that I review various products. I’ve come to realize that this is both a blessing and a curse. Yes, it’s nice to be able to test out gear, but the downside is that it takes time to test and write reviews, and time lately is something that I have precious little of (family and job naturally come first, and both are demanding a lot of me right now). As such, I lately have been turning down a lot of review opportunities, partly because I simply lack the time to as thorough a job as I would like, and partly because I see this blog heading in new directions that require me to be a bit more focused. Thus, going forward I’m going to be limiting my product reviews a bit to things that are of most interest to me and readers of this blog (I’m talking about shoes of course and some accessory gear), and less toward the little things like those I will be reviewing in this post.

My accumulation of overdue reviews has once again reached a critical mass, so I figured it was time for another compilation post of products that don’t really need much in the way of commentary. In the coming days I will be adding reviews of a few other things to clear my backlog and ease my stress load (which is quite large right now!). After that, I will be getting back to some more sciency stuff, as that is where my interests are taking me these days. Without further adieu, here are three products that I have tried out over the past several months:

I used to be a big fan of plastic Nalgene water bottles, until the BPA scare caused me to switch over mostly to steel bottles (e.g., Klean Canteen) to avoid any risk that might be associated with the chemical. Nalgene contacted me a few months back about trying some of their new BPA-free models, and they sent me samples of two types: the On-The-Fly bottle and the MultiDrink bottle (both pictured below). Neither of these are bottles that I would carry with me on the run, but I generally have a bottle of water in tow at all times, and both of these are part of my regular rotation along with my Klean Canteens. There’s not a whole lot to say about a water bottle – neither of these leak, they look nice, and they have no BPA in them. Of the two, I prefer the Multi-Drink, mainly because the flip-out straw spout makes it easy to drink without spilling on myself (I have a habit of doing this), and it is easy to hand to my kids to drink from in the car without sloshing water all over the place. Both bottles get a thumbs up from me, though I still prefer steel when possible since I am always a bit wary of what goes into the making of plastics.

Here is some additional information about Nalgene’s new bottles: 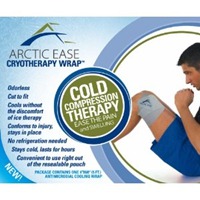 Shortly before I ran my second Fall marathon last year, a company called Arctic Ease contacted me about trying a cryotherapy product that they make. Since I knew I would be running a hard race on already tired legs, I figured “what the heck,” so I agreed to having them send me a sample (disclosure – this was a free product provided by the manufacturer).

The Arctic Ease cryotherapy wrap is essentially like an Ace bandage coated in a clear, gelatinous substance. I inquired about the specific chemical make-up of the gel since it tends to get all over the place and I didn’t want my dog to eat it, but they were unwilling to provide specifics beyond saying that it was biodegradable and is similar in makeup to what goes into toothpaste – I’m guessing some kind of menthol type ingredient. Anyway, I’ll be honest and say that I have only used the wraps a few times, mainly because they are a bit messy (the gel crumbles all over), but also because I simply haven’t needed cryotherapy all that often. The wrap feels good when applied, and it sticks well both to itself and the skin well so it is possible to apply a decent amount of compression to the area that you wrap. The cooling is very mild as advertised, kind of like putting an bandage soaked with Vicks Vapo-rub on your skin. Another positive is that they are re-usable – you simply wrap it back up and put it in the re-sealable package with a bit of water to keep it hydrated. I don’t know that I would run out and buy a bunch of these, or that they provide any benefit beyond just using ice (I don’t even use ice all that often), but they do feel good on those acute occasions when you might need them. For more information, visit the Arctic Ease website. 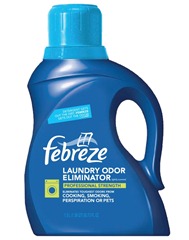 Chalk this one up as a product that I agreed to try out simply to solve a specific problem (disclosure – Febreze sent me a coupon for a free bottle). If you run in gear made from tech fabric, you are probably aware that it sometimes can hold a stink. I had a number of tech shirts that were left a bit to long before washing (not good!), and had essentially been relegated to being unusable. Not being one to throw gear away (much to my wife’s chagrin!), I figured I’d give the Febreze a try as a last resort to try to de-stink them. After the first wash with the Febreze product, the smell was still noticeable, and I was a bit disappointed. I decided to up the ante and increase the amount of Febreze added for one more try. It worked pretty well – there was still a very mild stink, but it wasn’t terribly noticeable, and the clothes were at least wearable once more. The product is a bit pricy at $12 plus per bottle, so it’s not something I would keep on hand at all times, but it did save 4-5 shirts from the trash, so I’ll give it credit at least for that. For more information, visit the Febreze Laundry Odor Eliminator website.