This winter has been very hard on my running. From late December to just this past week, the sidewalks and roadsides near my house in NH have been largely covered by ice and crusty snow, and running has been difficult to say the least. Even worse, the nasty conditions underfoot have made it almost impossible to run at night, which is the time that often works best for me given my rather hectic daytime obligations. The combination of poor conditions, returning to a busy work schedule after a much needed sabbatical, working on a big writing project, and chasing three kids around, one of whom is a toddler just about to walk, have sucked away my free time and pretty much killed my mileage of late. I’m OK with this as those other things are far more important right now, but for an avid runner, not being able to run can be frustrating, and there were a few points where I was really starting to doubt my ability to take part in my two planned events for this Spring – the HAT Run 50K and the Boston Marathon.

Quite honestly, I had decided a few months back to pull out of the HAT Run 50K. I went so far as to inform some friends who were also planning on running HAT that I wasn’t going to be there – it was hard, especially because one of the main reasons I wanted to run HAT was to meet these folks who I have become close with through dailymile.com. The reality was that I didn’t think my mileage was sufficient to safely complete a 50K, and I was worried that if I got hurt attempting it I might jeopardize my chances of running Boston. I’d essentially been doing maintenance mileage (15-25/week) since completing two marathons last Fall, and had no idea what kind of shape I was in. I wasn’t sure how much of my fitness from last Fall (possibly the best of my life) had been retained over the course of this nasty northern New England winter.

On the plus side, running on crusty, uneven ice has kept my legs strong due to the irregular surface (basically it’s like trail running), and a lot of my miles have been done in pretty minimal shoes (e.g., Merrell Trail Glove). My thinking was that if I wasn’t going to run a lot of miles, I might as well focus on keeping my legs as strong as possible. Over the past month or so I did a fairly rapid ramp up of my long runs, and I was actually pretty surprised at how well they were going. Several weeks ago I got in a solid 15-miler at right around 8:00 pace and decided that maybe the 50K would be doable – I decided to back out of my plans to back out. I still haven’t run over 30 miles in a week in quite some time, but my burgeoning confidence that I’m not totally out of shape was further bolstered this last Sunday by a 20 mile run in the New Balance Minimus Trail (on dry roads, finally!) – the run went extremely well, and my legs are feeling quite good only two days later. Seems my shoe surgery on the Minimus Trail worked! This was the longest I have ever run in a shoe as minimal as the Minimus Trail, and it gave me the confidence to finally go ahead and make plane and hotel reservations – I will be in Havre de Grace, Maryland this Saturday running the HAT 50K with my friends Thomas, Steve, Andy, Jenny, Jeanne, Brodie and many others. What’s more, I’ll get the chance to finally meet Christopher McDougall, who will also be running the race (in Barefoot Ted’s Luna Huaraches, or so he tells me!). As for my big footwear decision, I’ll probably start the race in the Minimus Trail, and bring along the New Balance MT101 (a positive review is pending) in case I need to switch up at some point (don’t think I could handle 31 miles in the Merrell Trail Glove yet).

My plan is for the HAT Run to be my final big long run leading up to Boston, though I may try to squeeze in another 18 or so miler prior to toeing the line in Hopkinton. I have no idea what to expect from HAT, and my only goals are to go easy, have fun, and avoid hurting myself (or drowning in the river as predicted by my buddy Andy with his Photoshop job below). I’m sure I’ll write more about Boston in the coming weeks, so I’ll leave that be for now, but my plans for the remainder of the year are to take a marathon break for a bit. The time required to get in the necessary training mileage is too much for where I am in life right now, and I have a strong desire to see what I can accomplish at shorter distances – I may focus on 5k’s through the summer and go back to Smuttynose and run the Half-Marathon this Fall. Nothing certain, but I’m feeling the need for some speed 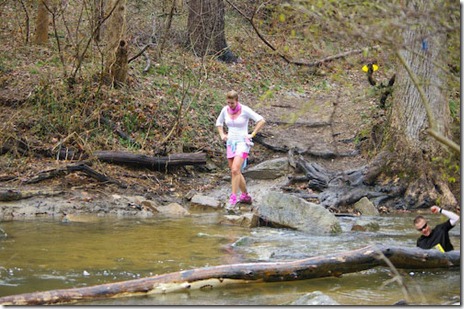