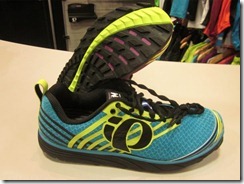 Quick post to alert you to a fantastic article by Bryon Powell of iRunFar. Bryon attended the Outdoor Retailer Show and wrote up his thoughts (with photos!) on a wide range of trail shoes set to be released in the coming months (and a few road shoes – including the New Balance Minimus Hi-Rez).

In addition to highlighting a bunch of new models (including some very cool shoes from Pearl Izumi – see PI Trail N1 photo above by Bryon Powell), Bryon also touches on some updates to a few shoes that I have worn in the past six months. Most significant among these are a new, grippier outsole on the Brooks Pure Grit (hopefully will reduce wet-ground slippage), and a 1mm reduction in lateral sole thickness on the New Balance MT110.

I get asked frequently about the New Balance MT110, and yes, I have run in the shoe a number of times. However, I definitely feel a rather distinct thickening of the lateral sole in my pair, and it actually causes my feet to slant inward just standing in them on hard ground. After developing a mild case of posterior tibial tendonitis after a 10 mile trail run in the MT110’s, I shelved them and have not run in them since. Hopefully this will fix a big problem in what is an otherwise nice shoe.