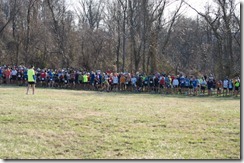 At 9:00 AM last Saturday morning I stood at the starting line of the Hat Run 50K in a grassy field in Susquehanna Sate Park, MD (photo at left by Jeff Hinte, HAT Race Director). I was contemplating the fact that I was about to run 31 miles on hilly trails that would take me over some 9,800 feet of elevation gain (see elevation profile below), and I knew that pain was coming. Some might think that doing such a thing is crazy, but at that moment, I couldn’t have been in a more perfect place. I was completely relaxed – the butterflies and pre-race jitters that normally hit me just before the starting gun fires were nowhere to be found. I relished the challenge that lay ahead.

Over the next 5 hours, 52 minutes, and 48 seconds I ran through fields, along gravel roads and forest trails, through streams, and up and down hills. Endless hills. I ran fast, I ran slow, I walked, I hobbled, and at one point I even sat down and took off my shoes (they were filled with sand). I had moments where I felt like I was flying, and I had moments where seemingly all of the muscles between my knees and my hips were screaming at me in unison. At one point my quads, groin, and hamstrings were on the verge of cramping all at the same time, so I stood in a cold stream until the pain subsided. I ate boiled potatoes dipped in a bowl of salt (pure heaven!). I ate peanut M&M’s on the run and had to use my hydration pack to get the rainbow of color off my hands after I scarfed them down. I ate multiple bananas. In the final mile much of this food almost came back up, but I fought the waves of nausea and held it down. And through it all, I had fun. Scratch that, I had an absolute blast! 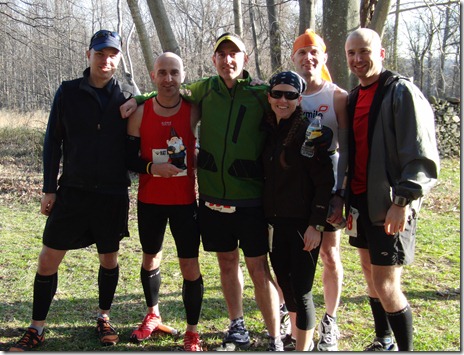 The details of the race are not so much the important part of the experience. What made this day so special was the people. I had so much fun because I was able to share the experience of running the HAT Run 50K with good friends, none of whom I had ever met before in person, but several of whom I feel like I have known my whole life. The reason I had decided to come to Maryland in the first place was to meet up with friends from the dailymile social training network (see photo above). They had done the HAT the previous year, and the stories they’d told of the experience in the Maryland woods had become legendary. A bigger group was in attendance this time around, and it was great to finally meet my friends Andy (thanks for the Panera breakfast!), Steve, Ally, Thomas, Brodie, Jenny, Jeanne, Smitty, as well as several others. I saw many of them out on the course, and we hung out both before and after the race. 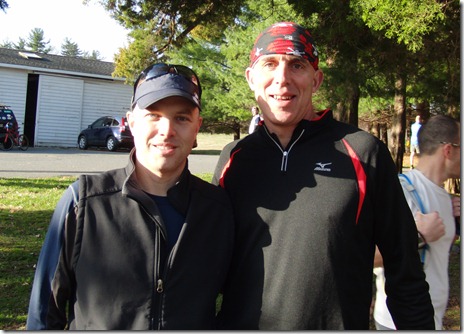 Me and Christopher McDougall

I also was looking forward to meeting up with Chris McDougall (see photo above). We’ve exchanged emails off and on for awhile, and as I was mulling doing HAT last Fall I got an email from him saying “If you’re in, I’m in.” Hard to turn down an offer like that! Chris was gracious enough to put me up at his house the evening after the race, and I discovered that we have more in common than our fascination with running form and footwear (or lack thereof). Let’s just say it’s comforting to know that I’m not the only father who thinks the Barbie Princess and the Pauper soundtrack is a musical masterpiece worthy of being belted out when alone in the car. Chris’ family was eminently hospitable, and I owe his wife a huge debt of gratitude for allowing me to fill his house with running talk for a day.

My honest plan for the race was that I really had no plan. After the starting gun went off I settled into a comfortable pace alongside Chris and a few others. Being an Ultra newbie I followed everyone else’s lead and walked the uphills and ran the flats and downs. The pace was more than manageable, and I felt like I could go all day. I had a nice time chatting with Chris about running, shoes, etc., and we had some nice conversations with surrounding runners. I remember the topic of hashing in Laos coming up at one point – funny the topics that come up when on the run. 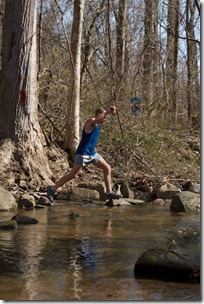 Around the five mile mark (guessing) there was a stream crossing (photo at right by Jeff Hinte) and I intended to rock hop to the other side so I wouldn’t soak my shoes (I had decided to go with the New Balance Minimus Trail). I wound up slipping on a wet rock and mashed my opposite forefoot onto another rock in an attempt to prevent myself from falling into the water. The pain was instant and piercing, and my immediate thought was that I had broken something – not sure if a shoe with a rock plate would have helped or not, but the Minimus Trails were marvelous aside from this one moment. I kept running, and eventually the pain subsided to a dull ache. A few miles later I kicked a root and collided with the ground. It’s funny how trail spills seem to occur in slow motion, and I could feel my legs giving way as my body slowly plunged to the earth. I managed to bruise my hand badly by using it to brace my fall, but thankfully my legs escaped unscathed. I managed to stay on my feet for the rest of the race. 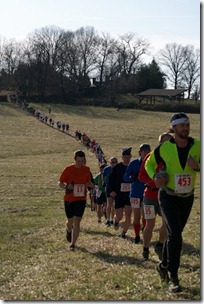 One of the things about trail running on single track that is different than road racing is that passing can be a challenge. On trails you often run single file (see photo at left by Jeff Hinte), so it’s easy to get separated from people you are running with as you try to maintain a comfortable pace. Around mile 9-10 I got ahead of Chris a bit as we mingled with a bigger crowd of runners, and at one point I looked back and I could no longer see him. The crowd in front of me was sparse at that point so I decided to keep running at the pace that felt most natural at the time. We entered a section on crushed rock road for several miles, and I was feeling really good so I turned on the jets for a bit (ran a 7:00 mile here, which in retrospect probably was a mistake). I passed my friends Thomas and Jenny and said a quick hello, then continued on through the aid station, grabbing a snack as I passed through. 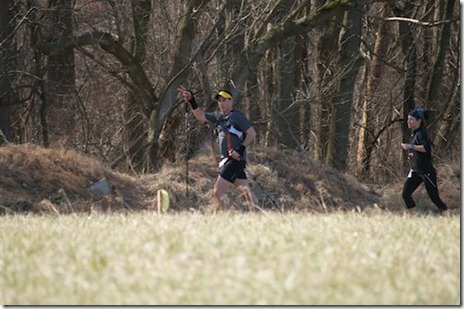 Thomas and Jenny on the trail – photo by Jeff Hinte

From about mile 13 onward I pretty much ran solo. This worked out well for me since I tend to turn inward into my own head as I start to focus on a race once the initial excitement wears down. I passed a lot of people over the next 5 or so miles, and made it through the first big loop at mile 18 feeling phenomenal. As I started the second loop I felt like flying, and I started racing down the downhills a bit too fast. This set up my inevitable crash around mile 25, when my quads started to tell me that they had had enough. I stopped to stretch them out, only to find that the moment I flexed my knee my hamstrings rebelled and started to knot up in cramps. There would be no quad stretching for me. From that point on it was a constant battle to prevent my quads, groin, and hamstrings from locking up completely, but I fought through with a bit of help from a cold leg soak in a stream.

Every hill seemed twice as steep on the second loop, and the roads that I cruised down on loop one didn’t provide nearly the same degree of respite on loop two. Around mile 29.5 I saw my friend Andy up ahead – he was hard to miss with his bright orange du-rag covering his bald head. I set my crosshairs on the du-rag and managed to catch up with him. It was clear that he was hurting, and I wasn’t doing so well myself, so we marched the final mile in with only very short spurts of running. As we approached the finish line we saw Steve and Ally shooting pictures (Steve is an amazing runner and had finished in third place!), which gave us a much needed lift, and we ran the final stretch across a field to the finish line together, crossing in 5:52:48. 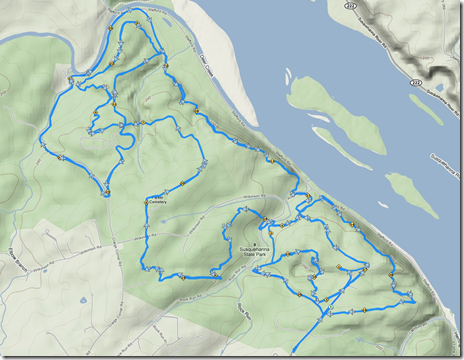 I was mentally lucid for the entire race, but once I stopped running I started to fall apart a bit. I needed food, and I needed it badly. I remember several people trying to talk with me as I trudged into the aid station, but I have a hard time recalling much from those few minutes. After a hot dog and several cups of Coke I began to bounce back, and the celebration ensued. I hung out and had a beer with the dailymile crew, shared some war stories from the race, and had an all around great time – just an amazingly fun and genuinely caring group of people. I caught up with Chris when he crossed the line – he’d also had cramping issues in his thigh adductors (seemed to be a theme for the day from many people), but he finished happy too. The common sentiment was that the race was tough, but well worth the effort. There are truly few better ways to spend a sunny spring day than running trails with friends.

Several people asked me afterward if I would do another Ultra. I kept thinking to myself as I ran that I couldn’t imagine how people manage to run 50 and 100 mile races – I had nothing left after 31. I’ve learned never to say never, and I’ve definitely been bitten by the Ultra bug. Ultras are a totally different beast than big road marathons – much more laid back and they test you in different ways. For me, HAT wasn’t about speed so much as it was about enjoying the moment and ensuring that I had enough left in the tank to finish. I flew when I felt like it, walked when I needed to, and never felt guilty about it. My pace ranged from sub-7:00/mile on a few downhill road sections to near 20:00 on 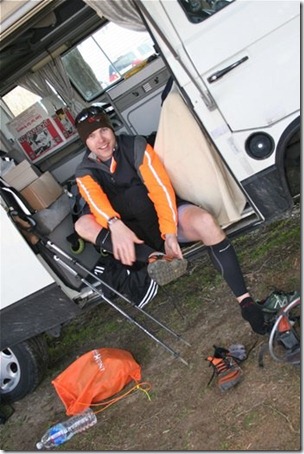 some of the steeper uphills, and I never ran a steady pace for any length of time. That, however, is what made it fun – the terrain and strategy were constantly changing, and the repetitive nature of a road race was nowhere to be found.

Along with the Smuttynose Marathon last Fall, the HAT Run 50K ranks right up there as one of my most cherished running experiences. Though they were very different races, one a road marathon and the other a trail Ultra, they were special because I was able to struggle through and celebrate with friends. Running is a joy and a gift, and it is a gift that is at its best when shared. I love solitary moments on the run, but there’s nothing quite like crossing a finish line and knowing you can share the experience with others. Above is a happy runner, and one who has a feeling he will be doing this again…