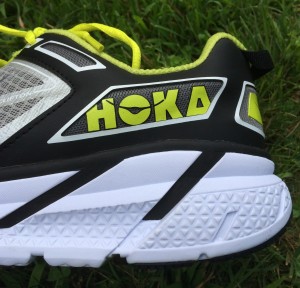 One of the great things about the running shoe market right now is that there is a huge diversity of footwear options available. From minimal to maximal, and everything in between, there is most likely something out there that will meet your personal preferences/needs.

As a more minimally oriented runner, I’ve held off for a long time on trying out a Hoka running shoe. However, I feel it is important to keep an open mind, and I have readers who span the spectrum of footwear preferences. As such, when offered the chance to try out the Hoka Clifton, I decided to give them a go (Disclosure: the shoes reviewed here were media samples provided free of charge by Hoka). The experience of running in them has actually been quite interesting, and has caused me to do a lot of thinking.

Last week I wrote a post sharing 5 observations about running in the Cliftons that spurred quite a bit of discussion in the comments. The experience among commenters seemed to be quite mixed. Many love the shoes, others seemed to feel that they had to work harder when running in them. I want to emphasize this because although I fall into the latter group, there’s a lot to like about this shoe, and if you prefer a soft, cushy ride, they would be a great option to try. It’s important to remember that my reviews only reflect my personal experience with a shoe, and not how they might work for you. I’ll do my best to describe the shoes so that you can make a decision for yourself.

The Hoka Clifton is currently the lightest shoe in the Hoka lineup at 7.8oz in men’s size 9 (per Running Warehouse). It has a stack height of 29mm heel, 23mm forefoot, and the CMEVA midsole is quite soft, particularly under the midfoot and heel. Along with the Skechers GoRun Ultra, the Clifton is probably one of the softest shoes I have run in.

I’m going to start by talking about the ride, since this is where most of my personal problems with the Clifton arose. My first run in the Clifton was a seven miler, and my immediate reaction was that I felt I was working much harder than I should have been. Over the next several runs this feeling persisted, particularly when running on a uniform surface (road/sidewalk). For some reason they actually felt better to me on trails, not sure why, maybe the greater variability of the surface underfoot. But on almost every run on the road I finished feeling like I was expending more energy than necessary. I’m puzzled by this as I don’t think the total stack height is my issue – I enjoyed running in the Nike Pegasus 31 which has a fairly similar stack (29mm heel, 19mm forefoot), and last night I went for a first run in the Brooks Ghost 7 (28mm heel, 17mm forefoot) and they felt really good. My suspicion is that the softness of the Clifton sole combined with the stack height is my issue. The combo doesn’t seem to be a good match for my stride, and I’d bet that this has to do with concepts like muscle tuning and leg stiffness adaptations (this probably goes beyond the scope of this review, but if interested you can read more about muscle tuning and leg stiffness here).

I want to again emphasize that this is my experience, and that I know a lot of other people who love running in this shoe and don’t feel the same way. It really seems to be a highly individual response as might be expected for any shoe given to a range of people who vary in anatomy, running form, physiology, etc. So don’t let this turn you off from trying the Clifton if you are intrigued by it – it might just be a great ride on your feet.

One of the interesting things about the Clifton ride is that because of the rockered sole, I felt like it encouraged me to get more up on my midfoot than other shoes do. In fact, if you look at the wear pattern  (see photo below) you will see almost no abrasion on the heel, and quite a bit on the exposed EVA near the midfoot. And when I pick up the pace this effect seems even more pronounced – the ride felt more responsive as I pushed faster than my easy pace. 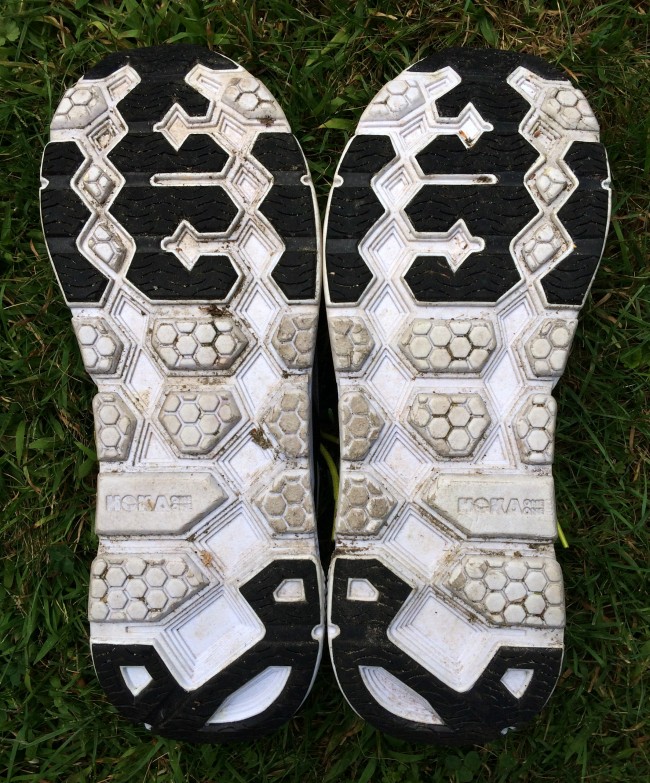 In terms of outsole coverage, there is rubber under the high-wear areas of the heel and forefoot, but none under the midfoot. As mentioned above, I’m seeing most of my wear on the exposed EVA midsole foam along the outer margin of the sole near the midfoot. 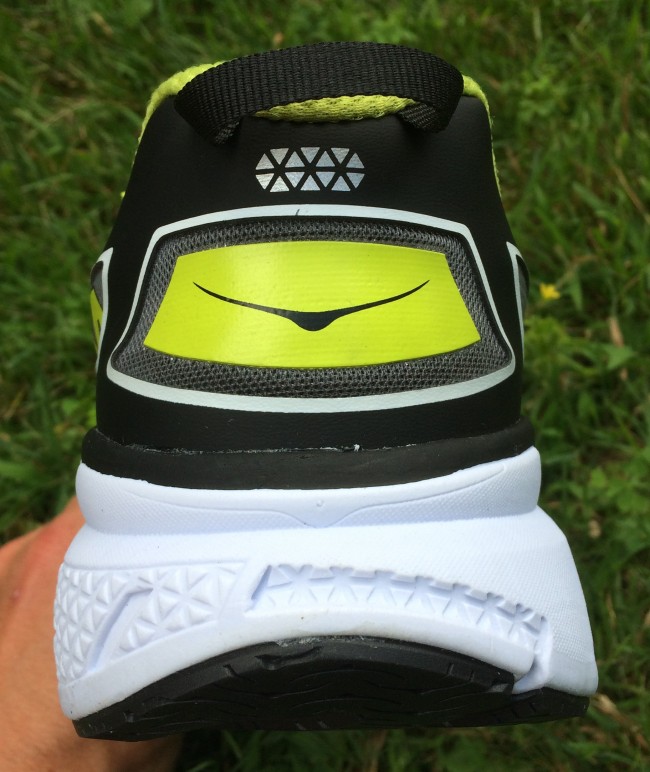 I’ve tried on a number of Hoka shoes in the past, and the fit for most never felt quite right on me. The Clifton, on the other hand, fits my foot almost perfectly. I did go a half size up, but this may not have been necessary as I have just a bit more than a thumb’s width between the tip of my big toe and the front of the shoe. I find the forefoot to be spacious enough to allow my toes freedom of movement (up and down and side to side), and the midfoot fits snugly.

I have heard some complaints about the heel lock-down in the Clifton, but this has not been an issue for me. I have a fairly high-volume foot so that may have something to do with it, and snugging the laces up top seems to keep my heel locked just fine. The insole is quite thin, and I’m wondering if those with heel lock issues might benefit from swapping in a thicker insole. Overall, I’ve found the Clifton to be a very comfortable shoe, nothing negative to say in this area.

The Clifton has a minimally constructed upper composed of a breathable mesh with welded overlays from midfoot forward. The area around the heel is padded and more structured. The tongue is extremely thin, and on some occasions it tends to fold under while sliding the shoe on, requiring me to use my finger to flatten it back out. Not a big deal though.

One concern I have about the upper is that some of the welded overlays on the inner side of the forefoot seem to be separating from the underlying mesh slightly. Anyone else noticed this? Probably won’t effect function much, I suspect it’s mostly a cosmetic defect. 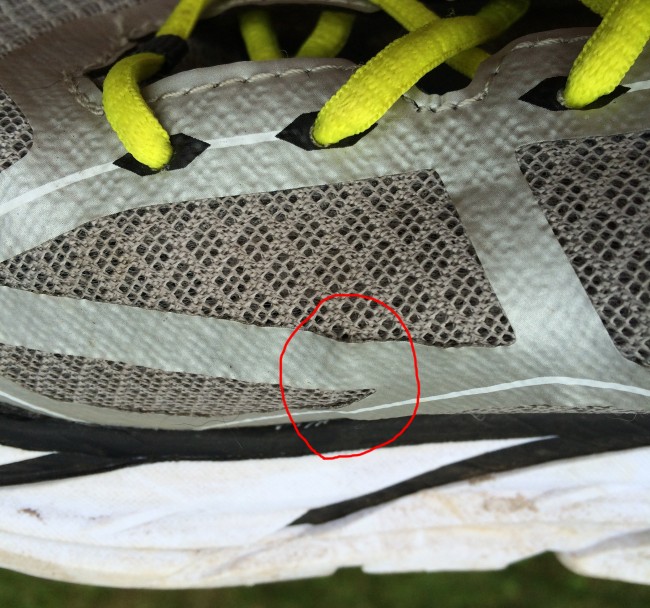 Despite my comments about the Cliftons making me feel like I have to work harder, I’ve actually enjoyed running in the shoes. I enjoy the challenge of trying to figure out why a shoe is not a good match for me, particularly when so many others have had a positive experience with it. The Clifton fits me great, is very comfortable, and is super light for a shoe with this much cushion. But for my stride it’s just a bit too soft (as a side note, I have gotten in one run in the Hoka Huaka and the RMAT midsole is more responsive and I think they’ll be a better match). That being said, if you are interested in trying a Hoka shoe, I’d encourage you to give the Clifton a shot. It’s on the lower end of the Hoka price range ($130 MSRP), and it has the Hoka cush that a lot of people love in an extremely lightweight package. I’m glad I gave them a try!

The Hoka Clifton is available for purchase at Running Warehouse, Zappos, and at the Hoka website. In Europe they can be purchased from www.hokaoneone.eu. Purchases made via these links provide a small comissions to Runblogger and help to support the production of reviews like this one – thanks!