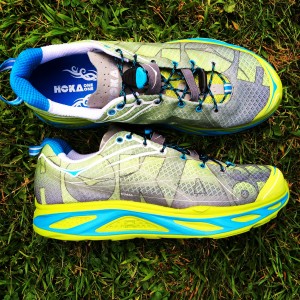 A few weeks ago I reviewed the Hoka Clifton. It was my first experience in a Hoka shoe, and my reaction was mixed. I was impressed by fit and comfort – it was the first Hoka I’ve tried on that seemed to be a good match for my foot shape. However, the ride was a bit too soft for my taste and it made me feel like I was working harder than I needed to be for a given pace.

My friend Sam Winebaum recently wrote a comparison review of the Clifton vs. the Hoka Huaka in which he indicated that the Huaka felt like a faster, more dynamic shoe. He had suggested to me that it might be a better match for my personal preferences. After putting some miles on the Huaka, I have to agree – it’s a much better match for my stride, and I’ve actually quite enjoyed running in them. (Disclosure: the shoes reviewed here were media samples provided free of charge by Hoka).

It’s hard to review the Huaka without comparing it to the Clifton because the two shoes share a lot of similarities, but also some notable differences. Both weigh in under 10oz in men’s size 9 (9.2oz for the Huaka, 7.8oz for the Clifton). However, I’d be hard pressed to notice the difference in weight holding them in my hands or with them on my feet. According to Hoka, both shoes are also relatively low-drop. They report sole stack heights as 27mm heel, 25mm forefoot for the Huaka (2mm drop), whereas the Clifton measures in as 29mm heel, 24mm forefoot (5mm drop; Note: Running Warehouse reports slightly different stack numbers with the Huaka being 4mm drop and the Clifton 6mm drop). As with the weight, the drop does not feel noticeably different to me. 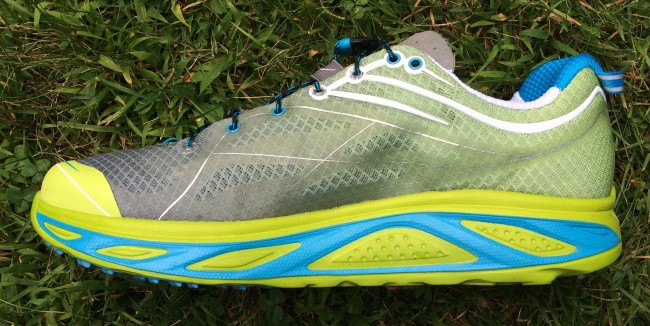 Like the Clifton, the Huakas fit my feet quite well. The Huakas feel ever-so-slightly snugger to me, perhaps more of a performance fit. My pair of Huakas came with two separate insoles to allow customization of fit (my Cliftons came with only one). Both are very thin (about 2mm thickness) – one is a softer Ortholite material whereas the other is a more standard EVA insole. The EVA insole has a more pronounced “cupping” around the heel whereas the Ortholite insole is pretty much flat. I’ve run with the EVA insole only, and with them both in at the same time which creates a snugger fit.

The upper mesh on the Huaka is breathable with welded overlays (it also lets sand in as I found while standing in them on a beach along the Merrimack River) – it almost looks like the same mesh used on the upper of the Clifton. There is slightly less external structure around the heel of the Huaka, but the innner lining of the heel is almost identical in terms of material and cushion in both shoes. Aesthetically I like the look of both shoes, but the Huakas have a bit more flash – really like the green/blue colorway.

A big difference between the Huaka and Clifton has to do with the lacing system. The Huaka comes with speed laces installed and has 7 eyelets on each side. The Clifton has standard laces and only 5 eyelets on each side. On the Huaka, the speed laces do not go through the uppermost eyelet which could be a problem if you have trouble with heel lockdown. They do include a pair of standard laces in the box in case you need to cut the speed laces off. Personally, I have a fairly high-volume foot and the speed laces worked OK for me – no heel slippage noticeable. There are two little stretch bands that you can tuck the speed-lace slack into that work pretty well. The tongue on both shoes is very thin and both are made of a similar mesh to that which composes the upper. 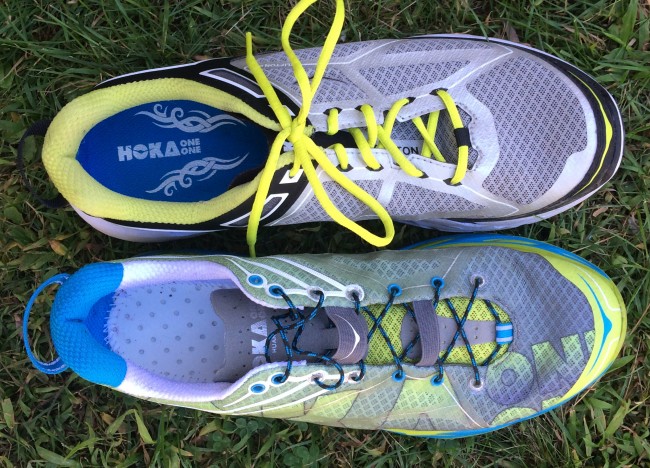 The sole is where the differences between the Huaka and Clifton really stand out. The Clifton has a midsole made of CMEVA (compression molded EVA) whereas the Huaka sole is composed of a material called RMAT, which is a blend of rubber and EVA. I personally found that the Clifton midsole felt too soft, almost mushy underfoot (though I know lots of people who love the feel). The Huaka midsole feels firmer and more responsive, and I don’t feel like I’m battling the sole like I did with the Clifton. I’ve been doing a lot of Fartlek-type runs lately and have pushed the Huaka down to 5K pace without issue. It’s not a shoe I’d choose to race a 5K, but I’m more comfortable running fast in them as compared to the Cliftons. 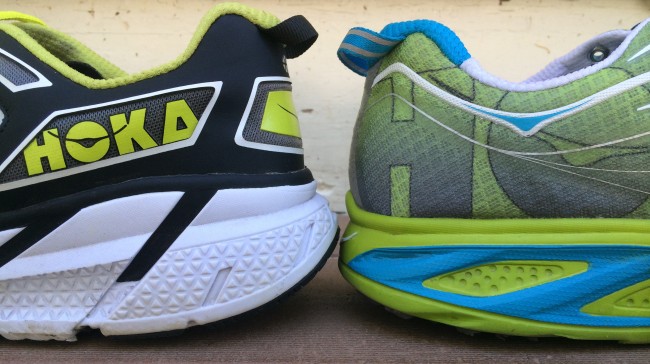 Another noticeable difference between the soles of the Huaka and Clifton is that the Clifton seems to have a more pronounced rocker, with the heel in particular curving upward more dramatically in the Clifton (see photo above). In my review of the Clifton I indicated that the rocker made me feel like I was landing more toward the midfoot in that shoe. In contrast, the heel of the Huaka does not have the same kind of curvature, and I feel like I’m landing with my more typical mild heel strike (and wear patterns seem to support this).

The Huaka has rubber outsole coverage at the heel, a small patch on the outer forefoot, and underneath the big toe and inner forefoot. The outsole in the Huaka has small chevron-shaped lugs since it is intended as a road/trail hybrid built for speed. Don’t expect spectacular grip from the Huaka – I don’t run a lot of technical trails, but have done about a third of my miles in the shoe on river trails with lots of sand and some mud. I haven’t slipped, but I nearly took a dive after stepping on a wet log crossing a trail. The midsole is thick enough that I have not had any issues running over rocks, roots, etc. 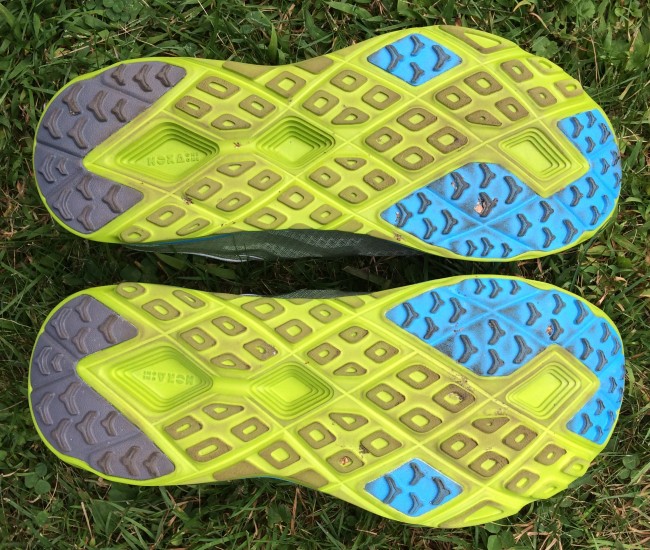 The Huaka performs very well on asphalt and concrete – the lugs are low enough that they don’t get in the way, and I have run from easy pace down to 5K pace on the road with no issues. I have found that the front two lugs on the outer heel have worn down a bit with the road miles (my typical wear area, though in the Clifton it was a bit further forward).

For a more minimal leaning runner like me, the decision to try a Hoka shoe will most likely start with consideration of the Clifton vs. the Huaka. For me, the choice would be the Huaka, for others it will be the Clifton.

Though the Huaka is a tad heavier, lower drop, and has small outsole lugs, I would not use these as the deciding factor between the two shoes. The difference really comes down to what you want in terms of ride, which is mainly influenced in these shoes by differences in sole feel and rocker. If you want a softer shoe with a more pronounced rocker, go with the Clifton. If you want a firmer, more responsive sole with a less pronounced rocker, go with the Huaka. My guess is that everyone will be slightly different in terms of preference here so trying both on is probably the safest bet.

The Hoka Clifton is available for purchase at Running Warehouse, Zappos, and at the Hoka website (or at your local run specialty store). In Europe they can be purchased from www.hokaoneone.eu. Purchases made via these links provide a small comission to Runblogger and help to support the production of reviews like this one – thanks!