Intro from Pete: Guest reviewer George Harris is a 58 year-old runner from Manteca, CA. He’s been running for 36 years, most of that as a soldier in the US Army. George currently runs 70-75 miles per week, many of those miles in Hoka One One shoes. George has previously reviewed the Hoka Rapa Nui Comp here on Runblogger – here he shares his thoughts on the Hoka Kailua Tarmac.

The Hoka Kailua Comp is the road version of the Rapa Nui Comp (which will apparently be renamed as the Kailua Trail) and will be known in the US as the Kailua Tarmac (a bit confusing!). You might think of this shoe as the little brother of the Hoka Stinson Tarmac.

I’ve run in every model that Hoka has produced so far (Bondi B, Bondi Speed, Stinson Evo Tarmac, Stinson Evo, and Mafate). The Kailua Trail up to this point was my favorite Hoka. In fact, I saw photos of Karl Meltzer wearing a pair during the recent Hardrock Hundred Endurance Run. Being a fan of Hoka shoes, I had to acquire the road Kailua to see what it was all about.

Hoka is known for its big, super cushioned running shoes while other companies seem to be intent on trimming shoes down. The Kailua Tarmac was meant to be a “road racing Hoka” – it’s definitely not a racing flat in the traditional sense, more of a Hoka take on a road racing shoe.

The first thing one will notice about this shoe is that it is not as big or bulky looking as other Hoka shoes. It has the same chassis as the Kailua Trail and the upper has mesh with welded overlays with a tongue of thin suede-like material that is similar to that on the Stinson Tarmac but thinner and softer. 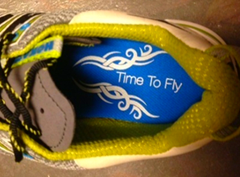 The shoe comes with a 2mm Ortholite insole that is flat with no contour (see photo). I swapped this out for my Foot Balance insoles and there was more than enough room. I’ve found the upper to be reasonably breathable, and I’ve had no issues in temps of 90 degrees (both dry heat and in humidity).

The midsole is blown EVA, but only 1.5x volume compared to 2x volume for other Hoka shoes. For example, my Bondi Speed has 35 mm of midsole in the rearfoot and 30 mm in the forefoot. The Kailua Tarmac has 26 mm in the rearfoot and 21 mm in the forefoot. With this reduced volume it comes as no surprise that the Kailua Tarmac weighs less as well. My unscientific test showed about 0.75 oz less weight for the Kailua Tarmac versus my Bondi Speed (both size 11.5). This is about the same as my Kailua Trail. The outsole is smooth, similar to its big brother the Stinson Tarmac. 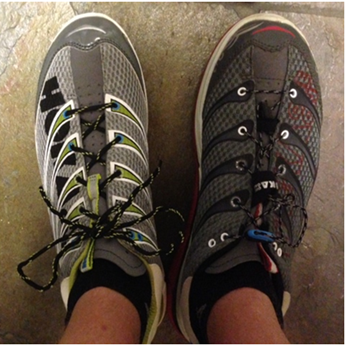 I ordered a size 11.5 since that’s the size I’ve worn in every other Hoka I own – they fit perfectly. With Drymax thin socks the shoe fits great. I put some thicker socks on and there was still enough room, unlike the Kailua Trail which felt a little snug with thick socks. With thicker socks I’d move up to a size 12 in the Kailua Trail. The Kailua Tarmac is a bit narrower than the other Hoka shoes in the rearfoot area as this is a “racing Hoka.” The shoe had ample room in the toebox, however, not as much as my Bondi – it did feel a bit roomier up front than the Kailua Trail.

The midsole extends up and around the upper to create what Hoka calls their “bucket seat” for the foot. I had no slippage issues in the heel area on this shoe. The shoe comes with regular laces, which I found a bit strange. Why does the trail shoe have speed laces and this road shoe (that could be used by triathletes) not have them? That said, I felt I could get a better fit with the regular laces than with the speed laces of the Kailua Trail. The shoe is far more flexible than other Hoka shoes and the rocker effect, while less pronounced, is still there and does allow one to get “on their midfoot” a bit more. This is the same sensation as with the Kailua Trail.

I’ve taken seven runs with the Kailua Tarmac, mostly on the road, but threw in a trail run just to see how they would work (45 miles total). While the shoe is still well cushioned (it is a Hoka after all), it doesn’t have that plush feel of my Bondi Speeds. The midsole feels firmer than the Bondi but in my opinion it has better cushioning than the adidas Energy Boost shoe. This shoe is billed as a performance shoe and has 9mm less cushioning than the Bondi. The forefoot is more flexible like a normal running shoe.

Running at faster speeds the shoe felt great. It is absolutely fantastic on the road with a very smooth feel. It has a much better road feel than the Kailua Trail and dare I say it feels a bit more cushioned. On the trail it did ok but it did not have the traction of the Kailua Trail and would not be useful for anything other than well groomed trails. Running uphill was great and similar to the feel I had with the Kailua Trail, and coming downhill the cushioning was adequate and it protected my knees. I wondered if this shoe would be as stable as the Kailua Trail and I can report that it was very stable and I had no issues. 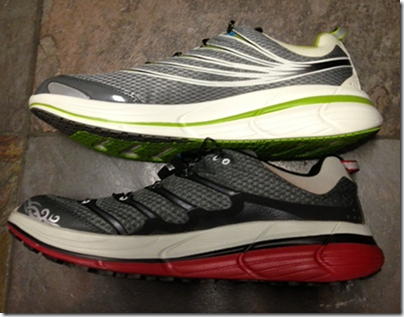 I really like the Kailua Tarmac and it has become my “go to shoe” for my road workouts. This shoe has all the things I like about Hoka shoes in a performance package: cushioning, stability, and it protects my knees.This shoe has a little less of the “Hoka cloud” feel, but adds more flexibility, less weight, and smooth performance oriented feel on the road. I think it’s a real winner and will give Hoka wearers and others a shoe they could race in on the road.

The women’s Kailua Trail and Kailua Tarmac are now available for purchase at Zappos. In Europe both men’s and women’s shoes can be purchased direct from Hoka.