Hoka One One Rapa Nui Comp Review by George Harris 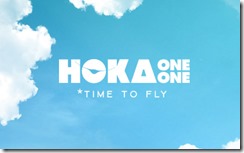 Intro from Pete: Guest reviewer George Harris is a 58 year-old runner from Manteca, CA. He’s been running for 36 years, most of that as a soldier in the US Army. His first pair of real running shoes was the 1978 Nike Waffle Trainer, which cost the outrageous price of $45.00. George currently runs 70-75 miles per week, many of those miles in Hoka One One shoes. Here he shares his thoughts on the newest Hoka shoe, the Rapa Nui Comp.

First off let me state that I am a fan of Hoka One One shoes and so is my wife. They have helped me conqueror my persistent left knee pain to a point where it no longer bothers me while running. Likewise, they have really helped my wife with her grumpy knees. They have also helped my legs in that they don’t feel trashed at the end of 70 plus mile weeks. I’ve run in every model they have (Bondi B, Bondi Speed, Evo Tarmac, Stinson Evo, and Mafate). The Bondi B and Bondi Speed seem to work the best for me.

Hoka is known for its big, super cushioned running shoes while other companies seem to be going to minimalism. Enter what could be called “racing Hokas” – the new shoes are the Rapa Nui Comp (trail version) and Kailua Comp (road version). Being a fan of Hoka shoes I had to acquire the Rapa Nui to see what this shoe was all about.

Hoka One One Rapa Nui Comp

The first thing one will notice about this shoe is that it is not as big or bulky looking as other Hoka shoes (see photo below comparing the Bondi Speed with Rapa Nui Comp). 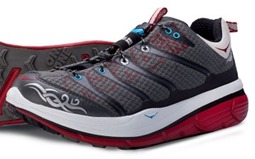 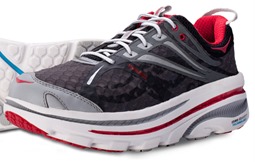 The upper is mesh with welded overlays. The tongue is made of a thin, suede-like material that is similar to the Tarmac but thinner and softer. Not sure how breathable this shoe will be but I had no issues in temps of 90-100 degrees (but it was a dry heat).

The midsole is blown EVA as in other Hoka shoes, but only 1.5x volume compared to 2x volume for other Hoka shoes. For example, my Bondi Speed has 35 mm of midsole in the rearfoot and 30 mm in the forefoot. The Rapa Nui has 26 mm in the rearfoot and 21 mm in the forefoot. With this reduced volume it comes as no surprise that the Rapa Nui weighs less as well. Some reviewers have noticed as much as an ounce in weight difference between full size Hoka shoes, like the Tarmac, and the Rapa Nui. My unscientific test showed about 0.75 oz less weight for the Rapa Nui versus my Bondi Speed (both size 11.5). The outsole has lugs that should (and did) handle single and double track trail terrain very well, although I did not test it in muddy conditions. The shoe comes with a 2mm OrthoLite non formed insole (not my favorite – I am looking for another insole to replace it) and speed laces. 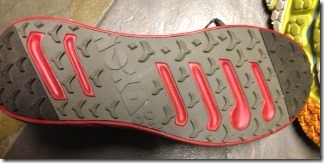 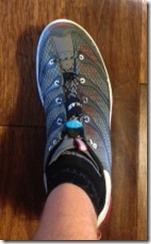 I ordered a size 11.5 since that size fits me perfectly in every other Hoka I have worn. Wearing thin Drymax socks the shoe fits fine. If I had thicker socks I probably would have opted for a size 12. The shoe is a bit narrower than the other Hoka shoes both in the forefoot and rearfoot areas. This is a “racing Hoka” after all. The shoe had ample room in the toebox area, however, not as much as my Bondi. The midsole extends up and around the upper to create what Hoka calls their “bucket seat” for the foot. I had no slippage issues in the heel area on this shoe.

The speed laces that come with the Rapa Nui are up to the task of securing my foot (I have not liked them in the past – for example I cut them off my Tarmacs and replaced them with regular laces; however they work fine with my Bondi Speeds). Unlike other Hoka shoes with speed laces there are no regular laces supplied with this shoe (I think that needs to change). The depth of the shoe will take an orthotic (it handled mine very well and left more than enough room in the shoe). 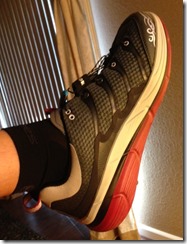 I have taken six runs with this shoe on a mix of trails and road (35 miles total). While the shoe is still well cushioned (it is Hoka after all), it does not have that plush feel of my Bondi Speeds. The midsole feels firmer than the Bondi but in my opinion it has better cushioning than the adidas Energy Boost shoe. One must remember that this shoe is billed as a performance shoe and has 9mm less cushioning than the Bondi.

The forefoot is flexible, more like a normal running shoe. In fact, the shoe is overall far more flexible than other Hoka shoes, but the rocker effect, while less pronounced, is still there and does allow one to get “on their midfoot” a bit more. Running at faster speeds the shoe feels great. It does work well on the road unlike some trail shoes that can be a bit harsh. So this is a great “door to trail” shoe.

Running uphill was a breeze compared to my Bondi Speeds. Coming downhill the cushioning was adequate to handle that portion well and protect my knees. On the trail it handled rocks and branches just like the Bondi – no issues even though there is no rock plate (the Bondi is like a tank on the trail while the Rapa Nui is more of a half track). I was concerned about how stable this shoe would be given that it does not have the wider profile of other Hoka shoes. I can report that it was very stable and I had no issues.

I like this shoe very much as it combines the things I like about the Hoka shoes in a more slimmed-down package: cushioning, stability, protection for my knees. So this shoe has a little less of the “Hoka cloud” sensation but with more flexibility, less weight, and a performance oriented feel. I think it is a real winner…now if they would only add those regular laces.