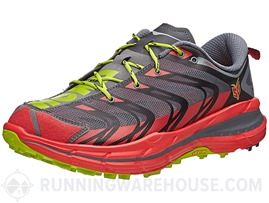 When I first received the Hoka Speedgoat, I was pretty sure that I would never run in them. I had heard from other runners that the fit was way too narrow, and upon taking them out of the box I was rather shocked by just how narrow the toebox looked. It honestly looks like a cross-country spike upper and last on a Hoka sole. After trying them on and confirming the tight fit, I put them back in the box and they sat in my basement for a few months.

(Disclosure: these shoes were provided free-of-charge by Hoka for review purposes.)

After our first snowfall back at the beginning of winter (snow has been minimal this year up in NH), I decided to take a shot at running in them – it was the only trail shoe I had that I hadn’t already reviewed (David Henry handles most trail shoes for me these days), and I suppose every shoe deserves at least one run (I once ran in the Springblade!). 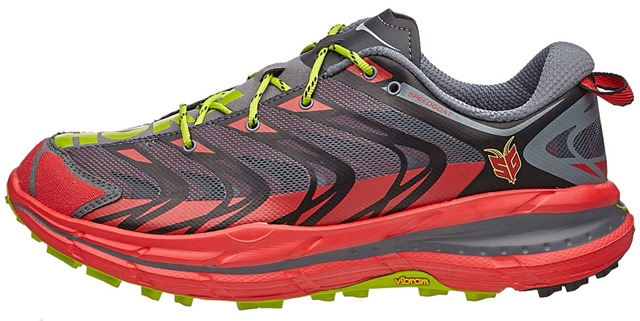 My first run was four miles on a rail trail, and though they were tight across the toes and forefoot, the run went pretty well, and the tightness didn’t bother me as much as I had anticipated. They handled well in the thin layer of snow, and the ride was somewhat reminiscent of the Hoka Huaka, a shoe that I liked quite a bit. They are a tad softer than the Huaka, have a slightly higher drop (Speedgoats are 35 mm heel – 30 mm forefoot per Running Warehouse), and the lugs are a bit deeper, but the two shoes compare favorably to one another.

Despite my problems with the fit, for some reason I kept coming back to the Speedgoats. I used them frequently in the snow this winter, and they were the shoes on my feet when I was bit by a German Shepherd while running on the trails behind my house on Christmas Day (an incident that sidelined me for two weeks). I’ve probably put close to 50 miles on them at this point, which is a bit of a surprise given my initial reaction to the narrowness of the toebox. That being said, my longest run in them was 7 miles, and I was feeling some discomfort up front by the end of that run. I would not run much longer than 5 miles in these given the fit issues – I would not recommend them to ultrarunners for this reason. 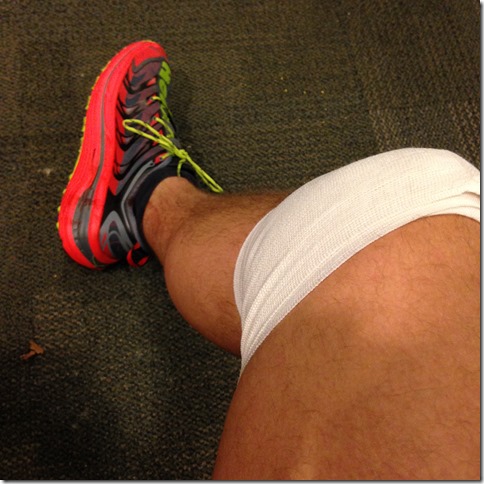 The red midsole does a good job of camouflaging blood…

The upper of the Speedgoat is a breathable, fairly open mesh with welded overlays and a rand along the region of junction between the upper and midsole. I have no major complaints about the upper, though the mesh does seem like it might let trail grit in given the more open weave. I have not run through water in these, so can’t comment on whether the rand creates issues with drainage. I’m not particularly crazy about the way the tongue extends down and forward to make up the central portion of the upper of the forefoot, but this has not caused any real issues. Mostly just an aesthetic complaint I guess.

The sole of the Speedgoat is springy, and not as mushy as a shoe like the Hoka Clifton. I’d say it’s somewhere in between the Clifton and the Huaka from a responsiveness standpoint. I really like the feel, and that’s one of the reasons why I keep coming back to them. They feel great underfoot on both road and trail. Durability has so far been good – I’ve done a fair amount of running on asphalt in these shoes, and the Vibram rubber is holding up very well so far.

The outsole of the Speedgoat is a bit more aggressive than that of the Huaka, and traction has been solid on light snow. I haven’t put them to the test in wet or muddy conditions, but they are adequate for the type of trail running I do (mostly non-technical).

So the Speedgoat is a mix of good and bad. I really like the ride, and have enjoyed running in them from that standpoint, but the narrow fit is a real limitation for all but the most narrow-footed. If you can comfortably run in cross-country spikes, these are probably going to be fine for you (though I would recommend going up a half size if you buy them). If not, they may not be a great choice.

I like them for shorter runs on trails, but a shoe with a 30mm+ stack height isn’t really what I typically need for shorter, quicker runs. And I definitely would not pay $140 for a shoe with such a limited a range of uses. Hopefully Hoka will retool the fit if they come out with a v2 – the shoe has a lot of potential, but is really hobbled by the fit.

The Hoka Speedgoat is available for purchase at Running Warehouse.