Home Cobbling: Cutting the Heel off the Mizuno Ronin 2 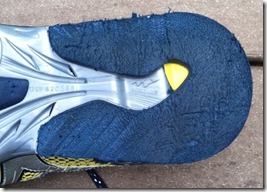 Of all of the 40+ shoes I have run in over the past 2+ years, the Mizuno Ronin 2 ranks right near the top in terms of comfort (along with the New Balance MT101 and a few others). The Ronin 2 is very roomy, and the forefoot is both wide and high volume (sadly, Mizuno reduced the forefoot width in the Ronin 3). The one problem with the shoe, however, is that it had a 9mm heel lift (23mm heel, 14mm forefoot). This exceeds my heel lift tolerance these days, and the shoe had been relegated to my closet quite awhile ago. Quite a shame, as the Ronin 2 is a very nice shoe…

A few months ago, my friend Tuck from the Yelling Stop Blog offered to send me a pair of New Balance MT101 trail shoes that he had taken to a cobbler in order to have the sole leveled out. Tuck prefers to run in very minimal shoes like the Vibram Fivefingers, and he had not gotten much use out of the zero dropped MT101’s. Tuck’s cobbler did a fine job on the shoes, and I have been wearing them frequently this summer (including on a run/hike up the Flat Irons in Boulder last weekend!). Below are pictures that compare my standard pair or MT101’s (about 8mm drop) to Tuck’s zeroed MT101’s:

Wearing the zeroed MT101’s around got me thinking – maybe I should take a few pairs of shoes to a local cobbler and have them zeroed off. The Mizuno Ronin’s were the first candidate that popped into my mind. Ever since I first looked at the Ronin 2, I had contemplated trying to cut down the heel. Because the sole under the heel is separated from that of the forefoot by the exposed plastic wave plate (see photo below), I figured that of any shoe, this one would be an easy hack job. Rather than go the professional route, maybe I could just do it myself? All I would have to do would be to shave the heel off just below the ridges of the silver wave plate (see photo below), and it would bring the Ronin to nearly zero drop.

Earlier today I finally got up the guts to make my first attempt at modifying the sole of a running shoe. I gathered the tools that I thought might come in handy (I’m quite happy that my wife wasn’t home when I did this…): 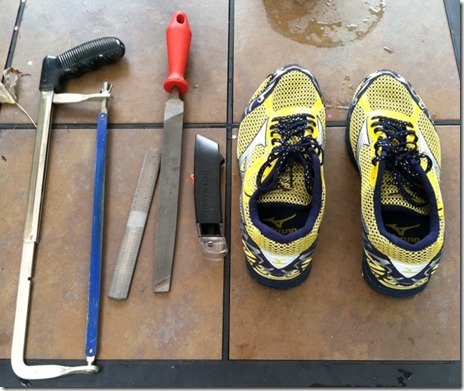 As it turns out, the hack saw and the metal file were all that I needed. I used the hack saw to cut the heel off in one piece: 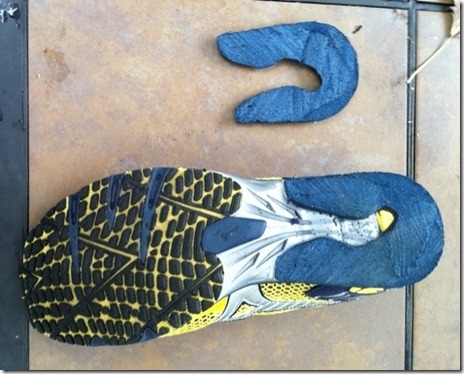 I then used the metal file to even and smooth off the exposed EVA. I also found that simply putting the shoe on my foot and rubbing the exposed heel back and forth on a patio brick did a nice job smoothing it out: 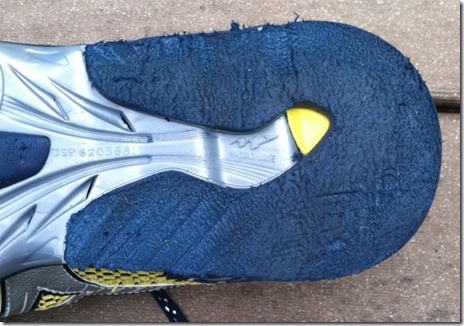 In all, I wound up taking about 8-9mm off the heel, and measurements with my digital calipers indicate that the shoe is now about 1mm drop from heel-toe (see before and after photos below).

My main concern initially was that by removing so much of the heel, I would be able to feel the plastic wave plate under my foot. However, upon putting the shoes on they felt quite comfortable, very much like my zero dropped New Balance MT101’s. Haven’t had a chance to run in them yet, but I’m now very much looking forward to giving them a try. I could see this becoming a bit of a habit, just need to find some real cobbling tools!