Home / Blog Posts / How Becoming a Runner Changes You: Feedback From My Beginner 5k Group

How Becoming a Runner Changes You: Feedback From My Beginner 5k Group 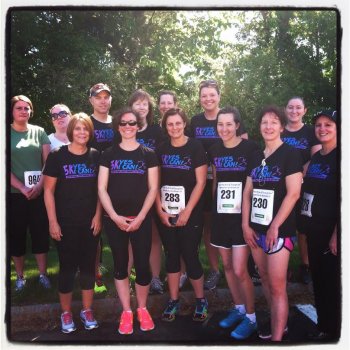 One of the cool things that my 5K Yes I Can! co-coach Erin Girzone (Erin is in the pink shoes in the photo at left) arranged for our group this year was a before-after interview with a reporter from a local paper. She wanted to document how people changed after completing the program.

Keith Testa from the Concord Monitor came to one of our workouts early on in the program to chat with some of our runners, then he returned the day of our target race and interviewed the same people again. The responses are incredibly gratifying for me as a coach, and you can read them all in Keith’s article titled: “We unearthed scientific proof that you can learn to love running.” To give you a sampling, here is what a few of the runners had to say (all four of the individuals below were non-runners at the start of the program):

Words you would associate with running. Before: Painful, cranky. Always look like you’re having a terrible time. After: Awesome, fun, liberating. All great words.

How would you describe your mental state before/during/after a run? Before: A friend convinced me to sign up. The threat of public humiliation is a pretty powerful motivational force. After: I feel glad it’s over, but pretty proud of myself that I can finish. After: I feel like it’s going to be fun. I find it to be a great stress reliever now, I seek it out. If I’m having a bad day, I feel like I want to put on my shoes and go for a run.

How would you describe your physical state before/during/after a run? Before: Usually by the next day, I’m OK. Right after, though, I sort of limp over to my car. After: I feel a lot better. If I’m sore, I know now from experience that it gets better.

Words you would associate with running. Before: Aerobic. I don’t think fun would be a word I would use. After: Getting fit, cameraderie – I think those would be the ones I associate the most with it. I’m not sure I would have started on my own. I like the pace of doing it with a group.

How would you describe your mental state before/during/after a run? Before: I feel good, I feel like I accomplished something. After: You definitely feel like you want to keep up with the group. There’s sort of an ownership to it, to yourself and the group.

Words you would associate with running. Before: Death? No, I always wanted to do it. People said if you bought into it, by week six it would pay off. Pete and Erin always said that too, but by week four I thought, this is probably as much as I’m going to do.  After: After week 8, that doubled. I didn’t believe that I would be able to, but two weeks ago I was running 5ks without stopping.

How would you describe your mental state before/during/after a run? Before: Even the first time we met, I was thinking, oh, I don’t want to do this, let’s just go and get it over with. After: Now I kind of look forward to it. I pick out my playlist of what I’m going to listen to and map out where I’m going to go. I wake up specifically to do this, and I feel better on days that I do.

How would you describe your physical state before/during/after a run? Before: The first few times I did it, I actually would even have a hard time breathing for a couple of days afterwards because my lungs weren’t used to it. After: Now I go out for a run and I feel great when I get back. I feel like I can keep going sometimes.

You just finished reading How Becoming a Runner Changes You: Feedback From My Beginner 5k Group! Consider leaving a comment!