How Can Both Barefoot Running and Hokas Reduce Knee Pain?–A Possible Explanation from a New Study 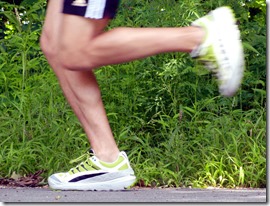 I occasionally experience pain along the outer margin of my left kneecap. It’s never severe enough to keep me from running, and it seems to come and go without much explanation. My most recent bout seemed to crop up after a run in the new Mizuno Sayonara – I can’t say for sure that the shoe had anything to do with it, but it has a much higher heel than I’m used to and I could tell that it was altering my gait a bit.

Last Saturday on a 13 mile run I was playing with my stride to see how it would affect the mild ache in my knee. It seemed that when I relaxed all of the muscles below my knee the ache would subside. If I forced a forefoot strike with a slightly stiffened leg it also seemed to help. However, if I really forced dorsiflexion of my foot prior to ground contact via contraction of the tibialis anterior the pain seemed to perk up. These are the fun things I like to do while running – figuring out how to make my knee hurt! I spent a good long time thinking about possible mechanisms that might be at play to cause these changes.

Somewhat fortuitously, a journal article abstract arrived in my inbox this morning from Medicine & Science in Sport & Exercise that was titled “Increasing Running Step Rate Reduces Patellofemoral Joint Forces.” The paper was by a team from the University of Wisconsin led by Rachel Lenhart – it’s a group that I’ve written about before here on Runblogger (here and here), and I have found their previous studies to be fascinating.

In the current study, the team filmed 30 runners on an instrumented force treadmill, and used a biomechanical model to estimate forces through a number of muscles, tendons, and joints in the legs. Runners were filmed at their preferred step rate, and also at 90% (lower cadence) and 110% (higher cadence) of their preferred step rate to see how altering cadence affected these forces. It’s important to note that forces were estimated via modeling and not by actual sensors in the tissues (that would be a tough study to do!), so that is always something to keep in mind in a study like this – results are only as good as the model (and I don’t have the expertise to evaluate the model they used).

What the research team found was very interesting. Here is a list of key findings taken from their results:

6. Compared to the preferred cadence, running at 110% of preferred step rate resulted in “an average 3.3 degree (7.0%) decrease in stance phase peak knee flexion, a 2.5 degree (8.4%) decrease in ankle dorsiflexion at mid-stance, and a 1.8 degree (10.6%) increase in knee flexion at initial contact (all variables, p<0.005 - data not shown). So at a higher cadence the knee was more flexed at contact, but peak flexion at midstance was lower.

7. Peak vertical ground reaction forces were reduced by 2.6% at 110% of preferred step rate.

In a nutshell, these results suggest (and I’ll use the word suggest since this was a modeling study and actual internal forces were not measured directly) that peak forces and rate of force application through the patellar tendon and patellofemoral joint are reduced when cadence is increased by 10% over preferred (i.e., a shorter, quicker stride), and increased when cadence is reduced 10% from preferred (i.e., a slower, longer stride).

Perhaps more interestingly, they suggest that the key factor explaining this result is not so much the peak vertical ground reaction force (which has been the focus of much of the debate relating to form change of late), but rather the maximum amount of knee flexion during mid-stance (i.e., the maximal amount that the knee bends). I find this particularly interesting in light of my own knee ache since one of the most effective ways to make it go away is to stiffen my affected leg and land on my forefoot. My guess is that what is happening is I shorten my stride and flex my knee less by doing this and it reduces the force through the affected tendon. Now I need to put the Sayonaras back on with a cadence sensor attached and see if I can make some magic happen!

Another reason why I find this result fascinating is in light of the anecdotal evidence from fellow runners who have described how they have made knee pain disappear by either A) running barefoot or B) running in maximally cushioned, low-drop shoes like Hokas. I was actually asked this very question while giving a talk last week at a running camp – how can two such different approaches both lead to a reduction in knee pain? My response was that there are likely multiple ways to accomplish the same goal of reducing loading at the knee. I didn’t give much thought to the mechanisms, but possibilities are starting to crystallize a bit in my head.

The barefoot explanation is easy. It has been well characterized that barefoot running tends to result in a shorter, quicker stride with greater knee flexion at initial contact but less peak knee flexion at midstance (I write about this extensively in Chapter 8 of my book). These are the exact patterns show in the Wisconsin study at 110% of preferred cadence. So taking your shoes off could very well lead to kinematic adaptations at the knee that reduce loading and in turn diminish knee pain. This is why I advocate giving barefoot or a very minimal shoe a try (very gradually!) if you have chronic patellofemoral pain. If the alternative is not running, it can’t hurt to give it a shot.

But what about Hokas? My initial thinking when I was asked the question was that the extensive cushioning reduced ground reaction forces or loading rates and thus somehow benefitted the knee. After reading this paper I’m thinking of a slightly different mechanism. The Hokas are a super soft shoe. One of the kinematic adaptations to running on a very soft surface (think sand or trampoline) is to stiffen the leg. I’m wondering if one of the adaptations to running in Hokas is increased leg stiffness and reduced knee flexion at midstance. This could explain the reduction in knee loading reported by many runners who have fallen in love with these shoes. with the right lab setup it would be relatively easy study to take a bunch of runners and compare joint kinematics barefoot, in a traditional shoe, and in Hokas and compare things like peak knee flexion at midstance. I await the results!

In the meantime, I might have to dust off my Hokas and take them for a second run, followed by a bit of distance barefoot. I’m curious how my knee will feel in the two conditions. If I decide to do it, I’ll report the results!

You just finished reading How Can Both Barefoot Running and Hokas Reduce Knee Pain?–A Possible Explanation from a New Study! Consider leaving a comment!