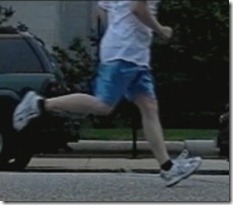 There has been a great deal of discussion and debate over the past few years about how various aspects of running form can potentially contribute to increased injury risk in runners. One aspect of form that is often singled out as a major no-no is overstriding. That is, runners should not lengthen their stride by reaching out with the foot and landing with an initial contact point that is too far out in front of the body. If stride is to be lengthened, better to do it on the backside through increased hip extension.

Indeed, a number of studies have shown that reducing stride length or increasing cadence (steps/minute) can reduce loading on the knees and hips (I summarize a number of these in Chapter 8 of my book), and thus form adaptation focused on alterations of stride length are thought to be of potential benefit in the treatment and/or prevention of some types of overuse injuries (e.g., tibial stress fracture, anterior knee pain).

A recent study headed up by Elizabeth Chumanov from the University of Wisconsin sought to address how muscle activity in the lower extremity changes as step rate is increased (which corresponds to shorter strides). The study is titled “Changes in muscle activation patterns when running step rate is increased” and is published in the journal Gait & Posture. It’s a cool little study, and very relevant to the ongoing debate about form.

The authors open their paper by pointing out that previous research has shown the following changes (among others) in association with a 5-10% increase in step rate from an individual’s freely chose step rate:

Given these observed patterns, the authors hypothesized that “running at a step rate greater than one’s preferred would result in decreased muscle activities during the loading response and
increased activities during late swing phase” of the gait cycle.

The study protocol involved having 45 individuals run at their preferred speed (i.e., speed was held constant across step rate variations) on an instrumented treadmill at each of three step rate conditions: 1) preferred step rate, 2) +5% of preferred step rate, and 3) +10% of preferred step rate. A digital metronome was used to specify step rates that each runner needed to match for each condition. While the subjects ran at the three step rates, they were filmed with a three-dimensional camera system, ground reaction forces were measured, and muscle activity was recorded using both wired and wireless surface EMG electrodes (having done a bit of EMG work myself in the past, I’m quite envious of wireless capability – technology has advanced rapidly!). EMG recordings were taken from the following muscles: gluteus medius (butt muscle), gluteus maximus (butt muscle), rectus femoris (central quadriceps muscle on thigh), vastus lateralis (outer quad muscle on thigh), medial and lateral hamstrings (back of thigh), medial gastrocnemius (calf) and tibialis anterior (front, outer shin).

Results showed no differences in muscle activation between the preferred step rate and the +5% condition, despite the fact that previous studies have demonstrated postural and loading changes between these conditions. However, when step rate was increased by 10%, the following patterns were observed:

As can be seen, muscle activity changes associated with a 10% increase in step rate all occurred during the swing phase (while the foot is not in contact with the ground), with most occurring during mid- to late swing phase as the leg prepares for impending ground contact. The authors suggest that although muscle activity during loading did not change, pre-activation of muscles prior to initial contact influences limb stiffness at contact. They point out that reduced hamstring pre-activation during swing phase has been linked previously to reduced running economy, and they suggest that increased hamstring pre-activity observed at higher step rates might contribute to reduced loading at the knee via the effect of this muscle activity on landing posture. They also suggest that increased activity of the gluteal muscles in late swing phase could contribute to the altered movement and loading of the hip that has been observed with increased step rate, and they indicate that increasing step rate might be a good way to facilitate activation of the glutes for therapeutic purposes (e.g., in patients with anterior knee pain where glute strengthening is a common rehab approach). 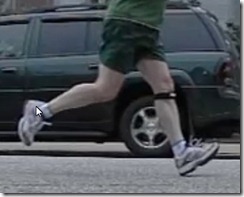 Let’s try to translate these results into a clearer description of what is happening. Imagine an overstriding runner who lands with the foot way out in front of the knee and the foot inclined 45 degrees relative to the ground at contact (like the one in the photo to the left). Generally, this type of stride is associated with a fairly low step rate. Now suppose we have this person increase their cadence by 10%. Previous work has shown that this results in the outcomes discussed above: the foot lands flatter, contact shifts closer to the body, the knee is more flexed at contact, and hip and knee loading are reduced. What’s cool about the Chumanov study is that it shows how these postural changes are accomplished at the level of the muscles. Initial leg swing is sped up by activation of the rectus femoris. At the end of swing, contact is pulled closer to the body by the hamstrings, which slow the forward swing of the lower limb just prior to contact, as well as the glutes, which start to pull the thigh back a bit prior to contact. The calf muscle pre-activates to a greater degree, and the tibialis anterior on the front of the shin reduces its activity, resulting in a flatter foot plant.

My friend Brian Martin over at Running Technique Tips will love this study because he really hammers on the importance of proper hamstring and glute activation and strength to running efficiency. It also raises a ton of questions in my mind about the relationship between overstriding, muscle strength, and footwear. Given that many of us spend much of our day sitting in a chair, our hip flexors tend to tighten, leading to an imbalance in hip muscle function. Tight flexors reduce our ability to extend the hip on the backside, and thus we need to elongate in the front to gain stride length. If we also have weak hamstrings or improper hamstring activation, they may be less able to pull the lower leg back prior to contact. It’s a recipe for overstriding. Add on to all of this a heavy pair of shoes at the end of the foot that increases the moment of inertia of the lower leg as it rotates at the knee (think about swinging a golf club while holding the handle vs. holding the head – which is harder to slow down?). As we swing that foot forward with a heavy shoe at the end, it may be harder for the hamstrings to do their job to slow the leg down and prepare it for landing. I’m wondering if this might explain why I can run relatively comfortably in a lightweight shoe with a relatively high heel-forefoot drop (like the Adidas Adios) but can’t stand heavy shoes with a high drop. Shoe weight has always been one of the things that I have been most sensitive to, and this has got me thinking…

The authors conclude with the following summary:

“The results from this study show that increasing step rate is associated with an increase in muscle activity primarily during late swing phase. This increased muscle activity in anticipation of foot-ground contact likely alters the landing posture of the limb and subsequent joint moments and energy absorption. Further, the increased activity observed in the gluteus maximus and medius suggests running with a greater step rate may have therapeutic benefits to those with anterior knee pain.”

A possible take home message: you hamstrings and butt are there for a reason, use them well!