Home / Blog Posts / How To Avoid Chafing While Running: Nipples, Thighs, and Other Problem

How To Avoid Chafing While Running: Nipples, Thighs, and Other Problem Spots 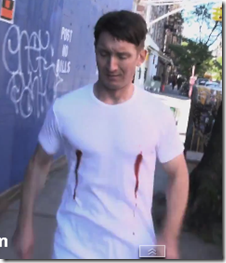 It happens every Spring almost without fail – I’ll be out for a run and I start to feel a bit of discomfort under my shirt and/or between my thighs. If I’m lucky it’ll happen on a short run and the damage will be limited. If I’m unlucky I’ll be 5 miles from home when the discomfort begins, and will have no choice but to suffer through the remainder of the run. The worst of the pain happens in the shower afterward – the combination of soap and hot water conspire to cause agony, and I need bite my tongue to choke back the screams

What’s this problem I speak of? Chafing. It’s something I never have to deal with in winter, but once the warmth returns and I start sweating, so returns the chafe. Chafing is a common problem for runners, and it seems that where chafing is localized varies from person to person. For me, chafing tends to strike in two places: my nipples and my inner thighs (no holding back here!).

Nipple chafe is extremely common for guys in summer. Once our shirts get wet, the rubbing of fabric against bare nipple starts to do its damage. The damage starts as a sting as the skin gets rubbed raw, and can progress to bleeding if allowed to continue. If you’ve ever watched the finish line of a warm-weather marathon you have likely seen men who have attempted to run without protection. Tell-tale red circles over the nipples are a dead giveaway, often with bloody streaks extending down toward the waist line. I’ve been fortunate enough to avoid blood, but I’ve seen others in races who were not so lucky. I can only imagine the pain. 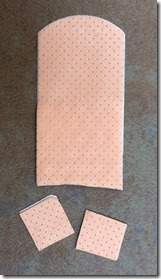 Fortunately, nipple chafe is actually very easy to avoid. I used to apply Body Glide prior to runs where I suspected nipple-chafe might be a problem, but stopped this practice when I realized that it was creating circular stains on my shirts that would not come out in the wash. I know some guys who use products like Nipguards or those little circular bandaids to protect their nipples. I’ve never used Nipguards, but they cost like $10 for 10 sets, and that can get costly. And I’ve found that circular bandaids are a bit too large and can thus stick to chest hair.

I’ve now adopted a far more effective method of protection – I cut up Band-Aids into little squares that are just about the size of my nipples. I prefer the Sport Strip style since they seem to stay put. This method is cheap, and it works very well. I can get 4 sets of nipple squares from one extra-large Band-Aid sport strip, and for a 30-count box that gives me 120 sets for about $3.50. I have not had them fall off on any run I have done so far.

As an added bonus, the Band-Aid trick is great for embarrassing your wife and kids. I’m sure they love it when I run to meet them at the pool in the summer and forget I’m wearing little square bandaids on my nipples when I jump in the water. People must think I’m nuts. But hey, my nipples don’t hurt!

My other problem area is my inner thighs. Not the private areas, but lower down where my shorts rub between my legs with each step. I tend to have a narrow gait width and I think this is why I’m prone to this. Anyway, it only happens when my shorts are really sweaty and the salt in my sweat seems to be the culprit.

The other approach is to use regular running shorts and apply some form of protective lubricant to the affected area. I used to use Body Glide, but lately have been having good success using samples of Hike-Goo and Red11 lubricants that were sent to me (Disclosure: both were free samples supplied for review purposes).

Hike-Goo in particular has been be very effective. It comes out of the tube as a sticky paste, but once applied seems to last a long time. It has prevented thigh chafe whenever I have used it. The one drawback is that it’s kind of messy and I feel like I waste a fair amount with each application since it’s easy to apply too much with the applicator mechanism that they use on their tubes. They also make a product called Run-Goo, not sure how that differs or why I was sent the Hike version. No matter, it works well.

Red11 is marketed for nipple protection, but I have not used it for that since I worry about staining shirts (and the band-aid trick works so well). It has also worked well for use on the thighs. On the plus side, since it is an almost solid paste and comes in a tin, it’s easier to take only the amount that you need as compared to the Hike-Goo.

Personally, the only other area I have had chafing issues is (on rare occasions) under the waistline of my shorts. I’m not sure why it happens when it does (I only experience it a few times each summer), and I almost never notice it while running – I know it has happened when I’m in the shower and water hits the chafed spots. Lubricant typically helps here as well, and I always lube my waistline before long races. (As an aside, if you ever have the opportunity to crew an ultra, you will see runners applying lube all over the place!). I used to lubricate my toes as well, but now that I tend to only wear shoes that allow toe wiggle on longer runs this has ceased to be an issue.

I’m sure there are other areas that are problem spots for other people, and I’m sure women have stories to tell that might differ slightly from those of men. If you have any advice that is not covered here, feel free to leave a comment!

You just finished reading How To Avoid Chafing While Running: Nipples, Thighs, and Other Problem Spots! Consider leaving a comment!