How to Measure Heel-Toe Drop in a Running Shoe

As a follow-up to yesterday’s post on how heel-toe drop (in reality, heel-forefoot drop) and foot length interact to determine the slope of the footbed in a shoe, I thought I’d put up a short post showing how exactly I measure heel-forefoot drop in running shoes.

When I first wrote on this topic a few years back I described a really rough measurement method that involved a bar clamp and a ruler. The method was not very precise, but it worked well enough to get a reasonably good idea of what the sole height differential was.

Nowadays I utilize a simpler and more accurate tool – a digital iGaging C-caliper (also called an outside caliper). Here’s what the caliper looks like:

To measure a shoe, you simply open the caliper up and pinch the sole with the two arms of the “C” like so: 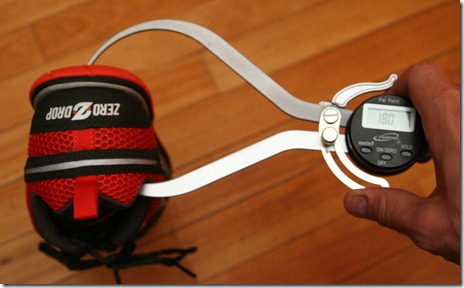 For the heel, I place the tip of one of the arms in roughly the center of the heel, and the other on the outsole immediately below (being careful that the tip doesn’t wind up in an outsole groove which will lead to a thinner sole measurement). Thus, the thickness of the sole is pinched between the tips of the arms, and the distance between the tips is displayed on the caliper output screen.

For the foefoot, I slide an arm between the lateral tongue and the upper as far forward as I can go, thereby pinching the sole roughly under the region of the ball behind the little toe. Here are two photos: 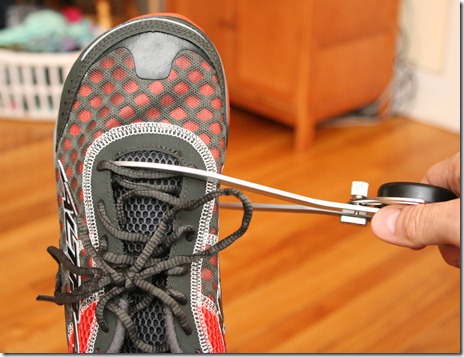 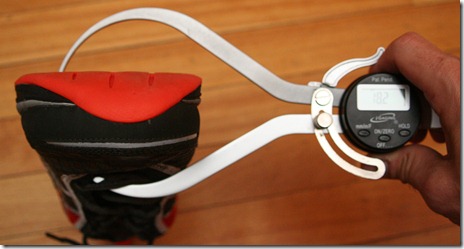 Using this method I measured the sole of the Altra instinct 1.5 at about 18mm thick in both the heel and forefoot (note that the forefoot measure in the photo says 18.2mm – this minute difference is most likely due to the fact that trying to hold the caliper and take a photo at the same time was quite a challenge!).

This method works great for shoes, and also works great for measuring just the height differential of the insole – to my surprise many shoes have heel lift built into the removable insole, and I have taken to swapping these out for a thin, flat one (typically the Skechers GoBionic insole) in many of my shoes.

So there you have it, a simple and easy way to measure heel-forefoot drop in shoes that doesn’t require hacking the shoe in half lengthwise. Should you desire to try this yourself, the iGaging caliper is available at Amazon for about $30.

You just finished reading How to Measure Heel-Toe Drop in a Running Shoe! Consider leaving a comment!