Home / Blog Posts / I Think I’m a Pseudo-Heel Striker!: Study Suggests That As Many as 25-

I Think I’m a Pseudo-Heel Striker!: Study Suggests That As Many as 25-33% of Heel Strikers Exhibit a More Midfoot Loading Pattern

One of the points I’ve attempted to make repeatedly is that there is a lot of variation among the biomechanical properties of heel strikes when we compare runners. As evidence of this I like to point to a photo compilation from the 2009 Manchester City Marathon that I put together that shows just how much the angle between the foot and the ground can vary even among heel strikers:

Over the past few days I’ve been reading my way through the June 2013 issue of Footwear Science (sure to be found on a newsstand near you!). The issue is a compilation of presentation abstracts from the annual meeting of the Footwear Biomechanics Group that was recently held in Brazil. To be honest, I eat this stuff up, and this is probably the first periodical I’ll have gone through cover-to-cover in a few years. There are a ton of interesting studies in the issue (I hope to write about several of them), and one that I found particularly fascinating was titled “Initial foot contact patterns during steady state shod running.”

In the study, a group from Belgium led by Bastiaan Breine set out to examine foot strike patterns among runners using a novel measuring device. What they did was place a pressure sensing plate on top of a force plate so that both underfoot pressure tracings and force application could be recorded simultaneously.

The authors of this study observe that although pressure tracings might be recorded at initial contact, the actual forces at work might be very small and functionally irrelevant. So, in addition to scoring foot strikes by location of initial contact as determined by pressure tracings, they decided to also score foot strikes based on the location of maximal impact loading rate (impact loading rate is the rate of force application and is typically expressed in units of body weights/second). Max loading rate is functionally meaningful in that higher max loading rates have been linked to increased risk of injuries like stress fractures.

So what did they find? Using Strike Index only they found that 45 out of 55 runners were rearfoot strikers and the remaining 10 were midfoot strikers (same pattern on both feet). However, when they used the location of the instant of maximal loading rate to classify foot strikes they found that:

1) On the left foot, 11 of the 45 heel strikers were actually midfoot loaders, and 1 midfoot striker was a forefoot loader.

Below is a reproduction of their figure showing what the underfoot pressure tracings for the various strike patterns look like: 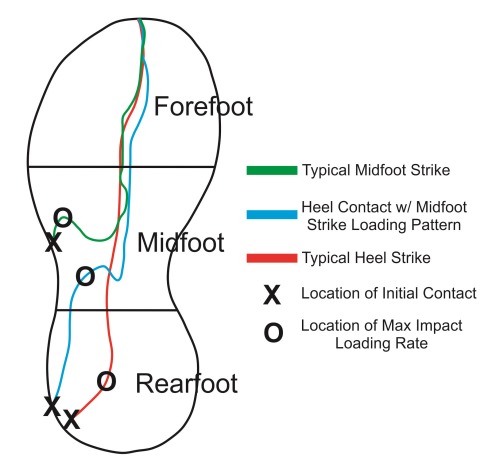 What you’ll note from the above diagram is that the blue and red tracings both originate on the rear, outer portion of the heel indicating initial heel contact. However, things differ from that point on. The blue line moves quickly forward along the outer margin of the shoe and peak impact loading rate actually occurs under the midfoot. The red line veers inward a bit and peak loading rate is squarely in the center of the heel. So, although the initial contact pattern is similar (both are “heel strikers”), the actual loading pattern is very different. The authors feel that those exhibiting a pattern like the blue line should not be considered heel strikers. If the proportions in their sample are reflective of the frequency with which these patterns might be found in the broader running population, it might mean that as many as 25-33% of “heel strikers” don’t actually load much at all under their heels!

My personal interest in this study is that I’m pretty sure that my foot strike tracing would be in the blue-line category, or somewhere between blue and green. I’m a mild heel striker if you look at me on film in most shoes, but when I was running on the force treadmill at Saucony HQ I was told by biomechanist Spencer White that I loaded under the midfoot. This would also seem to explain to me why my wear patterns nowadays originate at outside of the heel and extend forward along the lateral edge, whereas I used to absolutely destroy just the back-most corner of my heels. I suspect when I went through my running form experimentation phase a few summers ago I shifted my tracing from red to blue, and in some shoes (and barefoot) to green. I’m beginning to also wonder if this might explain why I’m so sensitive to heel-forefoot drop in running shoes – given my mild heel strike it seems to not take very much additional material under the heel to start messing with my stride. It would be very interesting to take this group of pseudo-heel strikers and examine how their stride changes with varying shoe properties.

Perhaps the biggest issue that this study might bring up is that any other studies that have compared heel strikers to midfoot or forefoot strikers may not have actually been comparing what they thought they were comparing – it really depends on how the heel strike was classified. If it was done by video or by Strike Index alone there may have been some midfoot loaders in the heel strike group…

You just finished reading I Think I’m a Pseudo-Heel Striker!: Study Suggests That As Many as 25-33% of Heel Strikers Exhibit a More Midfoot Loading Pattern! Consider leaving a comment!