Home / Blog Posts / In Defense of Crocs: A Response to Huffington Post

In Defense of Crocs: A Response to Huffington Post 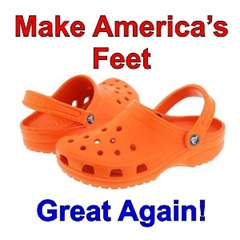 When I look at the pair of Crocs in the photo to the left, I’m reminded of Donald Trump. Orange. Puffy. (Politically) Indestructible. But mostly I’m reminded of how unfairly both have been treated by the media. Terribly unfairly. I’ll leave more politically informed sources to discuss Mr. Trump’s woes (to be honest, I’d rather vote for a Croc than either of our presidential candidates this year), but I feel compelled to come to the defense of the Croc in the face of a vicious media attack from the Huffington post.

This morning I was perusing my favorite source of hard-hitting journalism (the Facebook Trending News list), when I saw a headline that read: “Here’s What Podiatrists Think About Your Crocs.” Not being able to resist knowing what podiatrists think about my Crocs, I felt compelled to click through. The article starts out with some praise, citing Mario Batali’s fondness for the footwear, and even providing some fine investigative reporting by citing an Amazon review that gushes: “They are great at the dog park or in the backyard where I am likely to step in something that is very difficult to clean off sneakers but comes off easily with a hose or a wipe from my clogs.” But the article then devolves into a malicious hit piece. It seems that podiatrists actually don’t think all that highly of Crocs. In fact, they may be the root of all podiatric maladies. Beware the danger lurking in your closet!

Dr. Megan Leahy, a podiatrist at the Illinois Bone and Joint Institute, directs her ire at the lack of support for the heel, claiming that in unstable, backless shoes, “…toes tend to grip which can lead to tendinitis, worsening of toe deformities, nail problems, corns and calluses.” If only Crocs had a back strap that could secure the heel! What a glaring design flaw: 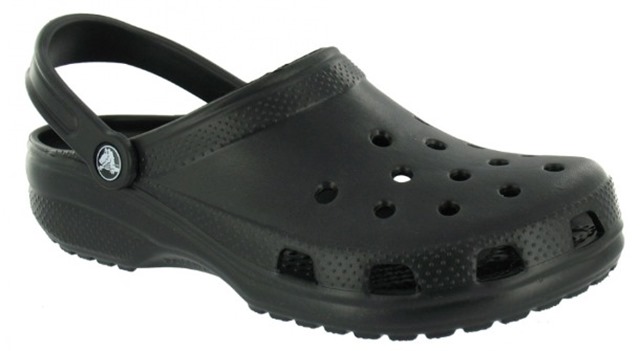 Backing up Dr. Leahy is Dr. Kor, president of the American Academy of Podiatric Sports Medicine. Apparently alarmed at the rising number of athletes opting to wear Crocs in competition, and recent high profile sponsorship deals with the likes of Steph Curry, Lionel Messi, and John Daly, Dr. Kor flexes his sports medicine muscle, and does not mince words when it comes to pointing out the dangers of Crocs: “…on a daily basis, I see patients who come into my office complaining of arch or heel pain and they are wearing Crocs…” Kor doesn’t stop there, he pushes the knife a little deeper by pointing out that “I do notice that children (and even adults) tend to trip and fall more in these shoes.” Who needs research when the observational anecdotes are so damning!

Now, you might think that after reading this you should throw your Crocs out immediately. I say not so fast. I own a pair of Crocs. Well, not really Crocs. Target knock-off Crocs. And they’re black. They cost about $10, and after probably five years of use they look almost as good as new. Not only are they seemingly indestructible, but I have not developed tendonitis, corns, or calluses. I have not gone to a doctor complaining of foot pain in my Crocs. And I have never tripped or fallen while wearing them.

What’s more, as a 41 year old father of three, footwear options to pair with my beloved jorts aren’t all that abundant. It’s pretty much a pair of black Crocs with white socks, or if I’m feeling athletic, a pair of Nike Air Monarchs. I plan to spend my twilight years in comfort. And since Huffpost relies on anecdotes in their attempt to take down King Croc, I’ll add that in my work as a clinical running gait analyst, I have had exactly zero clients show up for an appointment complaining of pain from running in Crocs. Take that!

Finally, let’s not overlook the elephant in the room. Mario Batali loves Crocs. In fact, he apparently ordered 200 pairs when he found out that his signature model would be discontinued (that’s enough Crocs to last several lifetimes!). An enraged Batali steamed: “They’re gonna stop the Mario Batali orange! It’s preposterous!” Preposterous indeed! Mr. Batali is a self-proclaimed fashion icon, and I’m sure he spends an awful lot of time standing in the kitchen in his Crocs. If Crocs are good enough for Mario Batali, they’re good enough for me.

Huffington Post, you’re going to have to pry my (knock-off) Crocs off of my comfortable, stylish feet. Fortunately there’s that little strap on the back to secure them on.

You just finished reading In Defense of Crocs: A Response to Huffington Post! Consider leaving a comment!