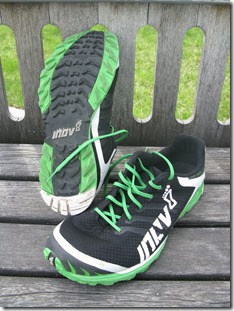 I’ve been looking forward to trying the inov-8 Race Ultra 270 since I first knew it existed back over a year ago.  Details at that point were sparse, but I already liked what I saw from the then soon to be released Race Ultra 290 (which made my list of Top Trail Running Shoes of 2014).

What I liked the most about the Race Ultra 290 was the versatility of the platform, and forgiveness of the ride even on roads (something that is not typically a strength of inov-8 shoes). I assumed most of these characteristics would be preserved in the 270, but with a lower stack height and heel-to-toe drop (4mm compared to 8mm for the 290), and a racier feel.  After many miles, including a 50k in January nearly out of the box, it unfortunately hasn’t lived up to my (possibly too lofty) expectations.  Read on to see why.

Similarities to the Race Ultra 290: Outsole and Protection 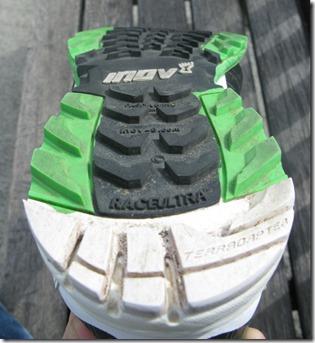 I think it might be easiest to start off by detailing some of the things that are similar to the Race Ultra 290, and some things that aren’t.  First off, as the name indicates, they both share the Race Ultra outsole (typical of inov-8 who usually name their shoes by the outsole type).  It is a mix of various types of rubber that is harder in high wear areas and softer in lower wear and/or areas where more traction is desired.  I really like the outsole design for many types of terrain, and with over 300 miles on my Race Ultra 290 I know the durability is great as well as the performance.  It is nearly as grippy as the Trailroc 245 on loose terrain, but rides very well on hardpack or even roads.

Both the 270 and 290 also have the Gen III meta-shank, an embedded 5-fingered rock plate of sorts, that is also in the Trailroc 245 and 255.  This shank does a great job of protecting against rocks and also helping with foot fatigue on long efforts by providing longitudinal structure without making to the shoe as rigid as a single rock “plate” would.  Both the outsole and meta-shank are high points in the 270’s design.  Unfortunately, to me, that is probably where the greatness ends. 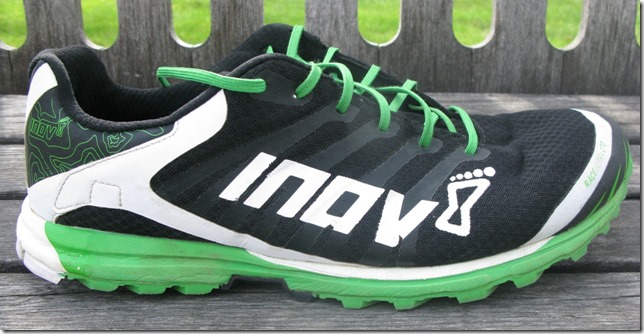 Although you can’t tell from a picture, the midsole feels quite a bit firmer and is less resilient (bounces back less) than the injection molded EVA of the 290 and other inov-8 shoes.

Moving on to the midsole you see the first big difference between the 270 and 290. The 270 is one of very few inov-8 shoes (the only other I know of is the F-lite 235, which is a purpose-built Crossfit shoe) that uses compressed EVA, where as most other inov-8s in the past have used either a standard EVA (mainly older models, but some recent ones like the Roclite 295/282/280) or injection-molded EVA (most of their current lineup including the Race Ultra 290). While the injected EVA is no adidas Boost or adiprene (my personal favorite midsole compounds), I find it on par with much of what is on the market today and arguably more durable (probably from inov-8’s use of full outsoles and denser midsole setups) than many of the compounds used on most modern road shoes.

I’m not sure I can entirely attribute the difference in ride between the 270 and 290 to the type of EVA used, but I’m also not quite sure what else to attribute it to. The 290 ran firm, but was still quite forgiving, and there was noticeable cushion on hardpack trails and roads. The 270 feels as if there is hardly any cushion at all, and runs quite rough to me on hardpack downhills and roads. This is not because of its relatively more minimal stack height as I’ve run many miles in the Trailroc 245, F-Lite 262 and others that have less stack height and they don’t run as harsh on these surfaces. The latter shoes run appropriately firm and minimal as expected.  It also doesn’t mean the 270 is not protective. It is quite protective from rocks, more so than the Trailroc 245 even, but its ride is definitely more unforgiving. I find this odd as on paper it should run closer to the Race Ultra 290, which is one of inov-8s most cushioned and forgiving models. The only thing I can attribute this to is the change to compressed EVA in the midsole. 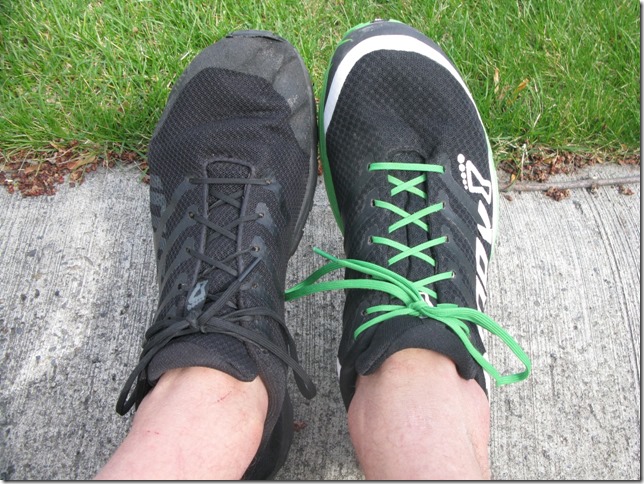 Fit compared to my trusty F-lite 232s (on left).  Notice more bunching of upper of 270 and less conformation to foot due to thicker upper material and stiffer overlays/different shape in heel.

Let’s move on to the upper and fit. The 270 fits a little lower volume in the midfoot than the 290, but has a more spacious toe box feel. The latter is most likely due to the use of all welded overlays instead of the stitched rand of the 290. This was a positive attribute, and it looks like the 290 will be following suit in this regard when it gets an upper update this summer. However, that said, the mesh on the 270 looks to be two layers of mesh mated together – this differs from most of inov-8’s other shoes that use a simple, single layer of mesh.  It is much thicker/stiffer than the Trailrocs and F-lites and therefore runs much warmer than either of those. It is also noticeably less comfortable since it doesn’t move as freely with the foot. Furthermore, the heel collar is quite stiff, slightly higher than either the Trailroc or F-lite collars, and has a significant (for inov-8) counter in it.  I find it adequate, but not ideal and less comfortable by far than either the Trailrocs or F-lites. 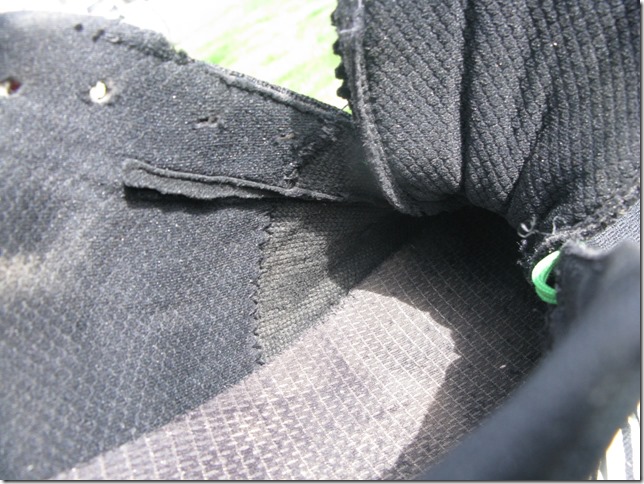 Inside of shoe shows heavy duty lining material from midfoot forward which contributes to the hot upper and stiffer feel.  Granted they will hold up a lot longer, but I think that should be saved for the 290 with the 270 focusing more on lightness and race day comfort/heat management rather than long term durability.

Overall, the inov-8 Race Ultra 270 has loads of potential.  It was probably the shoe I was most looking forward to this spring, but in the end I feel that something got lost in the process of translating the 290 to a lower and racier platform.  I think part of the problem is the EVA midsole foam (compressed vs. injected), but I also feel that the upper design of the 270 is too conservative and ends up being more like the upper that the 290 should have. It just feels overbuilt for a racier shoe like the 270.

I think inov-8 needs to look at why a runner would pick the 270 instead of the 290, and for me it would be for a more racing shoe feel and fit with the rock protection, durability, and versatility that the Race Ultra platform brings. To achieve this I think the shoe needs to have a significantly more stripped back upper (like an F-lite or even the forthcoming Terraclaws) with a single layer mesh and the softer, more fitted heel collar that inov-8 typically puts on their shoes. 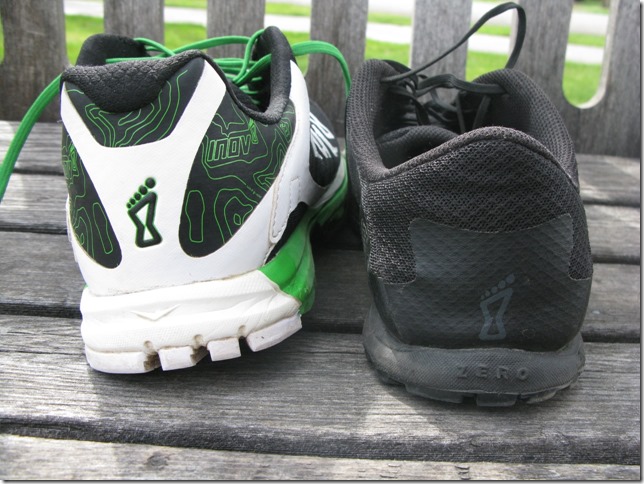 Comparison in heel design betweent he Race Ultra 270 (left) and the inov-8 F-lite 232 (on right).   In addition to the different shape there is a huge softness and comfort difference between the two with the F-lites being far superior in both areas.  Some may argue that the Race Ultra platform needs the upper support (which I would partially agree with for the 290), but I don’t think the 270 does, especially considering how low and wide it is.

Additionally, I’d like to see the 270 with injected EVA in the midsole instead of the compressed EVA that inov-8 decided to use. I personally feel this contributes to the downfall of the ride, and even if injected EVA is heavier than compressed the extra weight would be worth it to me. I make a similar trade off for Boost in adidas shoes, and generally the extra weight is worth it in the quality of the ride.

Despite my concerns, the Race Ultra 270 is still a really good all around shoe, but I would simply recommend the 290 instead because if offers a lot more shoe for a very similar weight (only 20 grams difference even in my size 13s between the two shoes) and features a much better ride.  If you want a more stripped back experience, something like the Trailroc 245 does a much better job while still giving the protection needed for rocky terrain.  I have faith that inov-8 will get this sorted and differentiate the two models better in the future but for now I, unfortunately, can’t wholeheartedly recommend the Race Ultra 270.

The inov-8 Race Ultra 270 is available for purchase at Running Warehouse and Wiggle (UK). Purchases form these retailers help to support this site – thanks!