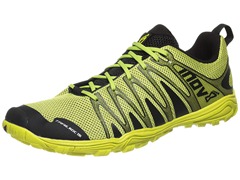 When I think of Inov-8, I think of shoes designed for a purpose, and most often that purpose is to run on rugged trails or fells. Their shoes are typically fairly simple in design, but are very effective at doing their job. Unfortunately, you also often pay a premium for their product.

I’ve run in a number of Inov-8 shoes over the past few years, but I don’t have any of their more luggy trails shoes. In part that’s because I’d heard that their performance last tends to run a bit narrow and I was worried that the fit might not accommodate my foot very well (thanks to The Clymb I now have a pair of F-Lite 195’s and the fit is fine). Thus, when Inov-8 released the Trailroc line on their anatomical last I decided to take the plunge and buy a pair.

The Trailrocs come in three flavors based upon your requirements for protection and heel-forefoot drop. Per Running Warehouse, the Trailroc 255 is a 6mm, 9.9oz shoe drop shoe; the Trailroc 245 is a 9.2 oz, 3mm drop shoe, and the Trailroc 235 is an 8.3 oz, zero drop shoe. All three share a similar lugged outsole, but the Trailroc 245 and 255 have an additional rock plate for added protection. I debated long and hard about which shoe to order, and ultimately decided on the 235 after reading Ashwyn Gray’s comparative Trailroc review on the Another Fn’ Runner blog. Here’s what Ashwyn reports as the main difference between the two shoes:

“I mean, it would take a pretty sharp rock, probably one that’s attached to a high-speed drill, to inflict any kind of damage on your foot through the 245’s sole. And, you know that rock plate is there when you step. It doesn’t poke your feet through the insole, or anything. You can just feel the lack of feeling on the ground…

As a consequence of extra rock protection, the Trailroc 245 shares only a fraction of the 235’s flexibility. Don’t misunderstand, there’s a fine and flexible forefoot in the 245…

So, the Meta-Shank™ rock protection should really be the deciding factor for you here. Do you want a tough midsole that will keep pretty much every sensation of pointyness away from your feet? Or, do you want a shoe that twists and folds readily?

The 3mm differential in the 245 is really not as noticeable as I thought it would be. And, I consider myself fairly sensitive to those things.”

Given that I like flexible shoes, and that I don’t tend to run very rugged trails all that often, I opted for the Trailroc 235 even though I I’m a sucker for a blue and yellow shoe(must be my Swedish heritage…).

I’ve now run in the Trailrocs over just about every terrain I could find. Trails, acorn-sized gravel road shoulders, ice, snow, road, sidewalk, leaves, mud, etc. They have performed phenomenally well on all surfaces. I’d go so far as to say that they’re one of the grippiest shoes I have ever worn (keeping in mind that I don’t own any super-luggy shoes like some of the fell running shoes that Inov-8 makes) – traction is fantastic even on crusty ice and snow.

The sole is what really makes the Trailroc a great shoe. The lugs are prominent enough to provide solid traction, but flat and even enough that you can run comfortably on a flat, hard surface like an asphalt road. As a result, this is an extremely versatile shoe. Stack height is reported to be 13mm in the heel and forefoot, so it’s relatively thin – the shoe definitely feels firm underfoot. The rubber outsole is pretty solid and tough, and as a result I never found the lack of a rock plate to be a big problem. The 235’s offer a lot more protection than say the New Balance MT00, which is also a zero drop trail shoe without a rock plate. I’ve had no issues running over chunky gravel or ice in them – you will feel stuff underfoot, but it’s not the piercing pain you might feel when catching a rock in just the right spot in a less protective shoe. I haven’t run more than 5-6 miles in a single run in these shoes, so your experience may differ if you are a long distance trail runner (which I, as yet, am not).

As mentioned above, the Trailrocs are built on Inov-8’s anatomical last, so it’s a fit I am very familiar with from shoes like the Bare-X 180. The heel and midfoot are snug but not constrictive (midfoot fit is an issue for me with some of the New Balance shoes). Forefoot width is amply roomy, and the upper is stretchy enough to allow my feet to flex up and down without restraint. The upper material is a more traditional soft fabric, not the plasticky mesh that is so popular these days – this is a good thing, though I have seen isolated reports of it tearing in areas adjacent to the overlays along the mid-forefoot. There is no hard, plastic heel counter, just external overlays that wrap around the back of the heel. The insole is removable, but the footbed is not finished underneath so I have only used them with the insole installed. The Trailroc 235 runs true to size for me.

If I have one complaint about the 235, it’s a very minor, mostly cosmetic one. The toe bumper on the shoe is very small, and as a result the material at the tip of the forefoot tends to fold and crease as the shoe flexes. It doesn’t bother my feet, but it makes the shoe look a little flimsy up front. Oh, and the price ($120 MSRP) is a bit steep, but not that far off what other shoes in the zero drop trail shoe niche cost.

The Inov-8 Trailroc 235 is a grippy, zero drop trail shoe that provides adequate protection even in the absence of a rock plate. It works well on varied surfaces from roads to rugged trails, and provides a roomy fit that minimalist runners have come to expect in zero drop shoes. I think highly enough of this shoe that it ranked 2nd on my best hybrid trail shoes of 2012 list – highly recommended!

(Note – for those wanting an even more minimal Trailroc shoe, Inov-8 just release the Trailroc 150. I’ve shared some photos and my first run thoughts on the Trailroc 150 on the Runblogger forum.)

The Inov-8 Trailroc 235 is available for purchase at Running Warehouse and Zappos.

In Europe, they can be purchased at Wiggle.