Home / Blog Posts / Introducing My Book: Tread Lightly: Form, Footwear and the Quest for I

Introducing My Book: Tread Lightly: Form, Footwear and the Quest for Injury-Free Running

About 16 months ago I received an email from a guy named Bill Katovsky asking me if I had any interest in writing a book. I didn’t know him at the time, but I had at least given thought to the idea of writing something more than another blog post. We spoke on the phone a few times, and found that we had a mutual interest in writing about running and exercise (he founded Tri-Athlete Magazine many years ago, co-authored a book titled “Bike for Life,” and more recently authored a book titled “Return to Fitness: Getting Back in Shape after Injury, Illness, or Prolonged Inactivity.” Bill is also a co-founder and editorial director of the Natural Running Center website).

Bill’s initial idea was for me to write the book and he would serve as editor and agent (which he has done for several books by Phil Maffetone), but in our conversations we came up with a concept that was going to be more than I could handle on my own given time constraints associated with my day job and being a father of three little kids. So, we agreed to co-author a book and divided up the topics that we wanted to hit upon. After a sometimes grueling process (as I hear any book-writing experience can be), Bill and I finally finished our book last month (which involved a marathon editing session while I was on vacation with my family in Disney World!).

The end product of our labors is a book titled Tread Lightly: Form, Footwear and the Quest for Injury-Free Running. The content will not come as a surprise to readers of this blog (or Bill’s Zero Drop blog). We basically address the question of why modern runners so often get hurt. We don’t pretend to provide an answer that will “cure” running injuries, but we do take what we feel is a fairly balanced look at topic as it relates to form, footwear, and food (and much more). This is by no means a barefoot running book (far from it!), or even necessarily a minimalist running book. Rather, it is a book that attempts to look at how modern humans differ from our running ancestors, what both history and modern science tell us about form, footwear, and injuries, and how this knowledge might be applied to reduce your chances of getting hurt. A lot of the questions we address still have incomplete answers, but our hope is that our writing will stimulate continued thought, research, experimentation and discussion.

Over the coming weeks you will hear more about this book, and I’ll likely post a few excerpts leading up to the official release date (June 1 according to Amazon, but could be a few weeks earlier if the current schedule holds. For now, I’ll provide the chapter titles to give you a feel for the breadth of topics that we cover:

Chapter 1 – The Evolution of Running in Humans

Chapter 2 – Running Injuries: Why They Happen

Chapter 9 – Turning the Clock Back on Nutrition

If you are interested in pre-ordering a copy of Tread Lightly, you can do so on Amazon.com. I don’t have official confirmation that a Kindle version will be released, but I assume that this will happen (I read most books on the Kindle app on the Iphone these days, so I plan to push for it). If you’d like to help this process along, you can go to the Amazon page for Tread Lightly and click on the “Tell the Publisher: I’d like to read this book on Kindle” link just below the cover photo.

Thanks to all of you who read this blog and have offered your support over the past few years – I owe much of the thought process that led to the book’s evolution to discussions that I have had here!

Below are the front and back covers of Tread Lightly: 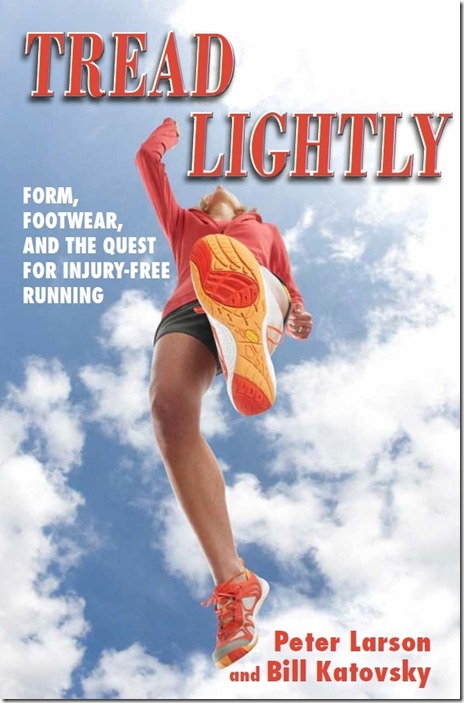 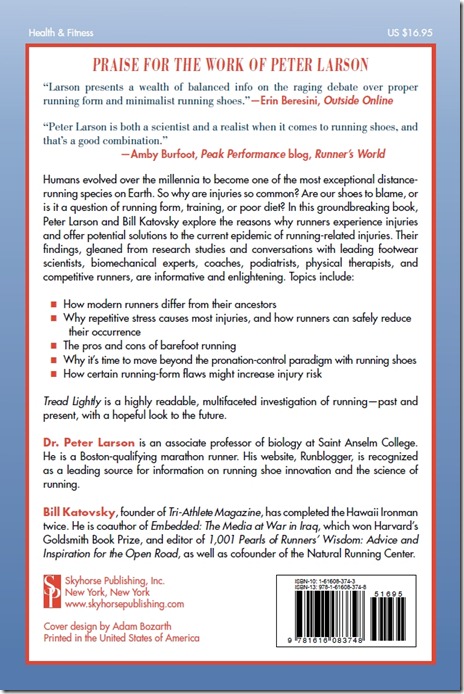