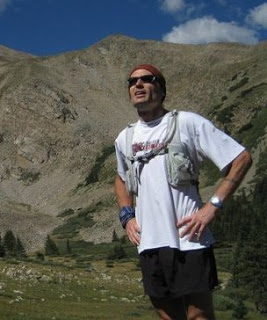 After 4 years of managing, editing, designing, and writing Runblogger entirely on my own, I’ve decided in 2013 to enlist a bit of help. One of my limitations is that I don’t run a lot of trails (at least not yet). I hit the trails behind my house on occasion, but rarely for long distances, and I’ve only run one trail ultra in my life (a 50K). As such, my reviews of trail shoes are limited mostly to those that work both on and off road, and my ability to write informed posts about the ins and outs of trail running are limited as well.

Given this, I asked my buddy Nate Sanel if he’d be interested in writing a trail-oriented column for me in 2013. Nate lives a town over from me, and has a shoe collection that rivals my own. We have worked collaboratively with shoe companies as wear testers, and chat about shoes often. When it comes to trail shoes, I respect his opinion as much as anybody else’s. Nate’s preferred race distance is 100 miles (I crewed for him at the VT100 last year), so he has the background to know what’s needed in a shoe that stays on foot for multiple hours over rough terrain. It also helps his ability to review shoes that he can load miles onto shoes really quickly

With that as an intro, I’ll let Nate take over from here:

Allow myself to introduce…myself (in my best Dr. Evil voice).  My name is Nate Sanel.  I am a business owner, family man, blogger, occasional motivational speaker, and many other things.  And oh yeah, I like to run.  A lot.  In just the last three years I have run almost 10,000 miles.  Most of those miles have been on trails.

When I was younger I was consumed with riding bicycles.  After growing up on BMX bikes I started riding and racing Mountain Bikes.  I developed a deep love for being in the woods, flying up and down trails.  Unfortunately all of that riding led to knee troubles and much less riding.  Growing my business became all consuming and soon I realized that I was gaining weight and was more anxious than ever.  I needed to exercise!!  I decided that I would start running.  My first run was in 2005 and I went 2 miles.  And then I couldn’t walk normally for a week because I was so sore afterwards.  But for some reason it didn’t hurt my knees, so I kept at it.

I told my wife that even though it was a great workout, running was stupid.  I didn’t want anybody to see me because I thought that I looked like a dork. She replied that I would be racing in no time.  She understands my personality and knew that it would become a burning passion.  I, on the other hand, hated it.  But I kept on doing it and soon found myself pushing to go further.  I’ll never forget my first 10 mile run.  It was my big goal and the feeling I got when it was finished was a huge rush. As I took my running off road, I realized that the same love I had for flying down the trails on my bike was exactly the same as being on foot.  And I fell in love with running off road.

In April of 2006 I ran my first race, a 1/2 marathon.  Then in September my first marathon.  After that I discovered that there were people that ran FURTHER than a marathon and was intrigued.  So three months later, in December, I ran my first 50k. Now I had been fully bitten by the bug. I set my sights on a 50 miler for the following year. In 2007 I ran the VT50 as my first 50.  In 2008 I started running 100 mile races and to this day have run some of the classics such as Western States, Leadville, Vermont and more.  For 2013 I have my sights set on doing only 2 or 3 100 milers, but trying to improve my performances.

I met Peter from Runblogger in 2008 while attempting to run 124 miles across the state of NH.  Pete ran with us a bit and I learned about his blog and love of shoes, gait analysis, etc.  Since that time Pete and I have shared our compulsion for finding the perfect shoe.  I’ve been writing shoe reviews as well as race reports at my blog, www.bikernate.com for the last several years. I’m honored to be writing a column for Runblogger this coming year.  I will be writing about anything to do with trail running.  From racing, training and diet to shoe and trail running gear.

Feel free to let us know about any topics you would like to read about as well!