Is Forefoot Running a “Cure” for Chronic Anterior Compartment Syndrome?

We’ve all been waiting for data to trickle out regarding actual outcomes from studies that have employed gait modification for the treatment of specific running injuries. Those data are now starting to appear.

Diebal et al. indicate that accepted belief as to the cause of compartment syndrome is “that exercise increases intramuscular pressure, which in turn compromises circulation, prohibits muscular function, and causes pain and disability in the lower leg.” They go on to state that “As the problematic exertional activity (typically running) continues, compartment pressures incrementally increase, which presumably causes increasing lower leg pain, sensory abnormalities, and muscle weakness, eventually resulting in a premature cessation of the activity.”

The Mayo Clinic website reports that “Conservative treatments typically don’t help with chronic exertional compartment syndrome. However, surgery is usually successful, allowing you — whether you’re a recreational or serious athlete — to return to your sport.” The surgery mentioned is known as a fasciotomy, and involves cutting the connective tissue sheaths surrounding the swollen compartment to reduce intracompartmental pressure (fair warning – if you have a strong stomach, you can see gruesome photos of this surgery here). Surgery can successfully treat the condition, but side effects are possible, recovery time can be extensive, and lets face it, if you can avoid having your leg sliced open that’s probably not a bad thing.

Thus, the goal of this study was to determine whether an alteration in running gait could serve as an effective, and more conservative, alternative to surgery for the treatment of CECS. Previous research suggests that ankle position can influence intracompartmental pressure (ICP) in the anterior compartment (e.g., forefoot running decreases anterior compartment pressure, and ankle dorsiflexion increases ICP in the anterior compartment). Furthermore, the authors report that forefoot running has been shown to reduce eccentric activity in the tibialis anterior muscle (eccentric contraction is that which occurs while the muscle is lengthening, such as during the post heel-strike foot slap).

The tibialis anterior, shown in red in the image to the left (image via Gray’s Anatomy and Wikipedia), is the major dorsiflexor of the ankle and is found on the front, outer portion of your shin (it is the largest muscle of the anterior compartment; other muscles in the compartment include those that extend your toes upward). The idea is that by having patients with CECS adopt a forefoot striking running style, they would reduce pressure in the anterior compartment where this muscle is located, reduce eccentric activity in this muscle, and thereby reduce pain and disability associated with the condition.

The researchers recruited ten patients with CECS who were candidates for surgical intervention (as determined by an orthopaedic surgeon) – all were physically fit members of the military, and all had experienced symptoms for at least six months. Furthermore, all were confirmed as heel strikers, and pain onset occurred with less than five minutes of running.

After taking a battery of pre-intervention measurements {e.g., ICP, ground reaction forces, step length and rate, 2-mile run time, run distance before severe pain onset (up to 5km) etc.}, the subjects went through a training program to instruct them to forefoot strike with an increased cadence (3 steps per second, 180 steps/min). They also performed a variety of drills taught by the POSE method of running, and did some barefoot running and were cued to “run quietly.” Training sessions occurred 3 times per week for 6 weeks (45 minutes each session).

After the six week training period, the subjects went through a repeat battery of tests to determine the effect of the change in running gait. More interestingly, the researchers also did a minimum one-year follow-up with each patient to determine if the intervention had lasting success. Here’s what they found: 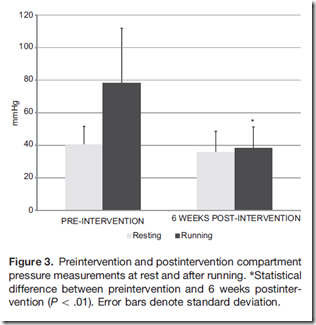 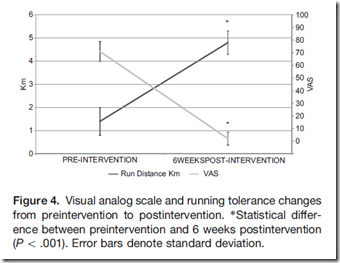 4. At the one-year follow-up, 8 of the 10 patients reported that they were running a minimum of 5 km two to three times per week. The two exceptions were due to a torn ACL suffered while playing soccer, and a sprained ankle – neither of these individuals reported running limitations prior to the subsequent injuries. Mean 2-mile run times were significantly faster at the one-year follow-up.

5. All patients reported that they were able to participate in sports without limitation following the intervention.

6. Perhaps most importantly, none of the patients required a fasciotomy.

The results of this study are striking in that they are so uniformly positive, which somewhat overcomes the limitation of a small sample size and lack of a control group. For a condition that typically requires surgical intervention, to have ten individuals who were candidates for surgical intervention avoid surgery and return to normal activity levels as a result of modifying their gait is a very encouraging result. In fact, all but one of the ten individuals were able to complete the entire 5km run test with virtually no pain after the six-week intervention period, and follow-up after a year indicated that any changes that occurred during the intervention were retained long-term. I’m always hesitant to call anything a “cure,” but it’s hard to argue with these results.

The strength of these results suggests that gait modification could become a first-line treatment in the management of anterior compartment syndrome, and suggests that surgery need not be the fate to which sufferers of this painful condition must succumb.

It is also encouraging that these patients appear not to have experienced negative outcomes from the gait modification – altering foot strike and other aspects of stride can have unintended consequences, and it’s important to keep this in mind when applying an intervention such as this. For example, another study that looked at the effects of forefoot striking (via POSE technique) found increased power absorption and eccentric work at the ankle in POSE runners, but that study stipulated that runners not let the heel touch the ground (almost all runners I have observed let the heel touch down after initial forefoot contact). Given the mix of methods employed in the current study (cadence training, POSE drills, barefoot running), it’s hard to know exactly what the resulting form changes looked like. Nonetheless, we don’t want to simply trade compartment syndrome for Achilles tendinopathy or a metatarsal stress fracture, and it is encouraging that this appears not to have happened.

One of the reasons why this study is so gratifying is that it shows that applying biomechanical knowledge of the running gait to a particular injury can lead to a promising new therapeutic intervention. We know that heel striking increases pressure in the anterior compartment and probably works the tibialis anterior harder relative to forefoot striking. Thus, it makes logical sense that avoiding a heel strike might reduce symptoms associated with CECS and possibly “cure” the condition – it would appear that this is exactly what happened. What we don’t know for certain is whether a similar intervention might work for other conditions where the link between biomechanics and pathology is less clear. We also don’t know for certain which aspect of the running form change is responsible for these positive outcomes – was it the forefoot strike, or perhaps the reduced stride length or increased cadence that had the biggest effect. Hopefully future studies will attempt to tease this apart.

To end, I’ll note that a few months ago I listened to a British Journal of Sports Medicine podcast interview with Dr. Andrew Franklyn-Miller – he also reports success of gait retraining for the treatment of compartment syndrome, so we may really be onto something here…