Home / Blog Posts / Is Heel Striking Evil?: More Evidence that All Heel Strikes Are Not Eq

Is Heel Striking Evil?: More Evidence that All Heel Strikes Are Not Equal 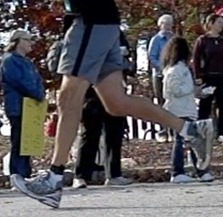 We humans like tidy little categories. With running shoes we like to take the diversity of options out there and categorize things as neutral, stability, motion control, lightweight, minimal, etc. without considering that shoes within each category are sometimes so variable as to make the category as a whole meaningless. For example, the business world includes both the Nike Free Run+ 5.0 and the Vibram Fivefingers in the same category (minimal/barefoot), which makes little sense either structurally or functionally (it’s a marketing category if anything).

The same approach is applied to the running foot strike – we classify foot strikes as forefoot, midfoot, or heel, but the reality is that there is a huge amount of variation within each of these categories. For example, some forefoot strikers bring the heel down after contact, others don’t. The distance of the foot from the center of mass at initial contact varies. Joint angles vary.

I’ve long said that all heel strikes are not created equal. Some people land with the foot angled 45 degrees to the sky with a virtually locked knee, others touch down just slightly back toward the heel with a more or less vertical shin. There are lots of variants in between.

Below is a photo compilation of foot strike variation from slow motion video (300 fps) that I shot at the 2009 Manchester City Marathon. You can see variation from heel strike down to midfoot as you look from top to bottom (I trimmed off the forefoot strikers to reduce the image size) – all are at the first moment of foot contact with the ground:

What you can see above is a lot of variation in foot dorsiflexion at contact, shin orientation, knee angles, and so on.

What we’ve lacked until now is a good sense of how the different flavors of heel strike differ in terms of the way forces experience during running. I was reading through a summary of studies to be presented at the upcoming ACSM meeting on Steve Magness’ blog (great post, check it out here) and came across a study titled “Influence of Different Rear Foot Strike Strategies on Impact Force During Running.” This study was conducted by John Mercer and Sarah Horsch at UNLV – it is currently only an abstract, so one must keep that in mind, it has not been published in a journal yet.

What Mercer and Horsch did was instruct runners to run over a force plate with either “an obvious heel strike (OHS) or subtle heel strike (SHS).” Instantaneously forced stride change studies like this need to be interpreted with caution, but what they found was that at a constant speed the runners exhibited an impact force in both conditions about 85% of the time, but that impact force was significantly higher in the obvious heel strike condition (1.68±0.54 BW for OHS vs. 1.55±0.44 BW for SHS; p<0.05). They conclude that “The unique observation of this study was that impact force was influenced by foot strike patterns that would both have been considered rear foot strike patterns.”

The significance here is that it shows that impact force can vary significantly even within a single foot strike category. You might look at the heel striking data and say “Well, forefoot strikers usually have no impact, so that must be the way to go.” Not necessarily. In a study where runners were told to forefoot strike without letting the heel come down, their tibial acceleration was actually higher than when they landed on their heels (study PDF here). Jay Dicharry often makes the point that in his clinic he sees forefoot runners with high impact, and heel strikers with low impact. And, another Abstract from the ACSM meeting reports no difference in self-reported injury rates between confirmed heel-striking and non-heel-striking US Army soldiers. This contrasts with an earlier finding that forefoot-striking Harvard runners were less prone to injury.

So even among forefoot strikers there is variation, and we have no consistent and conclusive evidence that one foot strike type is better than another from an injury prevention standpoint. What’s more, we really have no idea at what magnitude impact force becomes a problem. In fact impact force magnitude has not reliably been linked to injury as far as I’m aware. Rather, impact loading rate, which is the speed at which the force is applied, has been linked to stress fracture risk. Mercer an Horsch did not report on loading rates in their abstract. It might actually be the case that some impact is a good thing for stimulating bone strength via remodeling.

So, the point I’m trying to make here is that saying “heel striking is bad” makes little sense since foot strike categories encompass a lot of variation. Some kinds of heel striking might be bad, other kinds might be just fine. You could be a forefoot striker and be exposing your tibia to more shock than if you were heel striking. There’s more to the running stride than simply which part of the foot first contacts the ground, and this is why I’ve moved away from focusing on foot strike except in certain very specific cases (e.g., I think a forefoot strike might help runners suffering from anterior compartment syndrome or chronic anterior shin splints).

As always, things are more complicated than a one size fits all prescription. Each individual is a bit different and needs to be handled accordingly.

(If you’re interested in a drier take on foot strike by me, here’s an article I wrote for Lower Extremity Review)

You just finished reading Is Heel Striking Evil?: More Evidence that All Heel Strikes Are Not Equal! Consider leaving a comment!