Jack the Running Dog is Injured!

Poor Jack!!! – my faithful canine running partner has sustained a foot injury and is now going to be sidelined for a few days. He was playing with his best dog buddy and apparently had split a toenail in half at some point during their romp. Unfortunately, I didn’t know until after we had returned from our 5+ mile run when my wife said that she had found a trail of bloody pawprints on the porch after we left. While I’m happy the injury didn’t occur on the run, I feel awful that I made him run 5 miles on a bad toe! 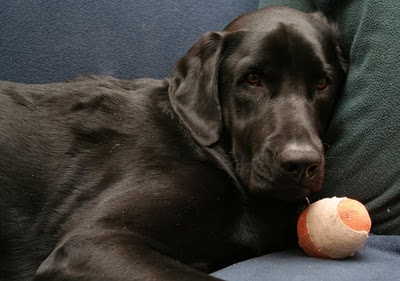 Fortunately, I don’t think Jack feels pain (he is a black lab after all), and he showed no ill effects while we were running. However, the blood spattered on my shoes indicated that it must have been coming out pretty good while we were out there. Thankfully, after a short trip to the animal hospital he’s all bandaged up and has been prescribed a few good days of R&R – looks like I’m going to be on my ow out on the roads for a bit. Here’s wishing Jack a speedy recovery! 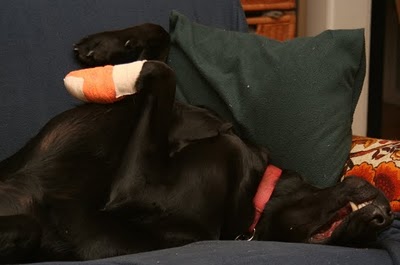 Jack demonstrating the proper way to do the “E” in RICE