I’ve come to the realization that despite my best efforts, there’s no way I can singlehandedly review every minimalist shoe out there. Not only is the market now flooded with them, but I’ve found that constantly rotating through shoes that vary widely in construction on every run tends to be a bit hard on my feet and legs (I’ve run in over 40 pairs of shoes in the past 2-3 years!). So, in an effort to preserve my health, yet still provide reliable information on as many shoes as possible, I plan to occasionally post guest reviews of shoes that I have not had a chance to try out for myself. I recently featured a guest review of the Saucony Hattori by French minimalist runner Frederic Brossard. Fred is a freelance writer and shoe reviewer for France’s top running magazine “Jogging International,” and also writes for the website http://runners.fr. Fred kindly offered to allow me to post his reviews of a few other shoes that he’s had a chance to put some miles on. In this post, Fred shares his thoughts on the Keen A86 trail running shoe.

Review of the Keen A86 Trail Shoe

Keen isn’t a well known brand in France, especially when talking about running shoes. When I discovered the colourful and flashy A86 on an American website, I never expected it to be sold in our country, where reputation and experience really matter. I was wrong. However, I think it the A86 will have a hard time finding a following among French runners since it is not being distributed in specialty running shops.

The A86 falls into the minimalist trail running shoe category, although its heel-forefoot drop is a bit more than 6mm. Its weight is 270g (9.5 oz in size 11.5 US), and the toebox is rather wide, even if it’s a bit tight for my big toe. The latter is an issue on rocky or unstable ground, and may cause blisters. The sole (under toes = 9mm) is quite flexible, but won’t provide the same level of ground feel as something more minimal like the New Balance Minimus MT10. 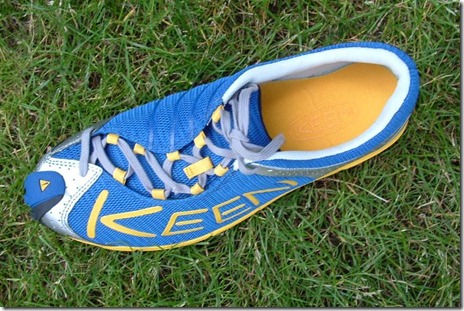 A review of the A86 must start with its design. The blue and yellow version that I own really stands out from the pack. The asymmetrical lacing system may seem a bit odd (see photo above), and like an unusual embellishment, but it is indeed really efficient and contributes to the overall comfort of the shoe. The mesh of the upper is breathable and lets air come in, thus it is neither waterproof nor water resistant. Some structural elements, like the reflective bands on the rear portion of the shoe, give a bit of stability around the heel. The insole (2.4 mm thickness) is removable, but I recommend keeping it in for comfort, especially when using the A86 barefoot. The front of the shoe is protected by a small bumper – not sure whether it would be sufficient to protect your toes from rocks. The circular, angled, 3mm high lugs on the outsole are unusual compared to those typically found on other trail running shoes (see photo below). However, I found them to be surprisingly efficient, except on muddy ground where the going became a bit slippery and treacherous in the A86. Traction is very good provided the ground doesn’t get too wet. 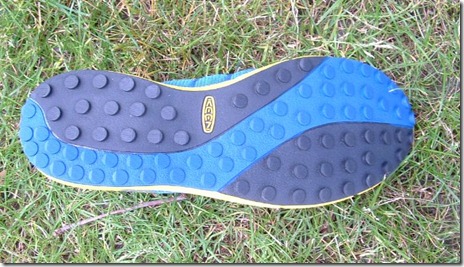 I’ve run about 200 km in the A86 so far. A few kilometers on roads, but most of them on light rocky tracks. Weather has been quite dry in France except for the last few days, which allowed me to push the A86 to its wet ground limits.

Let’s say it clearly: the A86 isn’t designed to help you reach your best time ever on very technical ultra trails. I would label it as an “enjoy the pleasure of a cool trail run” shoe. Using them on roads isn’t a good idea, not because they’re uncomfortable on the hard surface (quite the contrary), but because road running will quickly wear out the grips under the sole. 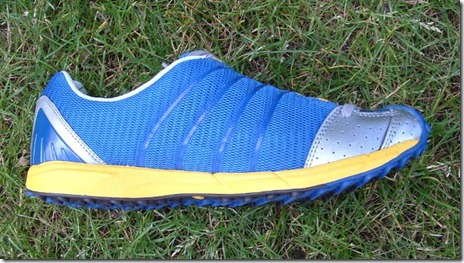 On dry and sometimes rocky tracks, the sole proved firm and protective, but flexible enough to allow a ball of the foot strike. Despite its thickness, the sole gives a good sense of what lays on the ground. The A86 is a good choice for transitioning light heel-strikers because it comes with a little bit of cushioning under the heel. The shoe is very comfortable, but as I wrote before, I would like to have a bit more space for my big toes, which began to hurt on a very hilly run. Stability, contributed primarily by the flat, one-pieced sole and the structural elements on the mesh, is nearly perfect, and I never encountered any ankle twisting on trails. However, the A86 isn’t tailored for high speed trail runs where you need some more protection from the shoe.

If you’re looking for a nicely designed minimalist trail running shoe to be used during cool runs on gentle tracks and also perhaps wear as an all day shoe – pay attention to your son, he may steal them to go to college! – then the A86 is made for you. Less extreme along the minimalist scale than a Merrell Barefoot Trail Glove or a New Balance Minimus MT10, I think the A86 may also be a good transitioning shoe for would-be minimalist trail runners.

For an alternative view, check out the Keen A86 review over on the Zero Drop Blog.