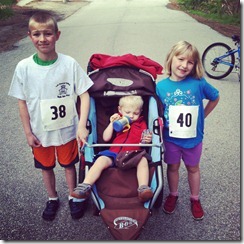 If you’re looking for information on whether to consider putting your kids into minimalist running shoe (and my answer would be yes, you should consider it, as well as lots of barefoot time), you need look no further than the September 2012 issue of Running Times Magazine.

In the issue of RT, my good friends Jay Dicharry (a physical therapist) and Mark Cucuzzella (a family doctor) wrote a multifaced guide to minimalist running as it relates to the little ones. There are multiple articles, a guide to what to look for in kids shoes, reviews of selected minimalist kids shoes (I’ll share some of my thoughts on these soon – you can find some of my top picks in the Zappos ad in my right sidebar), and even a summary of a pilot study on the effects of footwear on the running gait of children.

I highly recommend that you check it out (full text of the article is available on-line) – here’s an excerpt from one Dicharry’s opening article about childhood foot development and how it relates to footwear:

In essence, we still practice the ancient art of Chinese foot-binding. Glance over at the foot of any newborn and you’ll notice that the widest part of their foot is not the ball of the foot but their toes. Then take a look down at your foot. You’ll likely notice that these feet don’t look the same. The narrow toe boxes in athletic and fashion footwear have changed the alignment of our feet, just like braces once did to legs. We’ve been taught that a pointy shoe looks normal — both fashionable and fast — and we’re willing to change our foot shape to accommodate this look.

In addition to shoes that bind the foot and change its shape, we typically put kids in shoes that are too stiff to allow natural flexion. Typical running shoes are produced for a man weighing 150-plus pounds and a woman weighing 130 pounds or more. Many of the same materials are used in the construction of shoes meant for kids who weigh a fraction as much. And the smaller physical size means that all that stitching and those material attachment points net a much stiffer shoe than the adult versions. Kids don’t have the physical weight to flex these shoes.

Is this a problem? Yes. The foot is designed to move. And that movement helps strengthen the muscles, which in turn impact the changes in our natural alignment throughout our development.

I’ve had the privilege of working with a number of runners who grew up sans shoes, and their feet are different from ours. As adults, these runners don’t rely on stiff shoes because they’ve developed strong, stiff feet. Years of barefoot movement have resulted in robust muscular attachments to anchor and stabilize the foot. The average Western foot — having grown up dependent on shoes — pales in comparison.