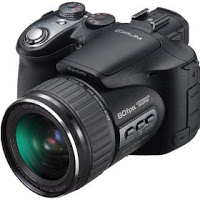 I’m fortunate that my line of work allows me to purchase gadgets that let me do some pretty cool things.  This year, I have seven research students who will be working with me, and several of them are very interested in studying the mechanics of running and cycling.  With the allotment of research funding provided to me as a result of supervising these students, I was able to purchase a digital camera that is capable of shooting video at ridiculously high frame-rates (up to 1200 frames per second).  In a market where research grade high-speed video cameras usually cost upwards of $5000-$10,000 or more, the camera that I purchased, a Casio Exilim EX-F1, is fairly reasonably priced (under $1000.00) given what it can do.  After receiving it in the mail yesterday, I couldn’t resist the opportunity to bring it home over the weekend and give it a test run.

I’ve posted fairly often of late on the recent trend in the running community toward more minimalist footwear.  With the increasing number of people giving barefoot or barefoot-like running a try, I thought that a few professional barefoot runners would be worthy subjects for my first high-speed video shoot. Who are these intrepid souls? My children of course!  For my 5 year-old son and 4 year-old daughter, traveling sans footwear is the preferred mode of locomotion. Should the need to wear shoes arise, Crocs are their preferred choice of footwear, though even getting them to slide into those hideous hunks of foam can be a challenge when trying to get out of the house in a hurry.  My kids will run barefoot over just about any kind of terrain (and running is the preferred speed for them), including up the asphalt street with me as I leave on my own runs. They’ve never seemed to suffer any ill effects from this, and it is for that reason that I wanted to see just what is going on with their stride and footstrike when they run barefoot.  Here are my very preliminary results:

5yo Running Barefoot on Asphalt from Pete Larson on Vimeo.
Slow motion video of my 5yo son running barefoot on asphalt. Appears to be midfoot striking most of the time (one clear heel-strike apparent). Video taken with a Casio EX-F1 at 300fps.

5yo Barefoot Running in Grass from Pete Larson on Vimeo.
Slow motion video of my 5yo son running barefoot in the grass. Appears to be midfoot striking most of the time. Video taken with a Casio EX-F1 at 300fps.

5yo Barefoot Running in Grass – Single Footstrike from Pete Larson on Vimeo.
Slow motion video of my 5yo son running barefoot in the grass – single footstrike. Heel swings forward, but landing appears to be on midfoot. Video taken with a Casio EX-F1 at 300fps.

5yo Running in Crocs on Grass from Pete Larson on Vimeo.
Slow motion video of my 5yo son running in Crocs on grass (his preferred footwear). Looks like mid-foot striking. Video taken with a Casio EX-F1 at 300fps.

4yo Running Barefoot on Asphalt from Pete Larson on Vimeo.
Slow motion video of my 4yo daughter running barefoot on asphalt. 4 footstrikes – looks like heel, mid-foot, mid-foot, forefoot. Video taken with a Casio EX-F1 at 300fps.

To my still relatively untrained eye, it appears that in almost all cases my kids are striking with their midfoot when they run barefoot.  Although the heel swings forward and appears to touch down first in some cases, when the foot plants it seems that the entire sole is contacting almost simultaneously.  Int the final video of my daughter, you can see the distinction between a heel strike, mid-foot strike, and forefoot strike quite clearly.  My suspicion (soon to be tested) is that given the proximity of the heel to the ground as the foot swings forward, adding in a pair of sneakers with a thick heel would force a heel strike in most cases, which would support the argument that modern, cushioned, thick heeled running shoes force people to be heel-strikers.  My hope is that as we begin to collet more data, we’ll be able to post it here and elsewhere in order to chronicle our journey into this fascinating topic.